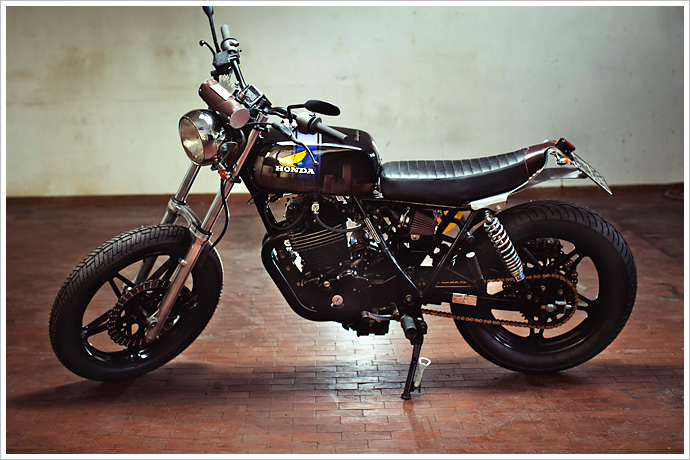 Big 500cc thumper engine. Good ground clearance. Hell, the FT in FT500 stands for flat tracker. It’s a good start for a custom build, that is if you are able to see past the 80s plastic fantastic styling, and even more unique if you keep the ‘Comstar’ styled wheels, even though they aren’t the most popular option. Lorenzo Buratti could see past all that, his latest build a 1982 Honda FT500 named ‘Metropolitan’. Here is the build concept in his words: ‘it’s all about a city playbike, light and manoeuvrable in traffic, low seat, something different to the hundreds of café racer styled bikes’. Café racer it ain’t, but it would sure cut a mean image tearing down city streets, and the sound would definitely match the imagery. Starting out with the commuter friendly FT, this model of bike was chosen because of it’s light and agile frame, reliable engine and low seat height. The factory fuel tank was discarded, an Aermacchi Harley Davidson unit sits in it’s place, airbrushed with a city skyline to keep with the ‘Metropolitan’ motif of the bike. Perched behind the tank is a seat leftover from a previous scrambler build, recovered in leather and mounted backwards, with 3 inch thick leather attaching it to the tailpiece. Also fashioned from leather, to make the bike rather unique, is the dashboard cluster, something Lorenzo admits ‘not all people can agree on that’. Performance modifications include a K & N filter, and another remnant of the scrambler build, the awesome frame hugging silencer. To be able to perform in city streets the way Lorenzo envisaged, the bike is fitted up with Hagon shocks on the rear, the original rims being repainted black and retained for the build. In a special touch, the stock brake discs have been re-profiled with holes, then machined in a CNC mill. The headlight, originally fitted to a Ducati Monster, sits beneath a wider than factory set of handlebars. From rather plain beginnings, Lorenzo Buratti has stripped away a lot of the pretence asked of bike aesthetics in the 80s, and shown that ‘hidden beauty’ can be something to consider when looking at a bike to modify. The Buratti workshop is a fan of mixing aesthetic quality with functionality, for instance in regards to the ducktail: ‘All the back is built up, starting from an aluminium sheet, just hammered and polished by hand. A very light one, not just about the weight, but I try to do something light also for the eyes’. And all this with the premise of building something with style, using the tools at hand in his garage. It’s inspiring that Lorenzo Buratti could see past the acres of plastic, past the rear guard that seems to go on forever, to see a beautiful diamond, hiding in a polyethylene rough.