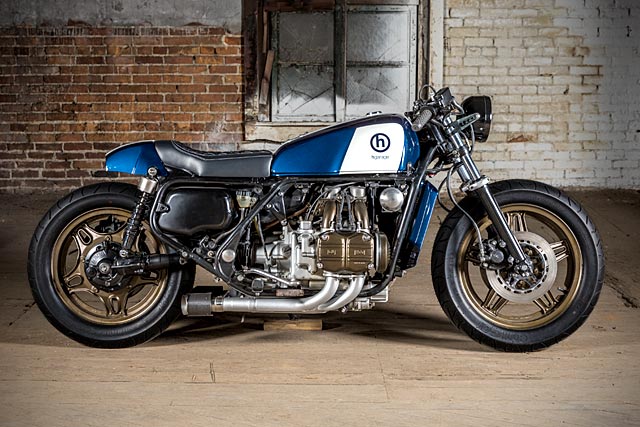 Despite what your over-active imagination may be telling you, the Vampire Squadron was actually an American Airforce group based in Guadalcanal during WWII. Their plane of choice was the unique Lockheed P-38 Lightning. A ‘twin boom and a central nacelle’ design, the aircraft stood out amongst its contemporaries like the dog’s proverbials. Cue Honda’s similarly unique flat four Goldwing. A little BMW, a little Moto Guzzi and a whole lot of engine capacity, it’s a bike that still occupies the outer fringes of the custom scene. But not if Kentucky’s Scott Halbleib has his way. “After enough Goldwing decompression from the 1000 I built in 2015, a client called wanting to resurrect his ’83 model,” Says H Garage owner and builder, Scott. “It was pretty mangled from an accident the year prior, but he was ready to get back on the horse and had been inquiring about an H Garage build for a few years”. The front end was replaced, mechanicals looked over and test rides taken. The all clear was given and it was ready to enter the chop shop. The available budget dictated a wise use of time and funds; lofty ideas were brought down to reality and a general concept was agreed upon to get things underway. The theme was a bit of the old school hot rod vibe: low, loud and aggressive. “First it was off with the stock faux gas tank and over to the H Garage shelving containing a decent collection of old tanks acquired over the years. After numerous measurements and some test fittings, it was determined that a Suzuki GS750 tank would add some nice shape and a more custom look over the rather bland stock item”.

“So the tunnel and the bottom of the gas tank was trimmed out and a hole was cut to access the stock gas cap below. The relocation of some electrical components and a swap to a smaller coolant overflow reservoir meant everything was sitting in its right place. Then a custom trim ring was water-jetted for the tank’s finishing touch. Rather than fill in the stock gas cap hole, it was trimmed out a little and a fuel gauge was mounted”. Then on to the seat and tail section. The decision was made to reveal some of the frame, have the seat taper out towards the back and then to fab up a custom tailpiece that would drop over the seat and shock mounts. Raised panels were worked in to match the new gas tank with a recessed tail light tucked in behind. Then the seat was upholstered with a simple diamond-shaped stitch by local friend Mike Brewer. “The front end was cleaned up, wiring re-routed, and a new headlight with built-in turn signals and billet ears was mounted. The stock handlebar mounts on the top triple were shaved, clip-on mounts were installed and the bars were replaced with a cut set of low-rise items to keep the riding position comfortable. New levers, a master cylinder and some switch gear was mounted along with some custom cables and Biltwell diamond grips to match the seat. The stock ignition was replaced with a hidden kill switch and an aluminum start switch was also recessed into the tank”. The Honda’s stock headers were trimmed back, some new exhaust tubing was welded up, and it was all sent to be ceramic coated. Next came the installation of some carbon fiber exhaust tips. An aftermarket radiator guard was then sourced, stripped and powder coated, along with the bronze wheels and various engine covers. Continental tires were used front and back to keep things nice and beefy. The frame was chopped, detabbed, the centre stand was removed, the kickstand shaved and some little touches were added here and there to clean up the stock unit. “The paint job went to Josh at La Fountain Custom Paint, who laid down a beautiful base of indigo with some antique white racing stripes. The tail-piece is adorned with the Vampire Squadron logo, in honor of the client’s father who served in the Airforce’s 44th Fighter Squadron. All of this was then clear coated with a little blue pearl that really rolls with the light”. As always, the Honda was sent to Chad Francis of Retrowrench to clean up the wiring and work his magic with the carbs. Now the bike rumbles at idle and screams on top, with a little touch of that Goldwing whine. Looks like Halbleib’s Goldwing itch is back. Best get ready for his next sortie.