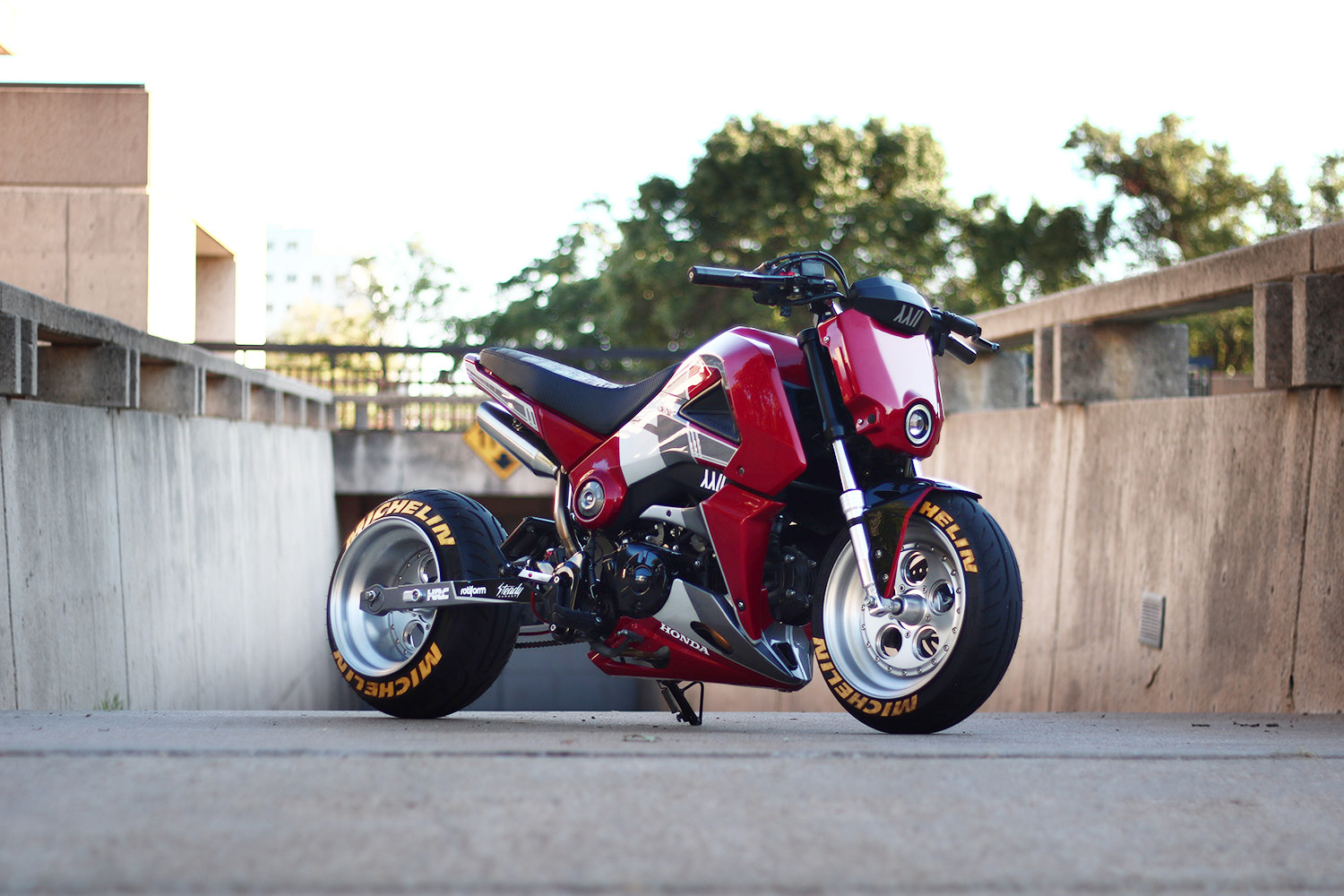 People who say ‘good things come in small packages’ are usually just people with less to offer, in whatever way that might be. But then there are people and moments who put absolute truth to the adage; David slaying Goliath, the Miracle on Ice and men like Jack Brabham and John Britten, building their own machines to take on the biggest manufacturers in the world. One man who has always made the most with the least is Alex Poole from Wichita, Kansas, who has spent the best part of a decade building some of the coolest Honda Ruckus customs to ever hit the streets. But having proven his worth in that scene, he needed a change and sticking to doing spectacular things with small packages, he’s built a Honda Grom with a Hulk Hogan attitude.

The Ruckus and Grom, both from the big H might seem like two very similar machines, but they are in fact worlds apart. The Ruckus is a cool thing, but it’s a scooter in every single way, whereas despite having an even smaller wheelbase, the Grom is absolutely a legitimate motorcycle! “I felt it was time I stepped up into something different. Soon after it became a thought, it became a reality. Once I acquired the Grom it felt great to feel that excitement of looking for parts and learning this new platform. Not long after researching and looking around at what was to offer, the gears started turning. I wanted this bike to look like no other Grom I had ever seen,” Alex smiles.

The first thing that was going to change were the wheels and Alex wanted to go above and beyond anything he’d seen on a Grom before. Based on the Rotiform DIA design, the wheels themselves are completely custom-made for purpose two-piece FLP wheels. These required that a pair of custom hubs be machined and luckily Alex had the connections thanks to his time in the Ruckus scene. They’re a truly wild bit of kit, with brushed barrels and metallic silver faces and to match are then wrapped up in that unmissable Michelin rubber.

So, just how big are they? Well, the front measures a stout 12x4in and the rear is an absolutely monstrous 12x8in wide. Clearly, this meant the stock swingarm would have to come in for some serious modifications and it starts with a one-inch widening of the stock metal. To get the stance that Alex was after a pair of Mojo swingarm extensions then lengthen the whole thing and poke that tyre out well past the tail of the bike. Time to sort the rear suspension and this look is all about being dumped to the ground, and this is achieved with a 4in lowering link and Fastace coilover.

Time to get controversial, “converting the stock right side rear brake to a left side sprocket brake,” Alex tells us. “A lot of riders would disagree with this but doing research and seeing that it is acceptable, I couldn’t turn back. I’d love to go into detail of how that was all done but it’s a novel in itself. Short version: I machined a custom rear sprocket brake caliper and added mounting brackets to the swingarm. Does it work? Yes. Do I rely directly on the rear brake? No. It was just another ambitious part of the build that had to be done.” Not so controversial, the beefy Mojo Customs Ruckus fork conversion kit with Feign V2 front forks.

Next on the list was the bodywork, and again Alex has excelled at not only transforming the look of the Grom but improving areas where the factory bike was let down. The Petex belly pan and HRP mid fairings do a great job of covering up the engine and giving the whole bike a true sport naked feel, rather than the almost scooter-like stock look. In the same way, the Petex headlight surround does a great job at transforming the front end of the bike and the projector headlight gives a truly 21st-century appearance. The seat, perfection, the Bride material a tip of the cap to the JDM scene and fans of a certain age will fall in love with the look.

Now Alex had another challenge on his hands, he didn’t like the stock black look, but he’d also been disappointed with paint jobs he’d paid good money for in the past. “I figured, why not give it a go? Keep in mind, this is June-August where every day was 90-105°. Basically, I had no clue about the design so I took some pinstripe tape and just started taping. Crazy enough, the design was done in 2-3 days. Before I know it, I have all my parts separated, hanging from a canopy in my backyard and I’m laying down layer after layer. The colours were not planned, I just picked each layer colour as I went.”

From top to bottom the finish is flawless and with the bike nearing completion, a bump to the factory 10bhp was the perfect way to finish it out. These little engines respond surprisingly well to tuning and a TB cam gets slotted in and the air is fed via a K&N filter with a cold air intake. A port and polish help with airspeed and gases can then escape out of the high rise single header with a custom dual tip muffler that looks trick finishing out under the seat. A DH Motoring ECU tune allows the package to take maximum advantage of the modifications and Alex was done. He might be a home builder, but he delivers a world-class result and how can you not love a little bike punching well above its weight.