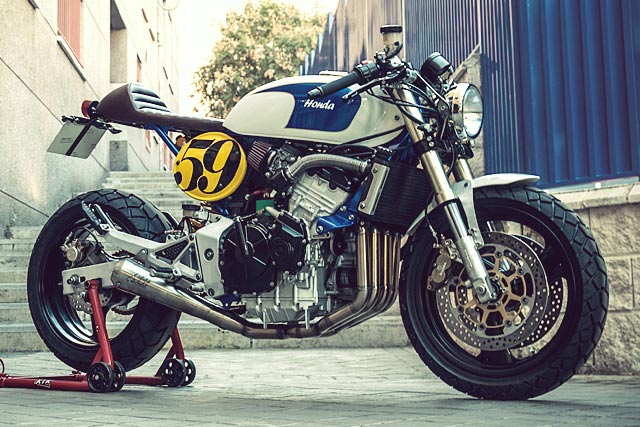 “Make me a Cafe Racer”. It’s undoubtedly the most fool-proof brief a bike builder can get. Jose Rosell from Spain’s XTR Pepo probably had the bike designed in his head before the sentence had left his customer’s mouth. But the next words to emerge would be akin to someone jamming a broom handle in your wheel at race speeds. “Also, I want to ride it on the beach,” the free-thinking owner added. And no, he wasn’t kidding. “It got serious with the tyres,” says Pepo. “The customer asked me to fit some Continental TKG 70s. When I asked why, he told me it was because he wanted to use the bike to go to the beach. As it was to be a cafe racer I questioned the choice, but he was quick to restate his original request. ‘As I said before, I want to ride the bike on the beach,’ he remarked. Okaaay then. With all the professionalism he could muster, Pepo set aside his doubts and pushed forward with the project. “I wanted to make my interpretation of the classic Honda Four. So naturally, I chose an authentic Honda CB500 Four fuel tank from the seventies as the starting point for the build, along with the Honda Hornet donor bike from 2001. I spotted it on a second-hand bike site. It was located in Barcelona, more than 650km away from me, but it was the best example I could find”. The key mods include the usual rear frame chop and a not-so-usual tank modification. “I cut the frame in the rear to allow me to mount one of my narrow XTR Italian leather seats. It’s essentially a completely new section. I also modified the base of the CB Four fuel tank to allow it to fit onto the Hornet’s squared backbone frame”. Next, the bike was completely disassembled and sand blasted back to a raw, fresh finish. The frame was painted, but Jose left the metal raw on the swingarm, engine, footrest supports and engine fittings. “Then the engine was completely torn down, refreshed, blueprinted and then remounted in the frame. The head’s intakes were ported, a Dynojet kit was added to the carbs and we fabricated a new 4-2-1 exhaust system”.

“We chose some Ducati upside-down forks for the bike. As you’d imagine, this required a fair amount of fabrication to install correctly. And while I was at it, the brakes were upgraded using Brembo calipers, NG rotors, a Honda CBR1000 master and Frentubo Kevlar brake lines”. “As always, mounting an old fuel tank on a modern frame can really test your patience. And there was the usual electronic problems modern bikes will give you from time to time; in this case it was getting the bike to start after we decided to eliminate the original key & barrel. But that was eventually solved”.

And you can tell that Jose’s more than a little pleased with the end result. “I think the look we achieved is like having a real Honda Four, but from the 21st Century. It’s just so small and compact”. Add the estimated 110 horse powers to the equation and we’d pay money to see its new owner let loose on that beach.