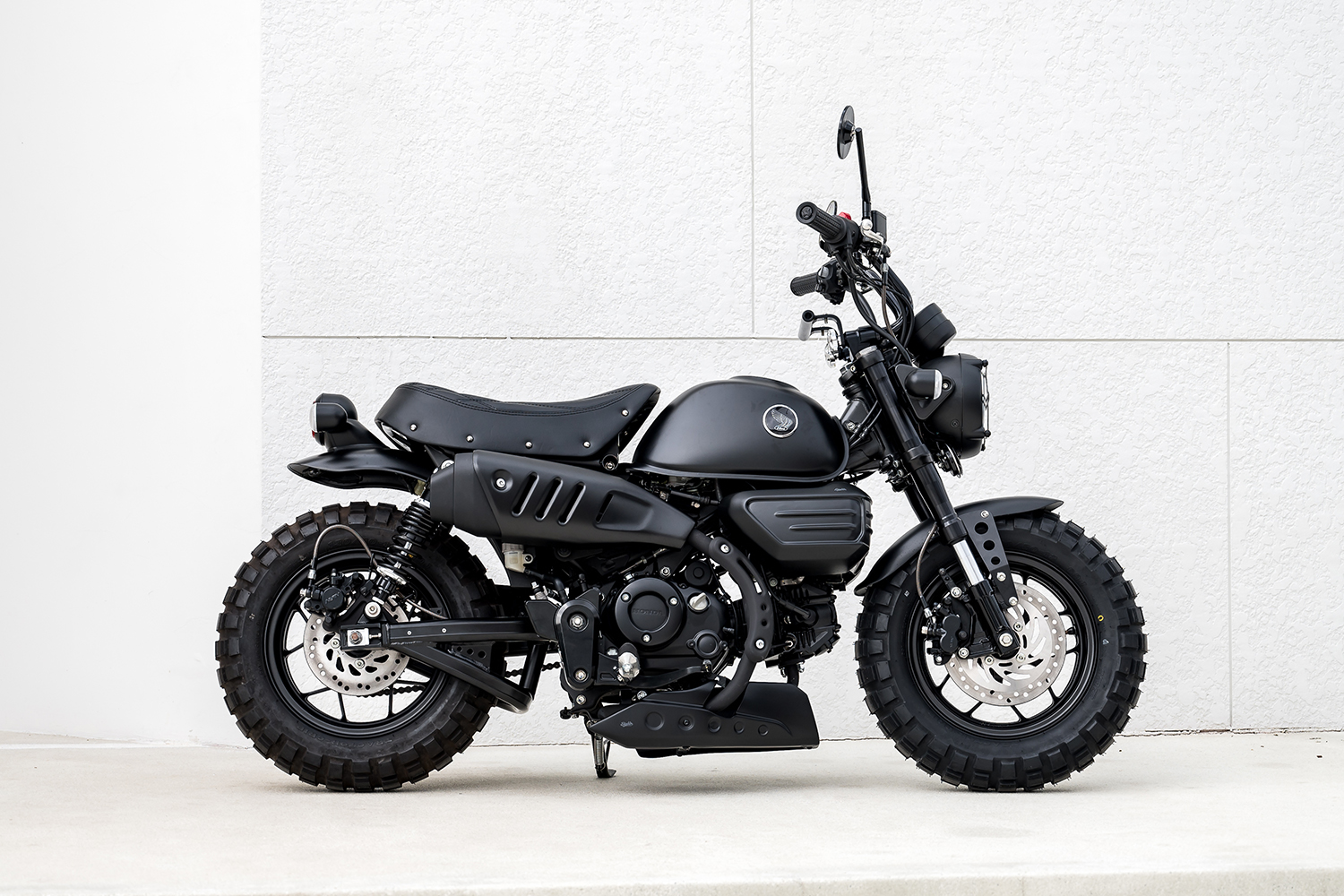 If you type Pit Bike into Google these days then you’ll probably be presented with a host of ads for some very cheap, substandard, small-sized dirt bikes. But their origins date back to just after the Second World War when racers used them as a form of transport to get around the paddock and back to the staging lanes. These often hand-built machines inspired the minibike boom of the ’60s and they’ve been a beloved part of the motorcycle world ever since. Growing up, Tanadit Sarawek known to the world as Eak, rode those little bikes to his heart’s content and started his journey to becoming the main man behind custom powerhouse K-Speed. So, when Honda released the new Monkey 125 he was instantly inspired to get creative and his latest mini bike build is this baby beast called ‘Kong Kid’.

Based on the Honda Grom, the new Monkey forms part of what Honda calls their miniMOTO line-up and they’ve proven to be incredibly popular. It was the release of the Monkey as a 2019 model that really piqued Eak’s interest and while to him they’re a fun “toy”, the minibike of 2022 has come a hell of a long way. Fuel-injected engines, IMU-based ABS, LED screens, these are a serious bit of kit. So, it made perfect sense that when the first examples landed in Thailand, Eak and his team got their hands on one and turned it into a sweet little cafe racer.

From there, his friends were keen to get in on the act and have a K-Speed kitted-out minibike for themselves, and as they say, the ball just kept on rolling. Now the company has built tons of the little things and their in-house brand ‘Diablo’ sports a catalogue worth of parts for owners of bikes like the Monkey and Dax to build their own. Having done the cafe racer, bobber, and scrambler styles with the miniMOTO range, this build was a chance to crank up the fun level and turn the toy-sized bike into something that looked like a supersized version of a kid’s Christmas present.

That fun and exaggerated look starts with the rubber and it’s all laid out on the side walls of the IRC tyres, ‘Tractor Grip’ measuring 130 width at each end. To give that over the top appearance even more of an impact, Eak decided to slam the bike to the floor, and the factory front forks have been internally lowered by a full 8cm. The USD units are 31mm, which is beefy for the size of the machine, and the triple trees have been refinished and the tops are given a chrome appearance to offset all of that black.

The rear shocks come from the Diablo catalogue, measure 290mm, and offer 20 clicks of adjustment. Like so many of the parts on the bike, the full suspension setup for the front and back can be bought straight from the company website and includes the short side stand to suit. The quality Nissin brakes have been blacked out at each end and treated to a set of braided lines. Then to complete the handling package, there is that uber cool WSBK-inspired swingarm, with its extra bracing, beautiful welds, and chromed out axle blocks.

There is something that just makes you smile about a little bike getting such a big makeover and the sense of fun continues in the looks department with a Diablo belly pan that visually drops the bike further to the ground and adds some muscle to the engine. The Diablo side covers add a little texture to what was originally a very plain surface and the high mount front fender is swapped for a tyre hugger with custom mounts. The rear fender is significantly shorter than the factory and this was done once again to show off those tyres.

The fuel tank is one of the few stock parts that remain in transforming the Monkey’s appearance, but it lets any bike fan know exactly what they’re looking at. Then like so many K-Speed builds it was out with their signature satin black paint and almost nothing on the Honda is spared, with even the rear light surrounds and indicator housings being taken back to bare and sprayed up. The front headlight coped the same treatment and is then covered in a Diablo grille, and that Diamond stitched leather seat is straight from the company catalogue and ready to bolt on.

The high-rise bars are a complete kit from Diablo and mount straight to the stock triple clamps, giving that distinct K-Speed look, and are designed to accept a host of their other parts. These include the block-style grips and the CNC machined mirrors that come in a range of shapes and are all anodised black.

Finally, to finish out the build a bunch of the engine parts and the exhaust shielding were hit with heatproof paint and Eak had himself the perfect toy. If there is enough demand the custom swingarm will be added to the Diablo catalgoue too, and ‘Kong Kid’ is proving to be like any great Ape, no matter the size you can’t help but smile and be scared all at the same time!