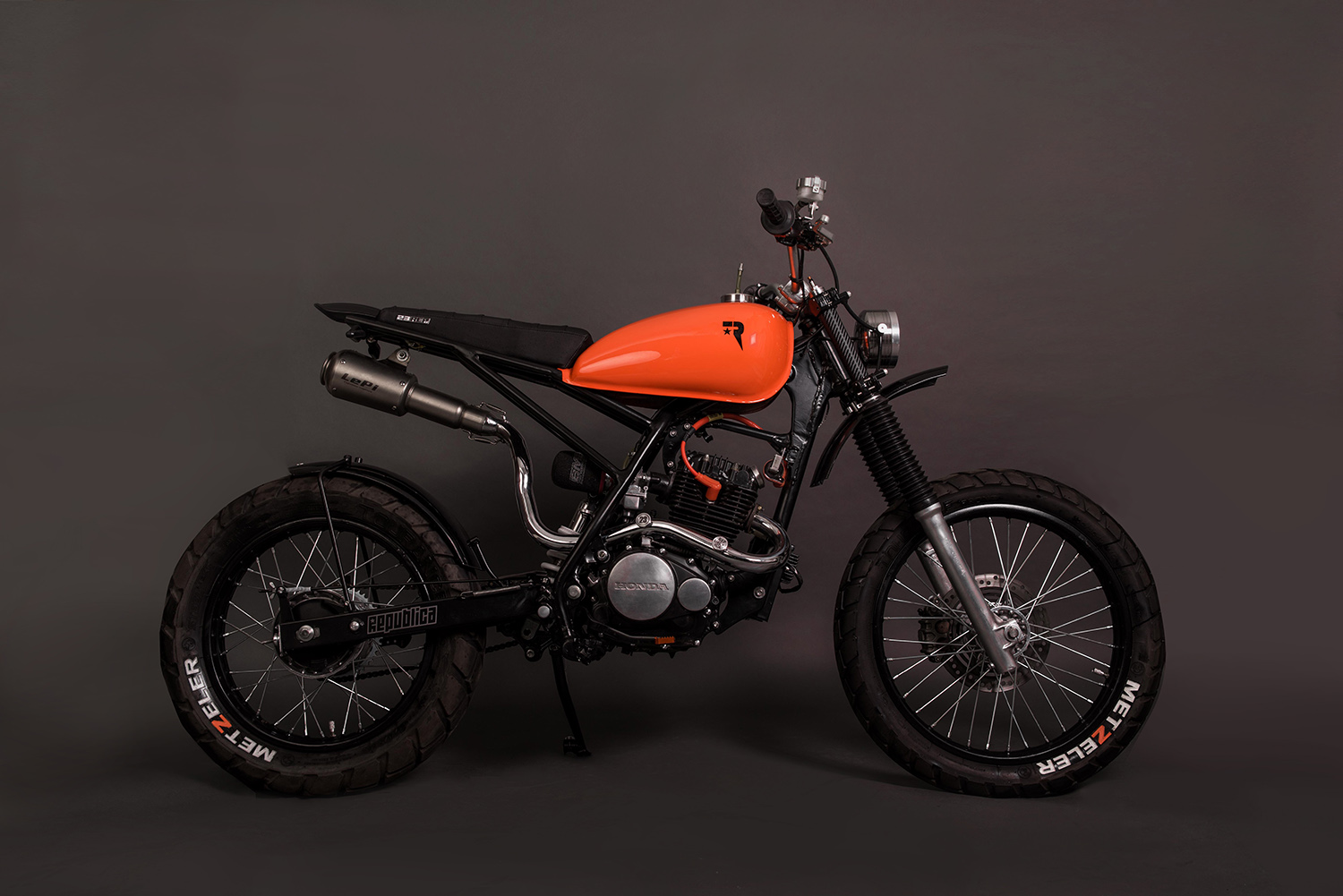 The insane power figures of modern superbikes has resulted in a horsepower arms race that has filtered into every category of motorcycle. But the truth is, you really don’t need a bunch of power to have a whole lot of fun; add low weight and it only gets better. So in many nations where the HP obsession doesn’t run so deep, manufacturers are able to sell bikes that fit the cheap and cheerful category. One such bike is the Honda NX150, a machine we missed out on in much of the world but is a staple in places like Argentina. There, a special workshop, Republica Motocicletas has taken on the budget NX and built a stunning custom dirt bike on a budget you won’t believe.

Based in Córdoba, in northern Argentina, Republica is made up of two lifelong friends, Franco Losón and Carlos Sartor who have built more than 45 custom bikes of every style and make that you can imagine. But the way they work is different to just about any workshop we’ve ever come across. They choose the projects that they take on very carefully and the clients that they even consider. They design the bike, they give no estimate on time as to when the bike will be finished and they also request that only the best parts are used for the build.

From there, they get to work to complete your bike and the best news of all? They don’t charge a single cent for their work and labour! It doesn’t get much better than that, especially when you’re getting all of that experience, knowledge and know-how for free. So for the love of custom building, on with the show, “the motorcycle in question is a 1994 Honda NX Named “Fofis” in honour of a colleague of ours from the workshop. We tried to redesign a unique motorcycle in every detail and give it a modern style suitable for off-road.”

To begin the build all of the ugly plastics were pulled off, the huge seat was thrown aside and the square fuel tank moved to a far corner of the shop. With a bare frame now in their hands, the lads could start to envision the sort of ultra-clean and minimalist design that they had in mind. To achieve this, they attacked the rear with a grinder and cut the metal back to the centre post. From here they could build their own rear subframe, with the lower rail beginning halfway up the bike, rather than the ugly look of the factory tube that starts all the way down near the swingarm pivot.

With the frame sprayed black, a seat base was fabricated with a neat, slim profile, that has then been covered in black in a very neat motocross style. Knowing there was some off-road work in the bike’s future, a small high fender was mounted up. Then the boys got to work shaping a second rear fender that would follow the lines of the rear tyre and is mounted on a custom set of struts that bolt to the swingarm. The front fender hangs off custom mounts and the high style is finished in black just like the rear.

With the plastic fuel tank never going to be invited back from the naughty corner, the lads had to find a replacement that would suit the bike’s style. The solution was found in the form of a 2011 Suzuki GN metal tank that was first panel beaten to perfection and then adapted to fit the backbone of the Honda. Then it was time to hit it all with paint and the black and bright orange colour scheme was chosen for the full Motocross effect; even the company logo was redesigned to match and can be seen across the bike in its striking new forms.

Then there are the cool little details, “more than 25 turned parts in aluminum and stainless steel.” These include the very functional filler cap on the new tank and stunning custom headlight surround attached with its own unique struts. To a host of decorative pieces that feature across the fenders, engine, and seat. They’re not over the top, just enough to give the NX its own unique style. Part of which also meant giving the bike the MX stance, new suspension fitted and “we also manufactured custom rims in chrome and black tones in 17” rear and 19” front.”

The little engine doesn’t miss out either, with the big plastic airbox and electrics tray gone and replaced by a pod filter and a custom battery box, with the regulator out in the clear air. But the big change to the single-cylinder 4-valve comes from the full new stainless exhaust that snakes its way rearward before barking out of a GP-style muffler mounted under the seat. It all adds up to give the little NX a whole lot of attitude to go with its transformation from a mini dual sport into a full-on off-road machine. It just goes to show what happens when you have a little faith in a Republica Motocicletas design and benefit from all their talent and paying not a single cent for it. I believe.