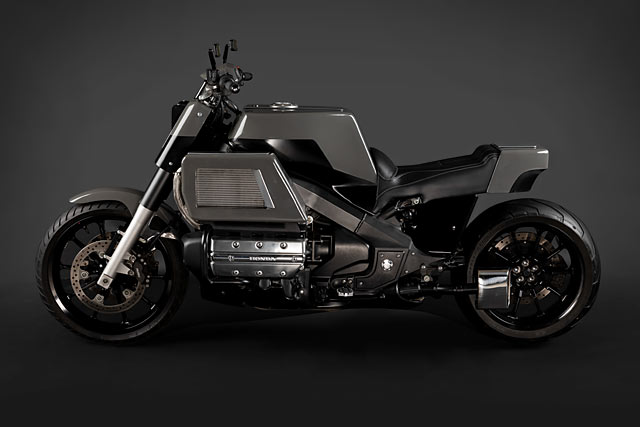 You know it for its Bourbon, Derby and Fried Chicken, but the Bluegrass State of Kentucky celebrated for its fertile pastures, is a place where you get back what you put in. That’s meant Scott Halbleib has been successful in the corporate world, been a bartender and grafted as a carpenter; but where he truly excels is building custom motorcycles. The owner of H Garage is also no stranger to the ups and downs of life but infused with his father’s love and hard work he finds a way to make the best of any situation. That’s truly embodied in his latest build, a once big and boring 2014 Honda Valkyrie that he’s expertly sculpted into a sophisticated 21st century street fighter. 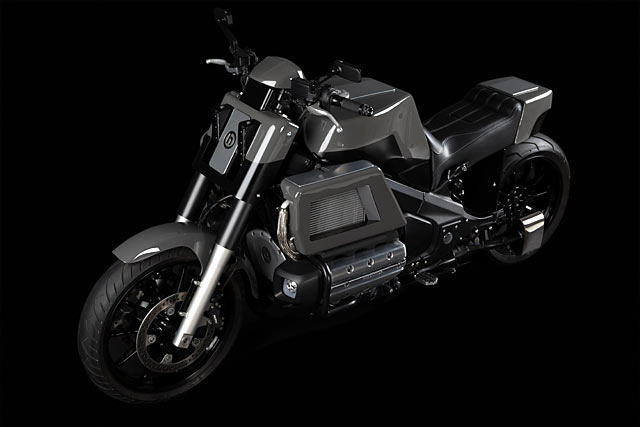 With gasoline in his veins and a true biker at heart, Scott is also the organiser of the Kentucky Kick Down Motorcycle Festival, a 3 day vintage bike extravaganza. But after it’s over comes the predictable comedown, “It’s the post Kickdown slow down at the shop. So much time is spent organising and promoting the show from mid summer on, the shop slows a bit. So it’s time to find some Winter clients and get back to work,” Scott tell us. It was around this time he received a cold call, with a guy wanting his 2014 Valk customised. The first reaction was to find a way to let him down nicely… until the creative wheels started turning! 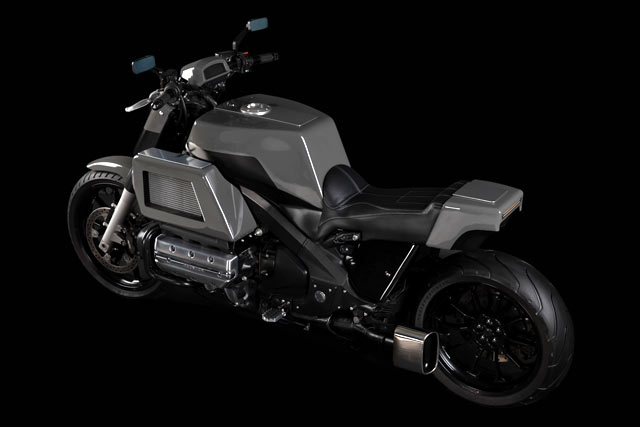 “So tables were turned and it was time for me to do some convincing. I left him a text message to ponder, telling him that I thought this could be a very interesting project, and hoped that he’d sleep on it and reconsider pulling the plug. The next morning there was a knock on the garage door, and there he was sitting on the behemoth. A quick nod was all it took to confirm and we set off on a lengthy project,” Scott smiles. Putting his well honed graphic design skills to the test, he came up with a number of sketches, a loose design that the owner agreed on, “Think massive street fighter that you can ride to the Opera with your fancy clothes on.” 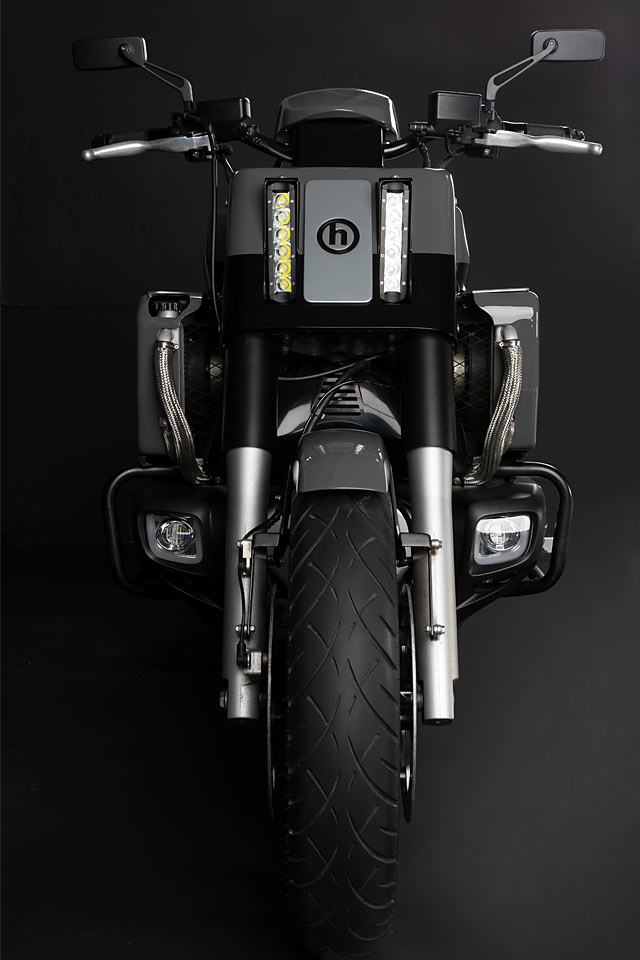 Now it was time to get the big girls clothes off and with 752lbs pounds of flesh from the factory there is no shortage of them to hit the floor. The bare bones would remain stock, the frame, wheels and suspension all being left as they were. The fuel tank was the first area tackled with the factory cell itself remaining in place, but to achieve the look he was after Scott has fabricated a shell that is then welded in place. But for the design to literally begin to take shape he reached for the modelling clay that was then covered in a paper template. Two attempts later and the design was transferred onto steel through the laborious task of shrinking, hammering and stretching.

[superquote]“Now it was time to get the big girls clothes off and with 752lbs pounds of flesh from the factory there is no shortage of them to hit the floor.”[/superquote]

A flush mounted filler cap has been installed as well as commercial grade fuel hose to connect to the original inlet. A pair of side panels were added to give a flush connection to the seat and then the whole thing was carefully welded in place. Scott could breathe a sigh of relief, but only for a moment as a bike this big has plenty more body work to go. Next up was to deal with covering the side mounted factory radiators and cardboard was used to get the basic shape. “A good bit of time was spent coming up with something that fit tighter to the radiators, still allowed plumbing to attach and access to the filler cap as well as the new brake fluid reservoir,” Scott explains. 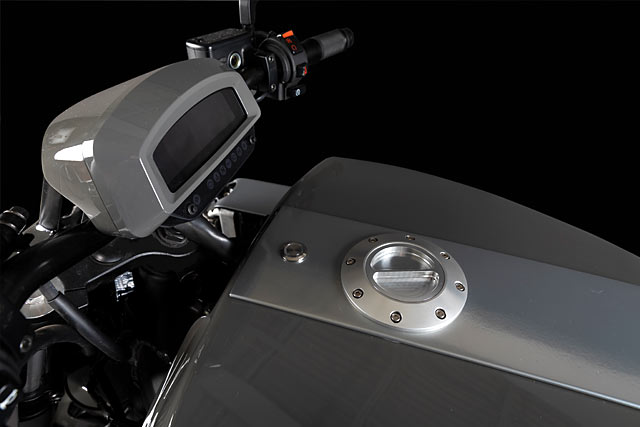 The tail section was next on the menu with the H Garage theme of ending over the rear axle continued on the Valkyrie build. The subframe has been shortened and re-braced and hosts a Speed Cell battery and a Power Commander for the engine. While the tailpiece keeps the body styling perfect from front to rear and utilises twin LED tail lights with integrated turn signals for an ultra clean finish; with front turn signals in the new fog-lights. Finally the seat foam was shaped and sanded before the luxurious saddle was brilliantly upholstered by Mike Brewer. 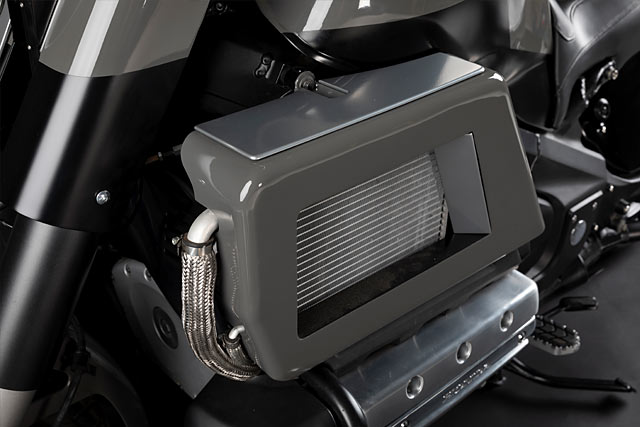 Now the front end needed to be finished off but the initial plan of a simple face plate was scrapped with the build now befitting something much more regal. It was decided to continue the theme of twin LEDs from the back and “there were a couple of attempts due to clearance issues of trying to tuck the LEDs in. The final design was to have them split the surface halfway up and add the ‘eyelids’” says Scott. While the new front fender was found in the shop, stretched, modified and new mounts added for the perfect look before the two-tone gloss grey and satin black was applied across the entire bike. 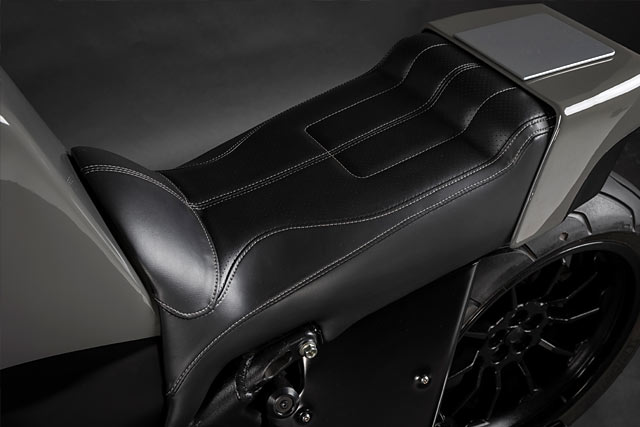 Low rise Biltwell bars were installed, as well as new grips, mirrors, and footpegs to give the rider a plush feel. While a push button ignition switch was mounted in the tank, and aluminium panels were CNC’d, edges rounded and ultimately powder coated to provide a perfect contrast and break up the large surface areas. Throughout the project Scott had tried desperately to find the right mufflers to tame the sound of the thumping 1832cc flat six engine. But with nothing working out, Borla dual inlet tips were ordered, capped, hole-sawed, and new tubing was welded up and angled to keep the tips parallel with the bike. 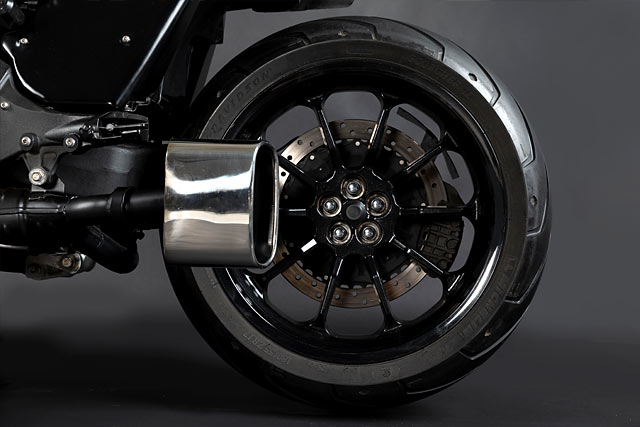 To the surprise of all the sound was spot on, with most of the silencing taking place inside the catalytic converter. With the added bonus Scott had always been chasing of finally showing off the beautiful single-sided swingarm and that enormous 180 section rear tyre. The finished product is a sight to behold, a stripped down street fighter with an engine that’ll make many a modern car engine blush on the issue of size. But despite the initial hesitation of taking on such a task and the incredible work needed to complete it, Mr Halbleib remains as positive as ever. When you were born to be a bike builder and taught the lessons to always find a way, it’s just part of another day in Kentucky. Now, pass the Bourbon!