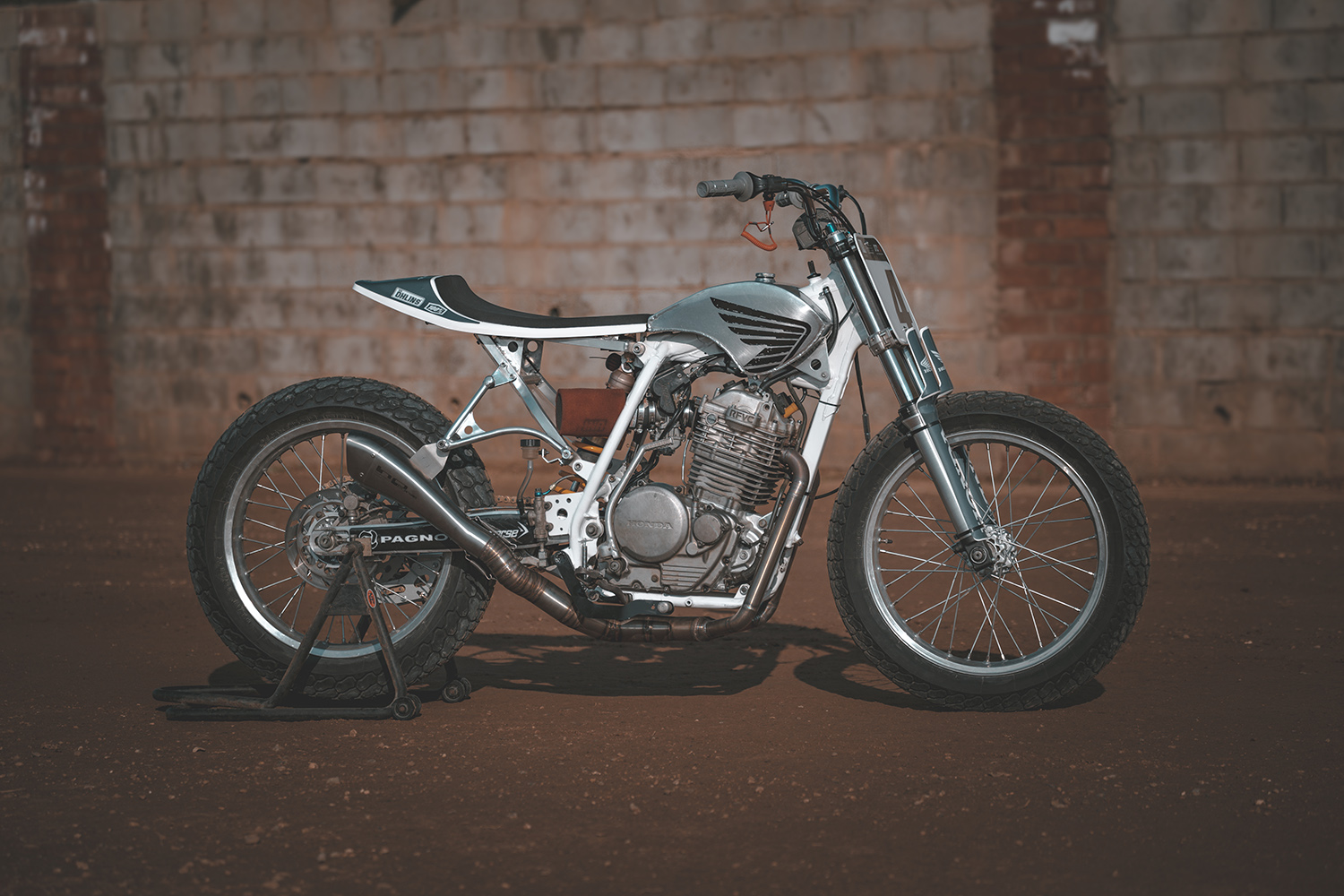 The noise is deafening as engines scream through near open pipes, the harsh smell overwhelming and everywhere you look is chaos. And yet with all that going on, your body is an almost nauseating mix of adrenalin and nerves; then the flag drops, the lights go out and the mayhem really begins! The casual observer must wonder why you’d subject yourself to it all, the racer simply can’t wait to do it all again. Spain’s Carlos ‘Xarly’ Guzman is one man who has been bitten hard by the bug and builds flat track bikes for the like-minded under the Vintage Addiction Crew banner in Barcelona. But this is his personal steed, a Honda XR600 that perfectly displays his talents, on and off the track.

Flat Track is one of the most accessible forms of two-wheeled motorsport on the planet. And while it has always been a big deal in the United States, its popularity has taken off around the world in recent years. The tracks can be big or small, the riders world champs or first-timers, it really doesn’t matter the bike and you can do it all on a very budget-friendly chunk of change. So, being an experienced bike builder, Xarly decided it was time to build himself a machine that was geared towards improving his own riding skills.

A bike too slow will never really give you the opportunity to find the edge and then learn to stay pressed up hard against it. A big dollar machine with endless power will probably intimidate you from ever really pushing hard, so the balance had to be somewhere in the middle. “The bike was built with the idea of starting to train as a rider in dirt track mode, for this we wanted to make it as light as possible, the longer swingarm gives us great stability in fast curves, both entering and leaving,” Xarly explains.

Starting with an XR600 provides a great base, but it needs lots of work and just the bare frame was the building block for this race machine. Bolted to the back of the frame is an all-new rear end that is designed to lift the rider up and allow them to transfer their weight in every direction without any hindrance. Over the top of the new alloy subframe goes the ever-popular flat track style tail unit with just the most minimal of padding. The tank on an XR is not only too big but prevents you from climbing further forward when trying to keep the front wheel pressed into the dirt.

So out with more sheets of alloy and a new slim line tank was fab’d up, that is barely higher than the seat, with the majority of the fuel being held in the sides. A fuel filler has been welded in place, the tank left raw and a set of big black Honda graphics laid down over the top. The rest of the bodywork is all business, with the new subframe having purpose built mounts to hold removable number boards. With one also bolted to the front showing off Xarly’s number 4 and a set of fork protectors keeping his stanchions in good order.

These, of course, have not been left as they came from the factory, with the long skinny Honda forks never going to be up to the job. Instead the infinitely customisable front end of a Yamaha R6 has been grafted in. The rear is much more left field but works like a charm, with a 30mm longer swingarm from a 2002 Gas Gas adapted to fit and it also brings with it a fully adjustable Ohlins rear shock. Rolling stock is exactly what you’d expect, lightweight rims measuring 19-inchs, laced to the hubs with stainless spokes and then wrapped up in flat track rubber.

Now with the rolling chassis complete, Xarly could get stuck into the engine and it all starts with a 1993 Honda XR600R short block. The bottom end turns on new bearings that support a complete ProX crankshaft assembly and swings a high compression Wiseco piston up the bore. The top end doesn’t miss out either, with the worked over head now running a HotCams bumpstick and supporting components. To feed the fire, success has been found with a Keihin carb from a 2010 CRF450.

Xarly tells us it was the carb that really made the new engine sing and topped it off with a Uni filter to cut down on dust ingestion. The exhaust has had a number of incarnations with the final choice being a Craft system that spits out of a SuperTrapp muffler. With a new set of bars, grips and a Renthal pad thrown up front, the bike was complete and race time was here.

The bike runs in the Catalan DTC Championship and has recently had a shake down for the French Vintage Sprint Champs. But most importantly Xarly’s just thrilled with how the bike runs, with all the changes allowing him to ride on the ragged edge and have an absolute blast doing it.