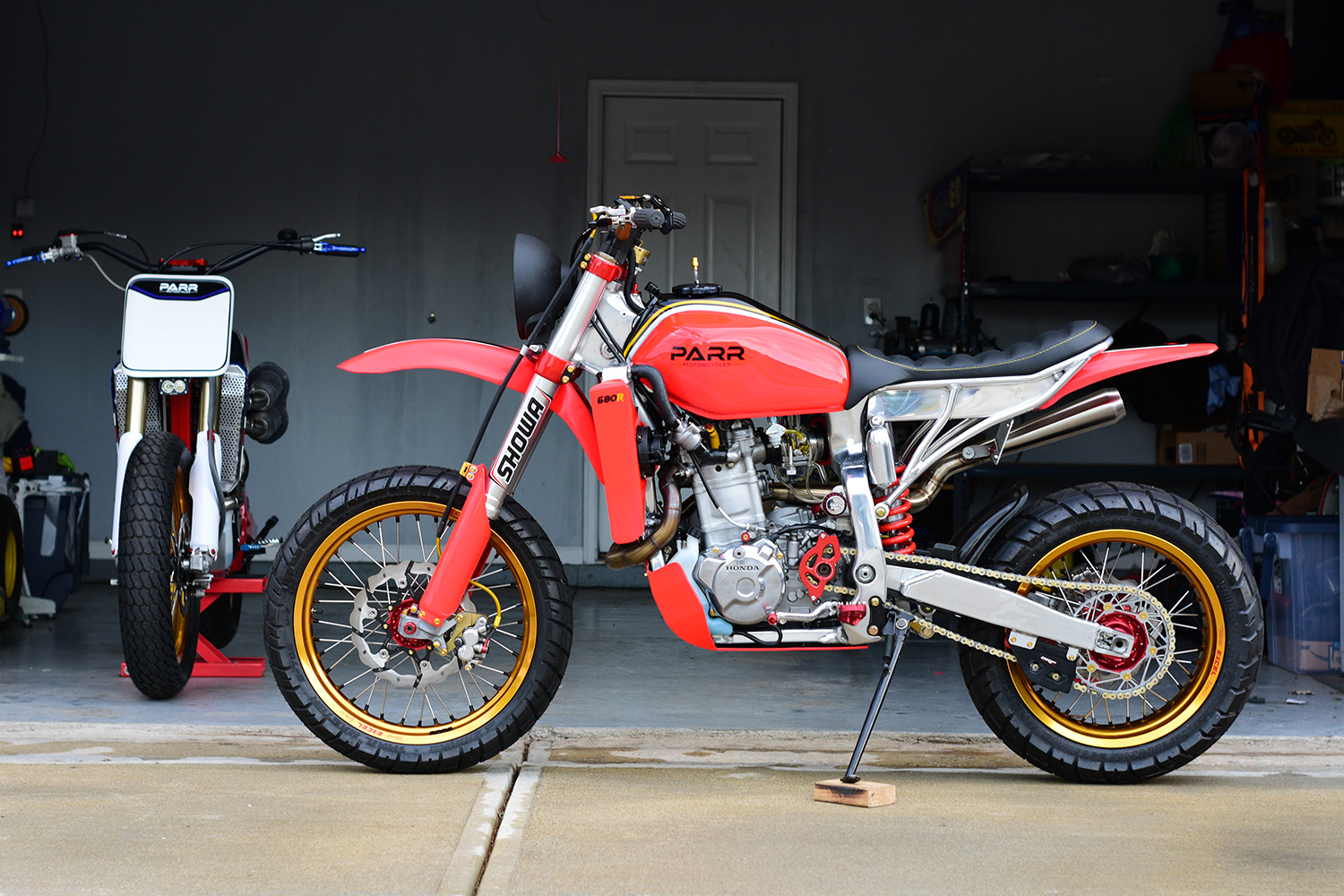 Over recent years we’ve been on a journey with Spencer Parr that has seen him show off his first custom bike which was an absolute ten out of ten, and then go on to better it each and every time. The arrival of a new Parr Motorcycles build is a time for excitement around here and as a two-time entrant in the Pipeburn Top Ten Bikes of the Year, it’s clear the entire scene loves his work.

When it comes to Street Scramblers, Spencer has a big claim to the King’s crown, and having gone on the tracker build route for a change and winning the RSD Corona Virus Build Off, it was time to get back to his roots. This would be a street scrambler of his own, one to keep, and something he could work on in his spare time. Then came news of another RSD competition and the sprint to build a Honda XR650R Scrambler for second-time success, was on in earnest.

Spencer’s story is as rewarding as a ride on any of his bikes, having landed his dream job as a police officer, he was cruelly struck down with ocular cancer. But rather than let his hopes be dashed, he turned to a new profession and has made building bikes in the back of his garage a raging success. “Flashback nine months ago when this all started. I was working on a Ducati Scrambler and Suzuki DRZ at the time but wanted another project for me. A project that would take years to build, since I would build it up slowly into exactly what I want in a bike for myself,” Spencer explains. A few months into the process however and the RSD Dream Build Off was announced.

He could have entered the Duc or the DRZ, but Spencer decided to go for broke and accelerate this XRR build and enter to see if he could make it two RSD competitions, for two wins. The build commenced with an XR650R frame purchased off eBay for just $200. With his laptop still open, a host of parts were found and ordered that would be needed for the bike in the future. Then with a swingarm found, it and the frame were blasted, sanded, and then hours upon hours spent polishing them to a mirror finish. With a paint booth set up in his garage, he Cerakoted them both in clear to lock in the shine, then they were hung in the laundry to dry.

“I needed to get the bike rolling so Dubya hooked me up with some gold and red wheels with the front being a 19” and 17” for the back. They’re wrapped in Shinko 705s, which is my go-to scrambler tire.” For the suspension setup, Spencer chose a meaty set of CRF Showa forks that have been rebuilt to suit the build, while the rear end utilises a 650R shock that has been given a complete update. The brake package is all lightweight and the gold braided line matches the big bars that sit atop a serious set of risers. These are kitted out with just the basics for an ultra-clean look and a steering stabiliser joins the party.

Then for Spencer’s favourite piece, “I sketched out a design really quick, then got to work bending and rolling tubing shaping the subframe into what you see here. Soon I made an electronics box for it, and mounts for the CRF rear fender I planned on using.”

Tank choice is make or break, but he always had one in mind, and not only does the Honda XL500S item look the business, it fits perfectly over the backbone. “The seat has to flow with the tank and since the tank sat lower than the subframe, the seat had to bridge that gap. So, I made a template, cut it out of aluminum, and shaped it around the tank in one piece. Soon it was wrapped by Dane Utech out of Chicago.”

The engine looks good enough to eat off, but it’s what’s inside that counts and that’s a 680cc big bore and 11:1 compression. Fueling the fire is a big Lectron carb and a custom 2-into-1 exhaust is paired with a Cone Engineering muffler for added style points. The twin radiators are protected by Devol guards, and the slick side covers also double as mounts for the twin KTM fans to keep the big single cool. While on the underside of the engine an eBay special skid plate was modified and helps to enclose this most impressive monster motor!

Paint time, “All the metal pieces in red had to match the red XR400 and CRF fenders on this bike. My painter took on the challenge and nailed it. He was unable to get a reading on the fenders since they had too much fluorescent in them, so he created the red himself and it turned out perfect. I wanted a stripe to go right down the middle of the bike (even underneath), so a black stripe with silver and gold accents was painted to compliment the colours of the bike. For the fenders, aluminum pieces were made to bolt onto them and bring colour to the plastic fenders.”

The electronics complete the impressive package and Spencer runs two separate circuits. “The bike’s ignition runs off the AC current from the high output stator, while the lights and fans operate off a floating DC current from the 8-cell lithium battery located under the seat.” Serving as the dash a Garmin Zumo XT GPS adds a little Dakar flair, and also gives the rider the vital speed information.

Finally, a big front headlight provides the glow, and a combination of Motogadget and LED pieces act as turn signals to make it all street legal. In the end, Spencer missed the competition deadline, but he did make it to Motoblot Chicago.

The XRR is simply stunning and closes another chapter in the Parr Motorcycles journey as Spencer is about to move out of the home garage and into a full shop of his own, Bravo!