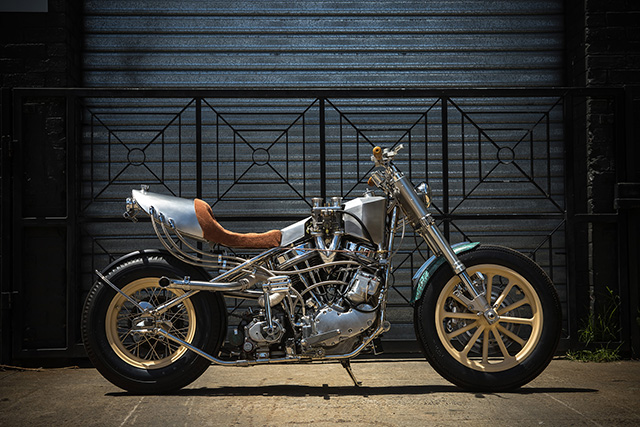 The old saying ‘Think globally, act locally’ often has us in the custom motorcycle scene looking around the globe for inspiration for our own bikes. But this week I’ve learnt about a builder much closer to home, another bike nut who calls rural Australia home. Mark Lloyd Riddell has plied his trade around the world and now settled in Albury, combines his incredible skill base to produce the most amazing of machines. MLR Custom Coachbuilder’s bring us their latest work, a Hot Rod Harley called the Larry bike, it’s a craftsmanship connoisseur’s wet dream! 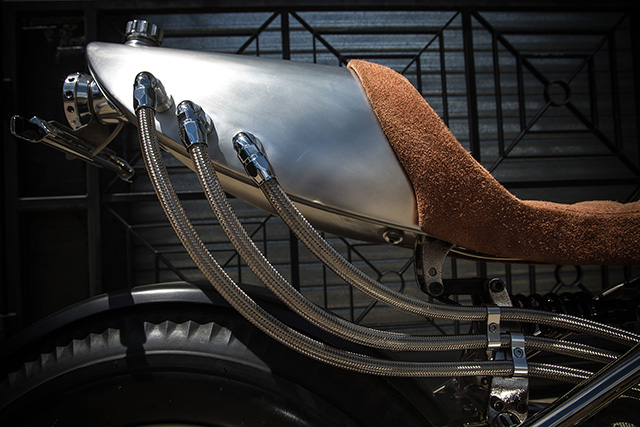 Originally from Edinburgh, Mark started his coachbuilding apprenticeship in 1984 and has had a variety of different jobs since. From an art studio in Leith, making moulds and props. To London working for an interior designer, fabricating bespoke lamps and small pieces of metal furniture. Then in Australia spending several years in a custom Harley shop and working in fabrication; doing sheet metalwork, building motor-homes and vintage vehicle restoration. 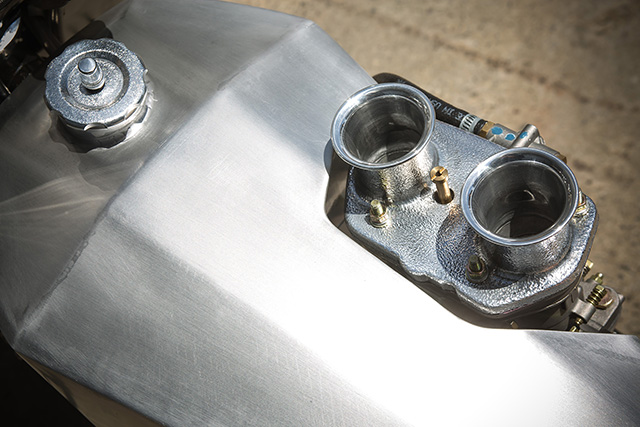 He is also an artist and sculptor, and I’m starting to wonder what I’ve done with my life as I read through his resume. But most of all he builds things with his hands and lets the craftsmanship do the talking, which is exactly why the client for this build got in touch! “This bike was built for a customer, there was no basic design brief, I was basically given free rein to build a unique custom V-Twin. Everything was run past the customer (Larry) first, he had seen my previous work and was quite confident I could come up with something suitably different,” Mark tells us. 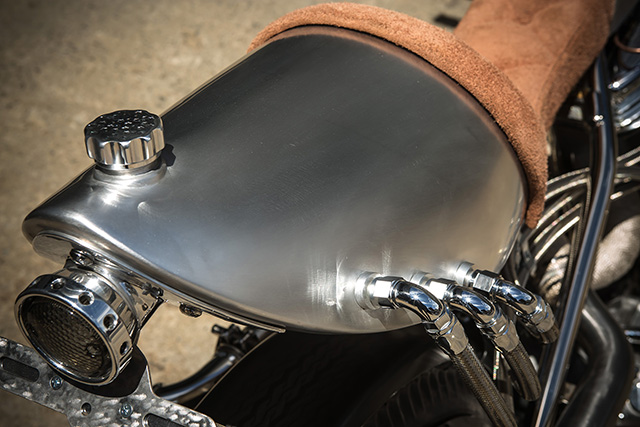 The entire motorcycle is a rolling testament to the man’s skills, you know its a custom Harley, but what exactly is it I hear you say! Initially Mark was going to build the frame from scratch, but while looking around he came across a ’53 Pan unit that would be a perfect starting point. From here he had the canvas for his work to commence, but unlike most builders Mark had another specific element that would then be combined with the frame to merge as one. “a V-Twin Manufacturing twin spark Shovel/Pan head engine.” 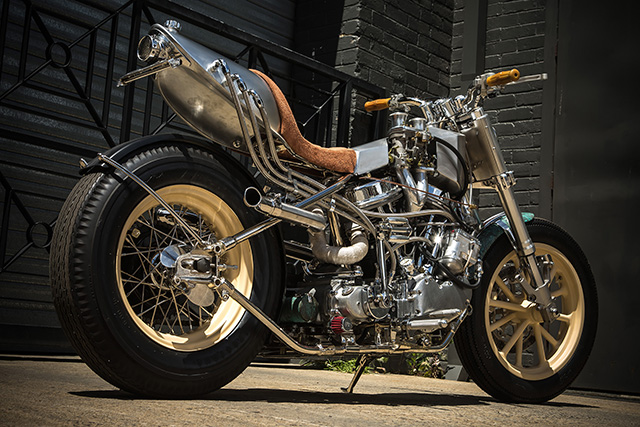 The engine is an incredible piece of operational sculpture on its own, the basis is a beaut but Mark has taken it beyond the next level. Old school charm, strong spark and the hot rod look all come with the big magneto that hangs off the right side. But even this piece is overshadowed by the stonking Weber 40 IDF carb feeding fuel to the flame. To get it to fit Mark shows off his tremendous skill, taking a piece of a 4×4 bullbar and fashioning it into a stunning inlet manifold; huge fuel lines and velocity stacks facing skyward, it’s a serious piece of kit. 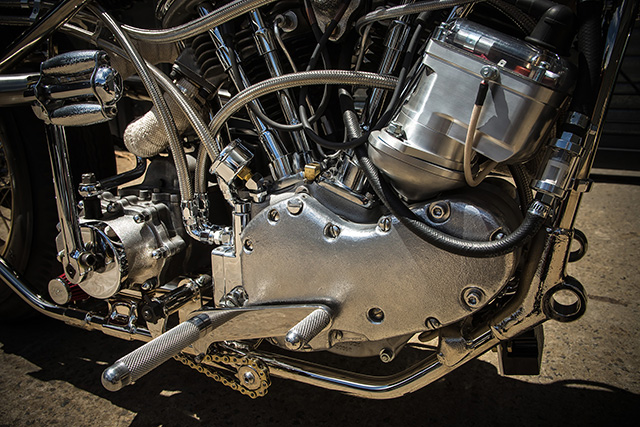 The engine sits right at home in the bling’d out seventy year old frame and slotting in behind is a Harley four speed cog swapper. Inside the primary that connects the two is a PRIMO Rivera clutch and along with the big pedal kickstarter this is not a combination for the timid amongst us. Now able to assess how much room he had to work with, Mark designed and bent up the brilliant twin pipe exhaust, with wrap and custom heat shielding in just the right places. Running above the system on the right side is a collection of braided hose, giving a big hint as to where the oil lives. 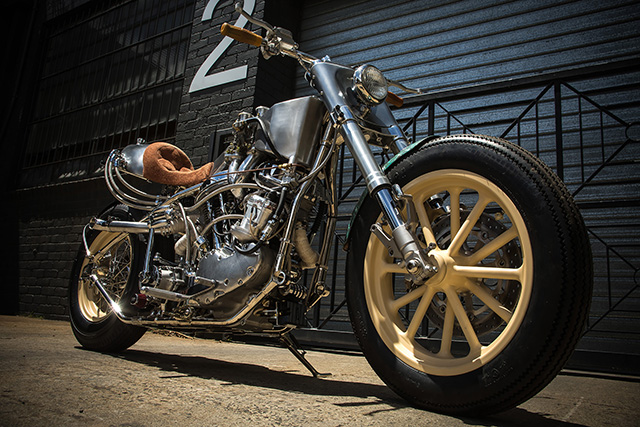 Here we can begin to appreciate the sheer genius of MLR, with the rear cowl section not only a visual feast for anyone who appreciates perfect metal work, but also acting as a practical oil tank, meaning it’s the perfect balance of form and function. Along with the hand shaped seat base and its distinctive covering, the entire rear articulates from the main rigid frame via a sprung support mechanism. And for lovers of hand beaten metal magic, the gas tank is another feast for the senses; a coffin style with a perfect recess for the big Weber. 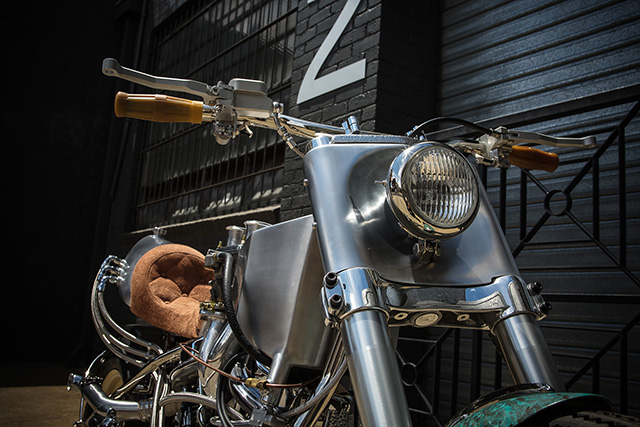 At the front of the bike is a classic piece of automotive styling, a wheel that was sourced from the USA. But it takes skills that can’t simply be ordered online to make it work with a modern Suzuki Hayabusa front end. At the rear is another left field choice, sticking with that ole hot rod philosophy, Mark miraculously makes a VW Beetle rim work with a Harley Star hub and wraps both ends in Firestone rubber. Before returning to the hammer and bag to make a flawless front shroud to help blend the mix of old and new. 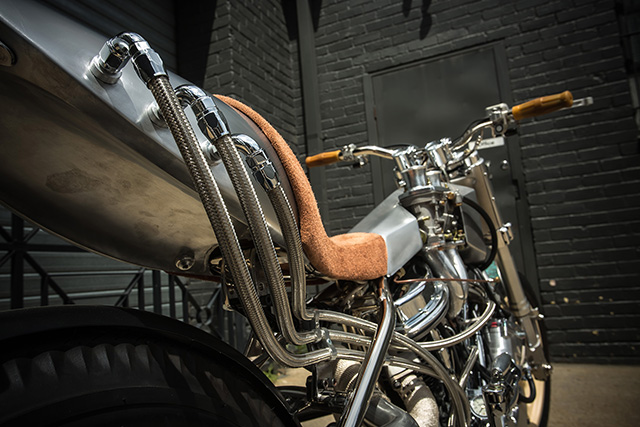 Up on the bars the bikes operation isn’t left to chance with high quality parts from Exile and Tolle Engineering to complete the task. Even the custom mid-controls have an added feature to enjoy, with a chain and sprocket operation on the right side. There is simply too many other details to mention but what sits before you is the creation of a builder at the top of the game. Some will find it too overwhelming and that’s the point, this bike is built just for Larry. But what MLR proves unequivocally is this, if you can dream it, he can build it! 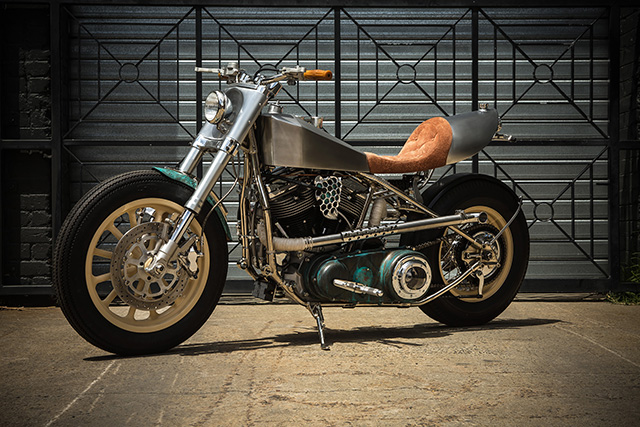 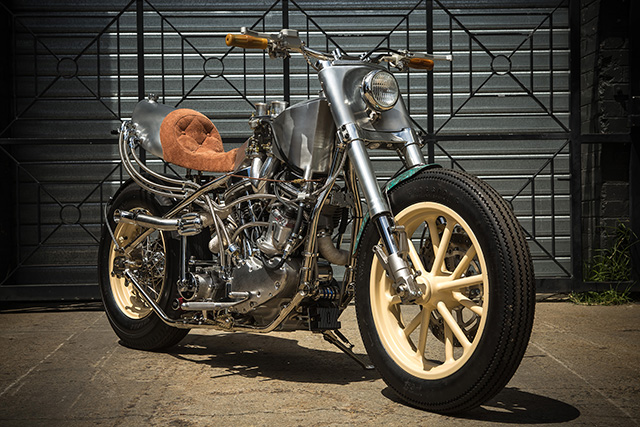 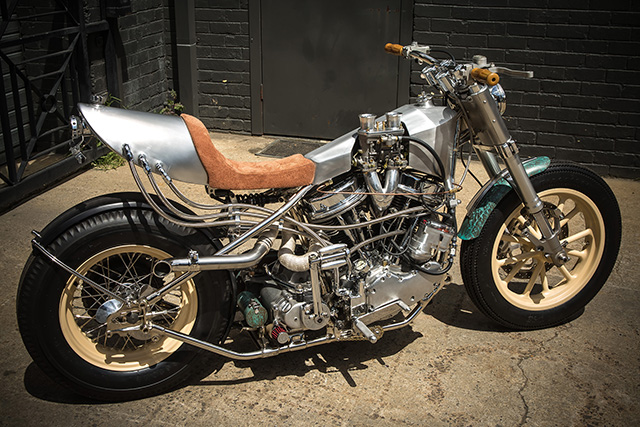 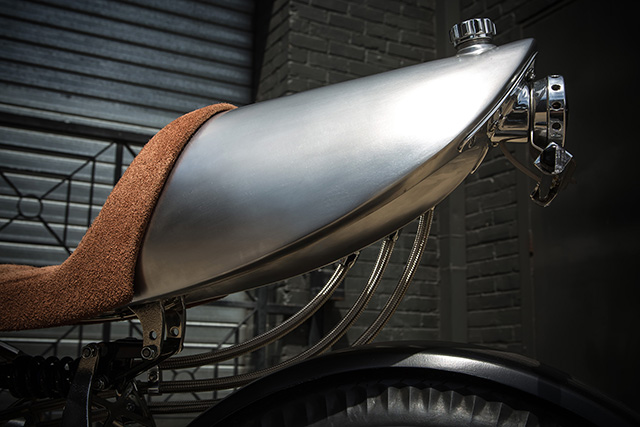 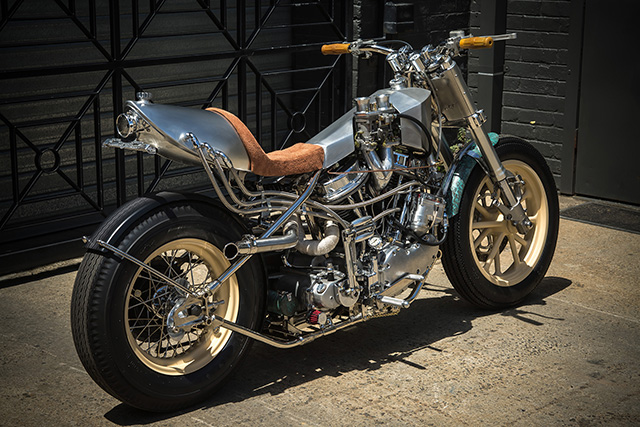 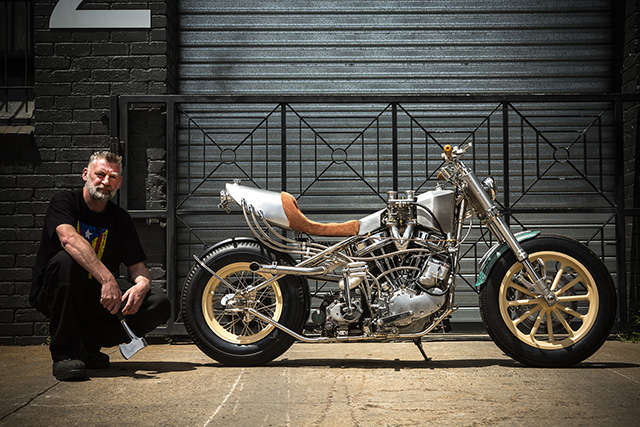