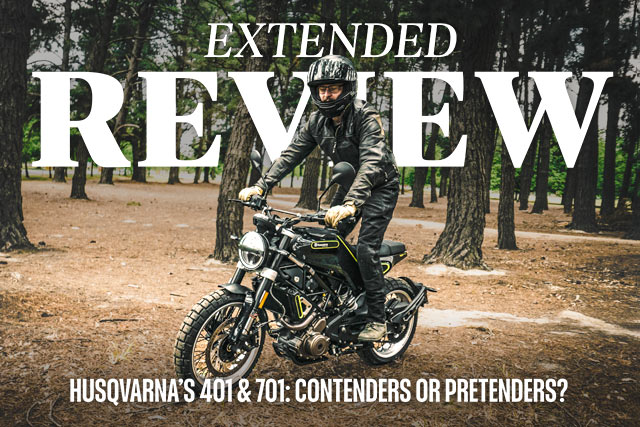 These bikes are nothing if not divisive. You’ll either think they’re the best looking motorcycles on the market or you’re just plain wrong. To my eyes they’re so damn striking I can’t help but love them. But you’ve probably already made your mind up about their looks. And as distinctive as they are, they’re also bloody strange beasts that sit in weird, confused end of the market. Not just because of their looks. They’re oddities. They’re both singles. They’re both based on KTM engines. And they’re both unlike anything I’ve ever ridden.

First up is the flagship, the Vitpilen 701. Of the pair it leads the way in terms of horsepower, displacement and above all, price. But we’ll talk about the money later. In the meantime, here’s the basic concept.

The Vitpilen 701 is a modern cafe racer. It’s a lightweight, stripped-back single with very few bells and whistles. You’ve an engine, a throttle and virtually no fancy shit hanging off it. It’s designed to be a light, punchy bike to fling around corners. And be damn gorgeous.

And they’ve knocked that brief out of the park. It’s bodywork is carefully crafted, the lines are gorgeous, the colour pallette near perfect and virtually every single inch of the thing looks to be the product of deliberate consideration. I say ‘virtually’ because the view from the cockpit shows the most head scratching warning message I’ve ever seen flash up on a motorcycle gauge.

“WARNING: SIDESTAND DOWN.” That’s one step away from saying, “HEY DICKHEAD: THIS IS A MOTORCYCLE!”

It’s equal parts hilarious and overbearing. But hey, Husqvarna’s Swedish, and the Swedes gave us seat belts, so maybe that sort of ‘safety first’ caution is endemic. That being said the gauge shows all the important stuff just fine – speed, turn signals, shift indicator and any warning lights it might throw out at you.

The fact that it does all this using a large, plastic LCD display will probably split the crowd: some will love the innovation and the way it works with the rest of the bike’s Blade Runner-esque looks, others will bemoan the acres of ABS and how it’s function following form. I’d probably fall into the latter category, but it’s horses for courses I guess.

The 701 runs a variation of KTM’s LC4. I’ll spare you the mechanical details, but it’s a highly strung, high-revving single that manages, somehow, to put out near 75 horsepower. That’s a stupid amount of power from a single. It revs like an inline four and has a completely linear power delivery, even if it lacks some of the torque you might expect with a one-lunger.

The raw power figures have led some in the press to declare it the greatest single cylinder engine ever made. And yeah, it is, if the greatest jazz you’ve ever heard is a MIDI file. It’s technically perfect, but I feel it lacks some of the bump, growl and shake that I like from a single. Hell, it’s counterbalancers have counterbalancers.

But I do love what it offers the rest of the package. It’s a single – so it’s light, thin and it’s mounted down low. That makes the 701 a pretty special bike to throw around a set of corners. 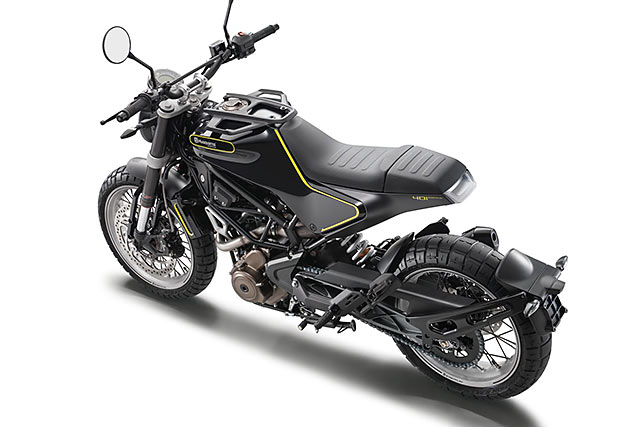 Hell, if you can find a lighter, thinner and more nimble thing to throw down a mountainside you should put a dress on it and marry it.

The engine and the chassis combine to be one of the most fun bikes I’ve tossed a leg over. The suspension, WP at both ends, is adjustable and responsive. The chassis’ taught and the engine, like all good singles, has you holding the gears long, revving it out on some corners and short shifting on others.

It’s stable, it holds lines perfectly well and the tiniest tap on the clip-ons has you changing direction without it ever feeling skittish. I’m convinced that with a half competent rider on board (i.e., not me) nothing could catch this around your local set of twisties. And not much would look better while doing it. 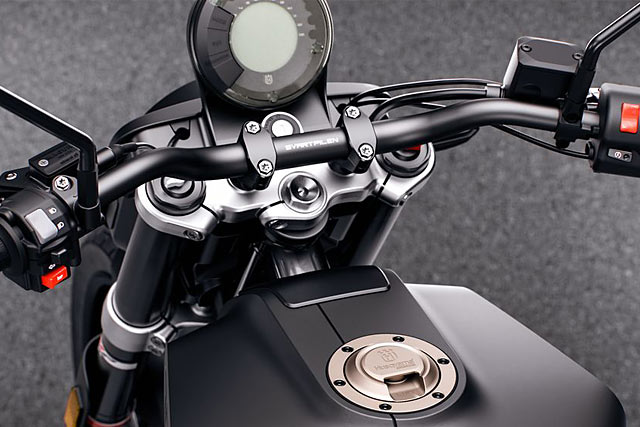 The 701 pretty much does one thing; it’s fun around corners. It does this exceptionally well, but for many people that won’t be enough. If you sleep on piles of money or are one of those tech billionaires boomers for whom assets stick to like poop to a blanket, then it’d be an amazing toy. Something you can wheel out, belt around a few twisties and park.

And there’s absolutely nothing wrong with that. Hell, a Ducati Panigale V4 was made for that very reason. For many riders it’ll be perfect. Anyone who loves a bike that weighs less than a 90’s supermodel and handles perfectly will adore it.

But for me as someone who doesn’t have the cash to buy a brand new factory bike every twelve months, it’d be hard to justify the US$11,900 price tag; that’s pretty much the same as a BMW R nineT. And it’s extra hard to justify when looking at the single cylinder or when listening to the rather plain standard exhaust note that’s often overwhelmed by mechanical whir of the LC4. But for some people the handling, the looks and the exotica will make it all worthwhile.

The riding position is about a comfortable as it looks. The head down, bum up routine is fine and the seat isn’t as bad as you’d think. But even for me with my manly 5’8″ dimensions, it had my legs cramping up after around an hour.

So you won’t be touring on it and you won’t be taking a pillion on it. I’ll admit that it’s buckets of fun, but so is pushing old people down stairs. And that’s a lot cheaper than this. Put simply it’s pretty darn good, but it’s not my pick of the pair. For me the other new Husqvarna is the one to watch. 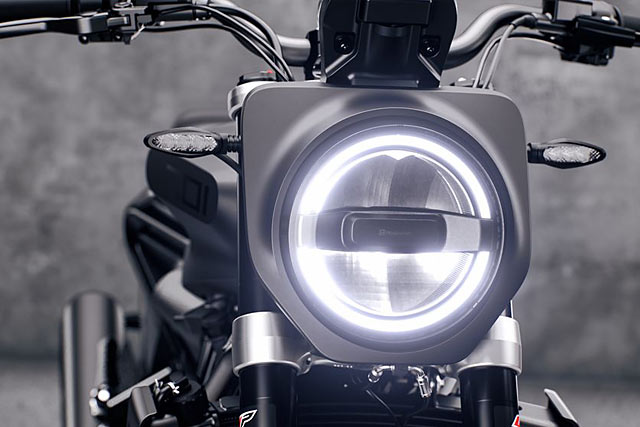 The lil’ Husky follows the same design brief as it’s bigger brother. It’s a lightweight frame with distinctive bodywork mounting a fun little KTM single. We’ll talk about the engine in a bit. In the meantime: just look at the thing…

Now I know that every schmuck with a motorcycle thinks people are oogling them. From the most boring VFR800 with a tumour-like tailbag to the blandest of R1200GS’s, owners seem to think that pedestrians are the paparazzi and their bikes, the Kardashians. Yes, they are looking, but it’s in the same way you stare at a fat bloke on a mobility scooter or the town weirdo who wears head to toe camouflage down the shops. 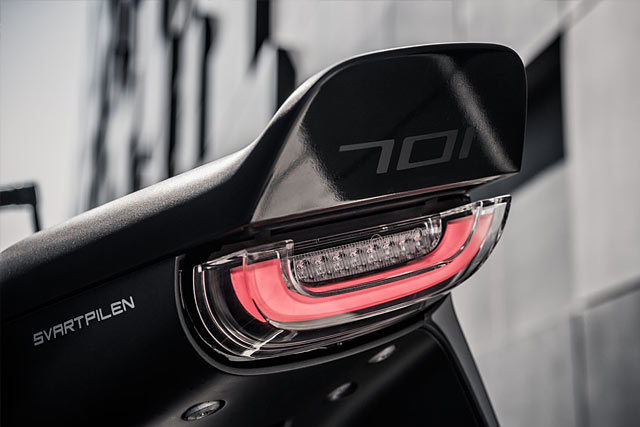 SHE’S GOT THE LOOK

But the Svart really turned heads. Greasy kids in cars smiled and waved. Other motorcyclists stopped to start shouted conversations with their visor down. Interstate truck drivers gave me huge thumbs up as they stared through meth-shrunk pupils. It looks bloody amazing.

And if you like it in the photos you’ll only like it more in person. It’s hard to tell through a blog jpeg, but the 401 is tiny. While it’s surprisingly tall, and I can’t quite go flat foot on it, the bike still manages to be diminutive. Just wheeling it around a carpark had me wanting to take it out for a ride. It’s like a pushbike with an engine. A great little engine.

Some of the dumbest dribble I’ve read on the internet recently has been about these two motorcycles. People keep sprouting the line ‘they’re just rebranded KTMs’. No, I don’t think there’s any overlap between KTM and Husqvarna with these two. First up, if you’re looking at a 390 Duke, you’re not going to be looking at a 401. I know a few people seriously considering the 401 who would never, ever, ever consider the KTM.

This 401 takes the 390 Duke’s six speed water-cooled 370-something-cc engine. These things are everywhere, and seem to be the Ducati Desmosedici of the third world, getting belted through the streets of Delhi and Buenos Aires and Sydney. The locals there love them and abuse them. The charm’s in the engine.

The little six speed single is slick, fun and reliable. It can sit on a 110km/h freeway and buzz along at 5500 rpm and still feel happy. It can be revved out. It vibrates and thrums and it has more than a little bit of chutzpah when you bang it up through the gearbox to reach a decent speed. It’s the perfect engine for the 401.

The 401 is an absolute blast around town. Yep, it’s light. Yep, it’s thin. Yep it can split traffic better than just about anything else out there. Part of that is the angle of the steering head. I’ve got no idea what it is but it’s damn steep. It steers like a scooter. You’ll carve up traffic on it like a police horse in a riot.

It’s comfortable, it has a two part seat that means you can stick a factory rack on it, it can tour, it can do light dirt work and be unbelievably striking while doing so.

It’d be the perfect bike for a cashed up learner who wants a modern motorcycle. Someone who doesn’t want to mess around with something like an SR400. Someone who wants something light and easy to ride. A commuter, a weekend ride and something that will turn heads wherever you go.

But no, it’s not perfect. It’s a niche bike with a niche problems. It has the same plastic dash as the 701. Turn the bars full lock to the right and you’ll squish some cables and brake lines. The levers feel a little budget and the ABS threw up the odd warning light or two. 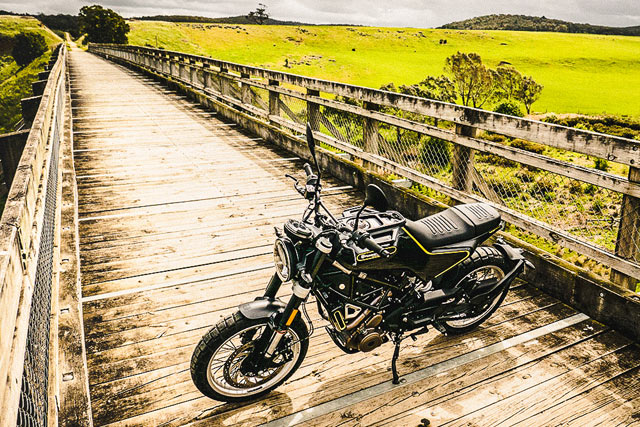 I love the 401 and the 701. Okay, I’ll admit that I think they’ll sell around four of the bigger 701s here in Oz, but there’s something really ballsy about the way that Husqvarna have released a concept bike and stuck through it, consequences be damned.

But while the 701 is a very specific tool that will, doubtless, make someone in a very different financial position to me really happy, it’s the 401 that’s my pick of the pair. I think it looks better. It’s lighter. And oddly, with my everyday mix of commuting and weekend highway riding, is better suited to what I want a motorcycle to do.

But, everything else aside, Husqvarna have built two of the most striking, distinctive and unique motorcycles to hit our end of the market in many years. They should be applauded. And if someone says ‘the difference between these and the KTM isn’t worth it,’ tell ‘em to hop on their VFR800 and bugger off. 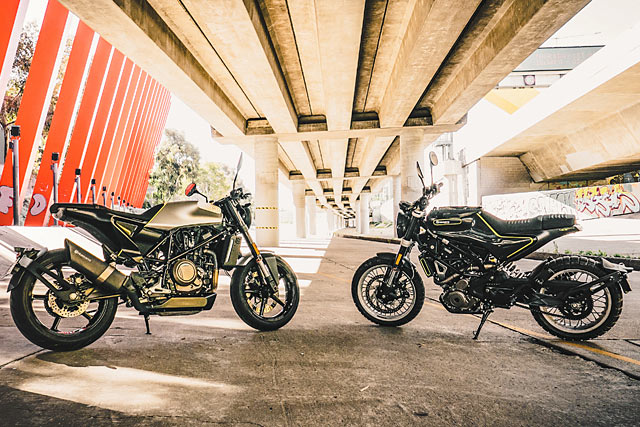 Husqvarna’s return to the street bike sector has certainly stirred things up. All three of the new bikes (soon to be four) are attention grabbers and deliver a great riding experience to boot. With KTM DNA running through their veins I didn’t expect anything less. Sure you’re paying a premium for the Husky badges and bodywork but looking this good doesn’t come cheap.

Although my obsession with motorcycles is focused on cafe racer styled machines, it’s the smaller, Scrambler styled Svartpilen 401 that won me over. The Vitpilen 701 is powerful and astonishingly light, but my riding consists of mainly city commutes. The more I enjoy that ride the better because city traffic can be a real drag. The Svartpilen 401 had me grinning like a fool as I effortlessly weaved through stationary traffic and got the jump on cars from the lights (sometimes on one wheel). I also can’t ignore the significant price difference.

If looking good and having a great time are two of your life goals, I’d recommend giving the 401 a go.