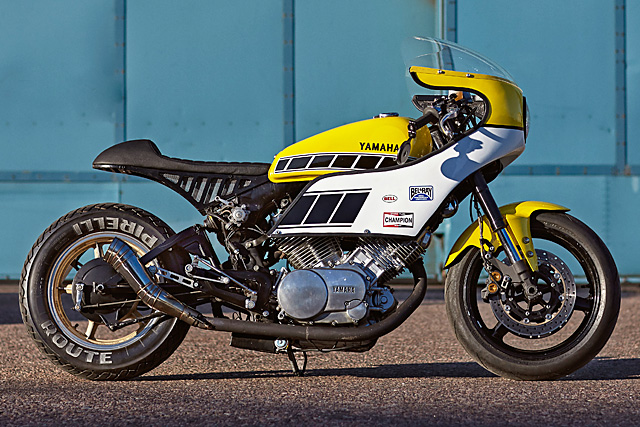 With the Isle of Man TT over for another year the wee little island in the Irish Sea returns to its quiet self once again, but for those new to the sport they may be unaware that the TT was once part of the Grand Prix World Championship. Boycotted in the ’70s by some high-profile riders because of safety concerns the GP circus moved to mainland England, but it wasn’t the only road race to disappear from the GP calendar. As a young lad in Finland, Ville Hänninen used to attend another hay bale lined “circuit”, the famous streets of Imatra and watch the 500cc two-strokes go wild. But one bike and one machine always caught his eye, the American taking it to the almost exclusively European pack, the King Kenny Roberts and his Black and Yellow Yamaha. To bring his childhood back to life Ville has pieced together a stunning Yamaha XV750 that has the wild Imatra road racer look down pat! For Ville however his build didn’t start with a motorcycle but the front fairing currently fitted to the bike that once took pride of place on a friend’s wall. Looking at it instantly brought back memories of the Imatra circuit, 2-stroke oil and the King. With the fairing now his, Ville had to decide exactly what bike he’d fit it to and the hunt for a retro racer foundation began. The answer came in the way of a 1983 Yamaha XV750, the donor bike had seen better days but the combination of a V-Twin engine and especially the shaft drive fascinated the Finnish watchmaker and motorcycle designer. With the right bike and the major element of the design in his hands it was time to pull the bike to bits and start to piece together a machine that looked like a racer but was built for the road. With the engine out the frame was cleaned up and given a new lick of paint, before the entire rear subframe and its bulky two up seat were shown the door. In their place Ville designed and then fabricated a new subframe out of 10mm tool grade aluminium plate. The clever aspect of his work is that it is made of 5 individual pieces all milled and machined by Ville himself and are bolted together rather than simply welded. Not only does this mean it could be disassembled during the build to access other parts of the bike, it can also be replicated for future customers who themselves own XV’s and provides easy access to the rear shock and electrical components. A seat pan and template was then made up which was taken to a friend to be upholstered in black leather and the sides of the subframe filled with mesh inserts. Still in fabrication mode and with the rear end now shorter and narrower a new battery box was crafted and is placed under the swingarm pivot point in the frame and hidden along with some of the other vital electrical components. While a new mounting bracket was welded up for the rear of the tank to bring the underside parallel to the ground rather than the factories cruiser styling. With the back-end sorted the work on the big front fairing could begin but you can’t just slap on any old racing fairing to the bike of your choosing and expect a direct fit. Ville crafted a set of brackets to secure the bulky glass work in all the right places. This wasn’t an exercise in creating perfection but like the race bikes of old, built to be functional and sturdy with the ability to take off the fairing with just the removal of a handful of bolts. With it fitted up to Ville’s satisfaction it was time to lay down the classic Yamaha race team paint scheme with a white lower section, yellow upper and the famous speedblock graphics in black. The arrow straight tank is colour coordinated to match with more Yamaha yellow, speedblocks and a new chrome filler cap. To get the race plus road look finished off a clear screen is fitted up just like King Kenny’s but instead of a race number the pointy end houses a functional headlight.

With the look spot on it was time to bring the mechanicals of the bike into line and the suspension tyre combo is a bit like the Mullet “hairstyle”; Business at the front, party at the back! At the business end the old telescopic forks have been swapped out for items with 30 years more technology in the way of Yamaha’s R1 43mm inverted forks. Fitted to the XV frame complete with their sturdy triple trees, fully adjustable shocks and lightweight wheel they add endless gains in the handling department. But it’s not just in ride that the XV benefits with Ville maintaining the R1’s 300mm twin disc brakes and four piston calipers each side for far superior stopping. Braided brake lines, the R1 wheel fitted with a Pirelli Diablo tyre and the R1 fender finished in yellow complete the front. While out back it’s party time with the single in frame shock taking control of a rear wheel from a 1986 XV that’s been wrapped in Pirelli’s aggressive rubber for the road, the MT 66 Route with painted logos. Spinning up that rear hoop is the dependable Yamaha V-Twin with the single cam, 748cc now punching out some extra torque thanks to a few key modifications. The engine now spitting flames thanks to 2 into 1 headers that finish out the right side in a theme matching GP style muffler in stainless steel. To click-through the five speed box and jam on the drum brake rear Ville mounted up a set of Tarozzi rearsets with customised linkages to keep them positioned rear of centre for a racey riding position. The switch to the R1 front also provides the clip-on bars, with the controls and master cylinder a mix of the old and new. Some road going compromises are made in the way of bar end mirrors, a custom plate holder and speedo but all are subtle enough not to take away from the overall racing feel of the bike while still adding the required practicality. With the sponsors decals applied Ville is ready to take to the streets “Now, riding the completed bike, I feel I have accomplished in bringing a piece of the nostalgic racing spirit into the modern street view.” But his build might be more than a little slice of inspiration with his Imatra inspired road racer finished just as word comes through that Road Racing is set to return to Finland in a big way. With a number of Finnish riders having competed recently at the Isle of Man TT and other road races in Northern Island they are bring their love of the sport back to where it all began for Finnish riders, on the legendary streets of Imatra where crossing a railway line is just part of the on course action. Parked up by the side of the track this Kenny Roberts inspired Imatra racer will remind the old brigade of times gone by as a new king of the roads goes roaring by.