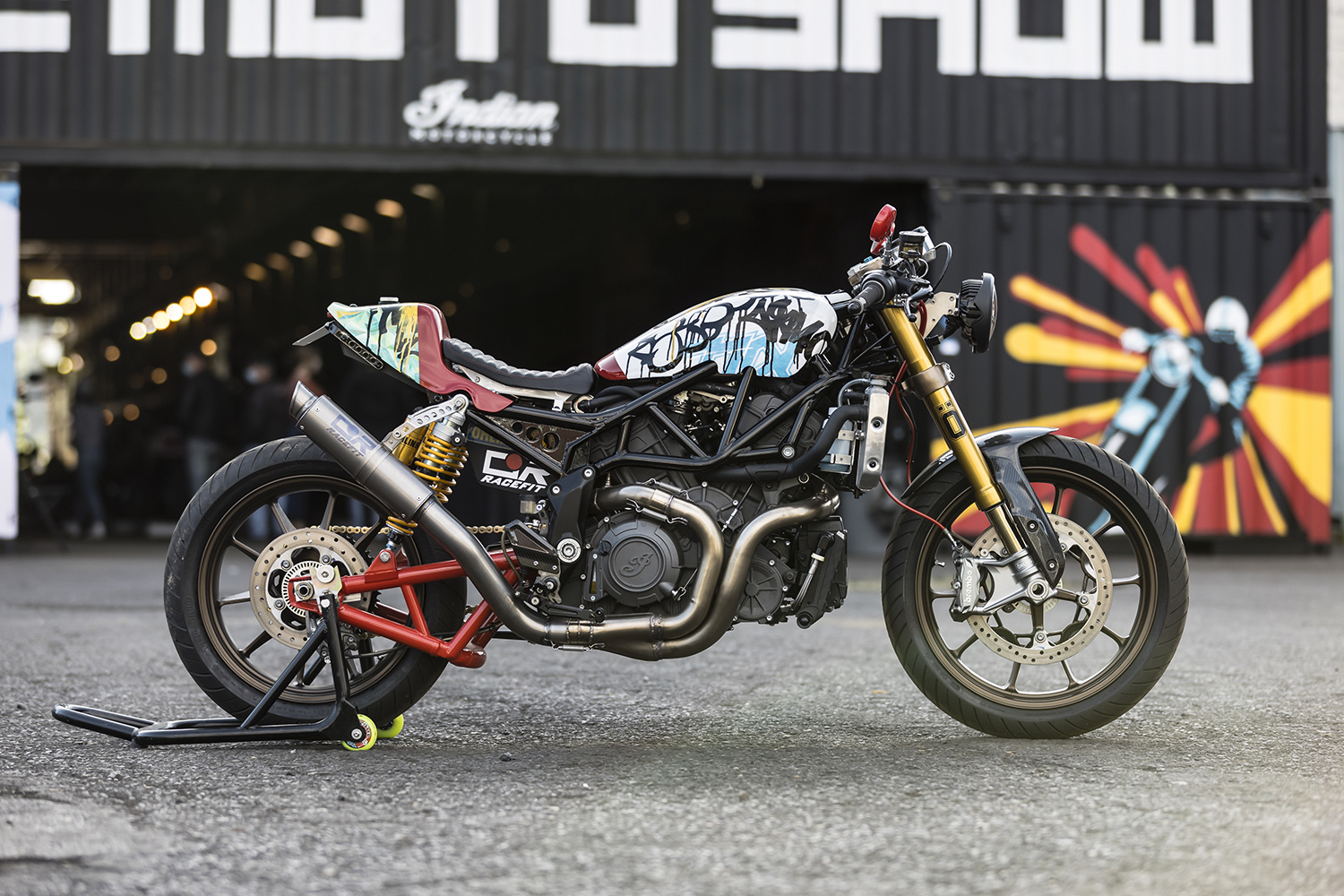 It’s true that there is a lot to learn from a name and Church Of Choppers has been producing some of the scenes best Harley’s for a very long time. But don’t let it fool you, when it comes to motorcycles there is almost nothing that Iowa’s Jeff Wright can’t do. From incredible Choppers and Bobbers to modern machines and re-imagining Sport Bikes, his ability to build custom cool is among the world’s most elite. So it comes as no surprise that when he turned his attention to an Indian FTR 1200 S, the results would be spectacular. But to really appreciate what he’s done, you have to go more than skin deep and study the detail on this brilliant build.

We’d be here all-day trying to list all of Jeff’s achievements, but from competing at the AMD World Championship of Custom Bike Building, to showcasing at the The Brooklyn Invitational, and sending a BMW to Europe to race at the Essenza Sprint, his achievements and builds are as diverse as the bikes he chooses to base them on. It is a pure love of two-wheels and knowing how to make them better in every single way! “About the same time Covid was sweeping the country, I picked up a FTR 1200S from Indians factory in Spirit Lake Iowa.” he tells us.

The idea wasn’t to go crazy and build a bike that was unrecognisable from how it began life, nor to go crazy with a bottomless budget, “Because of uncertain times, I wanted to make a statement with my hands rather than my wallet. I went to work on a plan and immediately took the bike apart and started cutting.” With the Indian stripped down and out of its clothes, the first thing to get cut off was the factory subframe. Knowing the bike was just for him and no passenger would be climbing aboard allowed him to simplify many things, taking off passenger peg tabs and the factory shock mount for a sign of what was to come.

Getting down to business and he fabricated an all-new subframe that merges cleanly with the stock chassis, the added bracing providing extra strength and giving the machine a race bike feel. But the big fabrication job was on the swingarm, “I spent late nights building the new swingarm to resemble the stock swingarm, but only upside down.” In truth it’s a hell of a lot nicer than a reversed factory unit, the low slung tubular design having hints of big-dollar items from Ducati and Bimota over the years. Then along with the frame, it was sent to Traxx Performance Powdercoating for Polaris Red and Wet Black powder.

On the new subframe and swingarm Jeff had added a pair of shock mounts, which allow for the conversion from the single lay down shock to the twin setup you see before you. And if you’re going down the path of such a change then why not go the whole hog and fit a pair of fully adjustable Ohlins so the bike can really be dialled in! The front doesn’t miss out either, with Ohlins forks taking care of the suspension and radially mounted Brembo calipers ensuring the Indian stops as well as it handles.

Moving his attention to the bodywork, underneath it all first goes an all-new fuel tank that Jeff fabricated in-house. Then it was time to hand form the panels, “I pulled both side panels in as tight as I could. Changed some lines ever so slightly, and tied it all together. Fibreglass is fun stuff,” Jeff smiles. The bodywork he has crafted gives the Indian a tighter, more compact look, allowing the big V-Twin engine to take centre stage and giving it a race bike for the road kind of vibe.

The crazy paintwork only accentuates that look further, expertly laid down by Jeff and Dana Harrison, it just makes you want to have fun looking at it, and gives the impression that this visual statement looks best when Jeff has the throttle wide open and the FTR on the back wheel. To match, a new seat was formed by Rich Philips with the black leather and colour matched dark red stitching tying it all together. The fun then continues at the front with a pair of Indian headlights bulging out like eyes affixed on the road ahead.

The hulking V-Twin engine doesn’t miss out either, with the polished rad guards and race bike overflow bottle adding to visual theme. But the big change comes in the way of the Racefit “Longhorn” Growler exhaust, with all titanium construction saving an enormous 7.2kg and thumping out one hell of a sound. A set of clip-ons with Domino grips and a pair of Gilles rearsets to match transform the controls of the bike. And you start to realise what at first appeared to be a cool paint job on an otherwise stock FTR 1200 is actually one hell of a clever transformation that improves the bike in every single way and prepares it for what the Indian does best; having a blast on two-wheels, as the backs roads of Iowa become Jeff’s private playground.