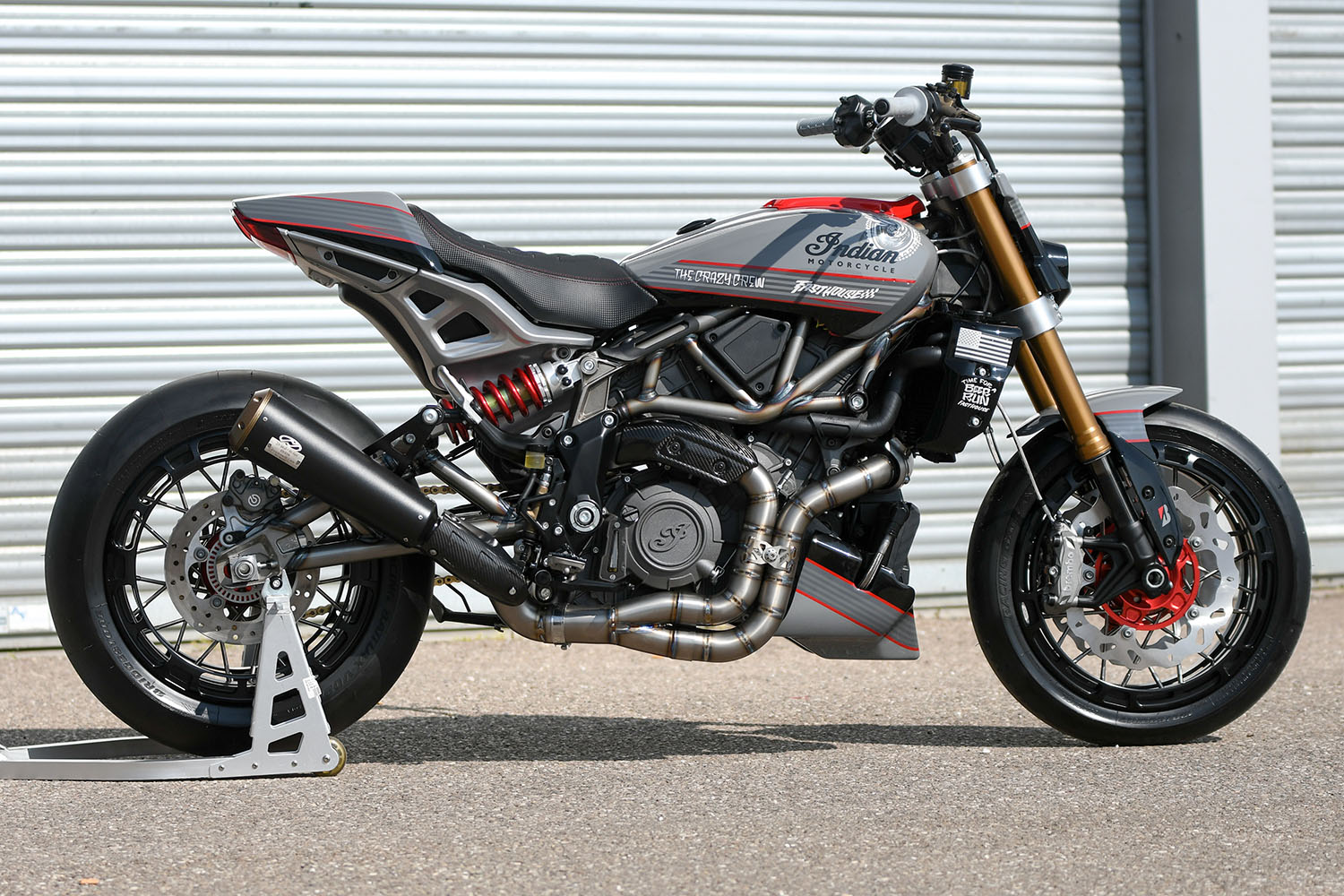 It was one of the earliest engine configurations used in motorcycles and it remains incredibly popular to this day, the big V-Twin and its thumping torque is an addictive animal. Those men in Milwaukee have built an empire on them, but if there is a criticism that remains, it’s not the engine design but the bikes they get put into. From manufacturers in America, Indian solved that problem with the release of the incredibly popular FTR 1200, finally a machine that could handle and take full advantage of all that torque. But if a single workshop has perfected their customisation, it’s France’s Indian Metz and they’re back with a marvellous FTR inspired by freestyle motocross.

Despite rising fuel prices that have you wincing as the numbers turn over on the bowser, V-Twins remain a favourite. And if you don’t want an overweight cruiser that can’t corner, there are plenty of options from both KTM and Ducati, that can pull your arms off in a straight line and still set a quick lap on the track. For far too long, the American’s where wasting their best contribution to motorcycling, and let’s be honest, Harley Davidson still is. But Indian has gone big with their investment in Flat Track and Super Hooligans racing, and the FTR 1200 for the road.

Having built a host of customs based on the platform, Thomas Castany and Alexis Masin from Indian Metz decided they wanted something fun and flickable, and took their inspiration from the world of freestyle motocross. Of course, they weren’t interested in backflips or whips, the idea was to create something that took the fun of FMX and translated it onto the road. Combining with their friends at L’Atelier 216 and sponsors such as mega-brand Fasthouse, work was quickly underway.

With a new Indian stripped down, the frame has undergone a unique treatment that is sure to be copied in the future. To really give it a custom look, the paint was stripped off and the steel trellis chassis was re-painted, airbrushed, and clear coated to give it the look of a hand-built piece of kit. The tubular swingarm gets the same treatment and for fewer bucks and without the engineering cost, you get a truly one-off look. The subframe has been painted silver and a bunch of brackets finished in a flat black to complete the design.

With the engine block back in the frame, measurements were taken and calculations made, with a total suspension transformation in mind. A CAD file was sent over to the guys at Usinage Concept, who spun their machining equipment into action to produce a billet set of triple trees. Not only are the two bolt upper and three bolt lower much stiffer than stock, but geometry tweaks and an offset change gives for rapid steering response. The stock fork internals have had their internals swapped out for a cartridge kit and the rear shock is a fully adjustable item from EMC.

Despite its big dollar price tag, this too would has been rebuilt internally to suit the exacting requirements of the build and the spring painted red to match the rest of the aesthetics. To boost the braking performance, the Brembo calipers get a new set of pads and the front discs have been swapped for wave rotors. The lines have been upgraded to stainless steel and both master cylinders switched to more powerful radial items. But it’s likely you’ll look right past them to those absolutely stunning wheels by Jonich.

Once again, million-dollar machines were spun into action to create completely custom designs, that feature machined hubs, beefy spokes, and rims with a unique cover. Part powder coated and polished, they’ve then been wrapped up in a set of slicks donated by Bridgestone for the ultimate in grip; just don’t let the fuzz see the lack of tread! The rims form a big part of the look and a host of carbon parts from the Indian catalogue were added. For more of the FMX vibe, a custom front number plate was shaped, with a single projector headlight shining through.

Then it was over to Supercar painters, AR Performance, who mixed up a batch of Audi Nardo Grey and added a host of the bike’s sponsor logos, and airbrushed some slick graphics. Back at Metz, the boys treated the engine to a full Zard exhaust that matches the frame perfectly and finishes out of a barking mad Dr. Jekyll and Mr. Hyde electronic muffler with three sound modes. To complete the FMX inspired design, the bars, pegs, and grips are from Pro Taper and the single speedo is repositioned. The finished item not only looks incredible but lets the guys make the most of that addictive V-Twin engine.