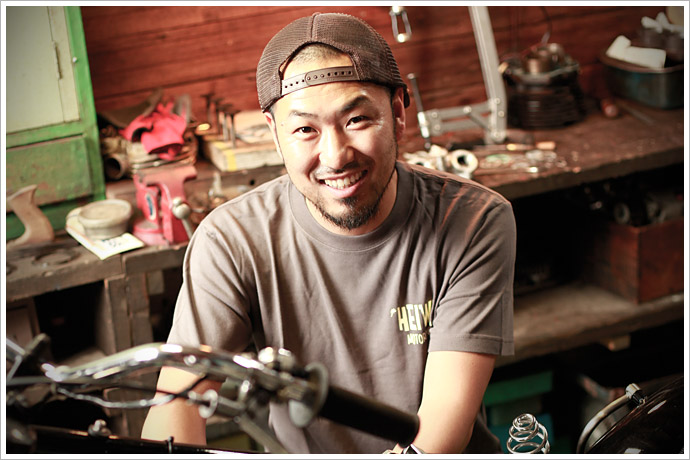 Meet Kengo “Heiwa” Kimura. You’d be smiling too if you had his skill set

I’ve been at this whole custom bike blog game for a while now, and if there’s one thing that has always gnawed away in the back of my mind, it is the following conundrum; Japan produces some of the world’s coolest custom bikes and yet, due to the language barriers, the scene is neigh on impenetrable to westerners. To me, it’s always felt like a massive gold deposit that’s been inconveniently placed under an ocean or right next to an active volcano. Everyone knows it’s there, but getting access to it just seems like mission impossible. Then, a few weeks back, it hit me. I have a Tokyo-based mate who I’ve known for over a decade. He’s Japanese born and bred, yet he speaks perfect English – what if we were to get him to help us out? So here’s the first of what I am hoping is many interviews with these Nihon-jin masters. Please bow deeply as we welcome Kengo Kimura San from Heiwa Motorcycles to our humble blog. Otsukare-sama desu! Can you tell us a little about yourself and Heiwa Motorcycles?
My name is Kengo Kimura and I was born in Hatsukaichi-city, Hiroshima. I entered Hiroshima University of Economics and while I was studying there, I got into motocross races. After I graduated from the University, I joined a shop called “A Beard” (too cool) because of the races, then I launched Heiwa Motorcycles in 2005. And I love Natto! (It’s like Japanese Vegemite. Consider yourself warned – Andrew)

Your website has over 50 finished bikes on it and you guys seem to make a new bike ever week. How the hell do you do it?
We’ve got so many orders at the moment and we are falling over backwards… As a matter of course, we work an extra hour a day. Now we have four employees plus myself; two laborers are working in our shop, one pin striper and one in accounting. We are making motorcycles nearly all by ourselves except for the paint. Right now we are making a new custom SR400 motorcycle for the New Order Chopper Show 2012 in Kobe being held on the 15th of July. Check out that tank – and I thought Scarlett Johansson was shapely…

Out of all the bikes you have built, what are your three favourite Heiwa bikes?
I like our T100 “Long Peace,” our XS650 SP, and our CB77 “Ancho Racer.” Those motorcycles are all narrow, lowrider and nicely balanced. Although this is the very tough question because we always work hard and do our best with every motorcycle. To westerners, the Japanese bike culture can seem a little strange. It seems to have a different set of rules to the rest of the world. Why is that?
I feel like many Japanese people like classic motorcycle. What sets Japanese people apart from people in other countries I think is that Japanese people ride their bikes every single day and they want to try to look good. Whenever you are in the USA, you will hardly see people who are riding custom motorcycles on weekdays. I have this image that they enjoy riding a custom motorcycle on weekends only.

To Japanese eyes, how does the American or European custom bike culture look?
I am always trying to make my bikes more narrow and compact, but very big and flashy ones seem more acceptable in the states and Europe, isn’t it? Heiwa’s take on the Honda Rebel. The word “better” comes to mind

What is your personal bike at the moment?
If I had a personal one, I’m afraid I’d have to sell it to someone. So I haven’t any custom motorcycle at the moment…

How does Heiwa design bikes? Sketch? Photoshop? Imagination?
Sketch and Photoshop make a concept look pretty cool, but it only makes you concentrate on reproducing it faithfully. So I do not draw at all – to begin with I call up a mental image of parts in detail, and then I build it in my head. If I had an unlimited budget for Heiwa to build me their own “perfect bike,” what would it look like?
Generally motorcycles are build with normal parts and parts cannibalised from other bikes but, if you have enough time and money, we will build you a motorcycle with parts that are all hand-made except the engine. What’s the most beautiful non-Heiwa custom bike in the world? And what about factory-built?
The Chabott Needle perfectly fits the image of it’s name and I think it’s very cool because of it’s simplicity and hand-made feel. And the Honda C72 – I like the distinctiveness of this Honda and I think that its looks are very stylish! What does 2013 look like for Heiwa?
We are looking to expand on our original parts range.

If Heiwa Motorcycles was a movie, which one would it be?
Cool Runnings! Welcome to the world’s most unassuming custom bike shop