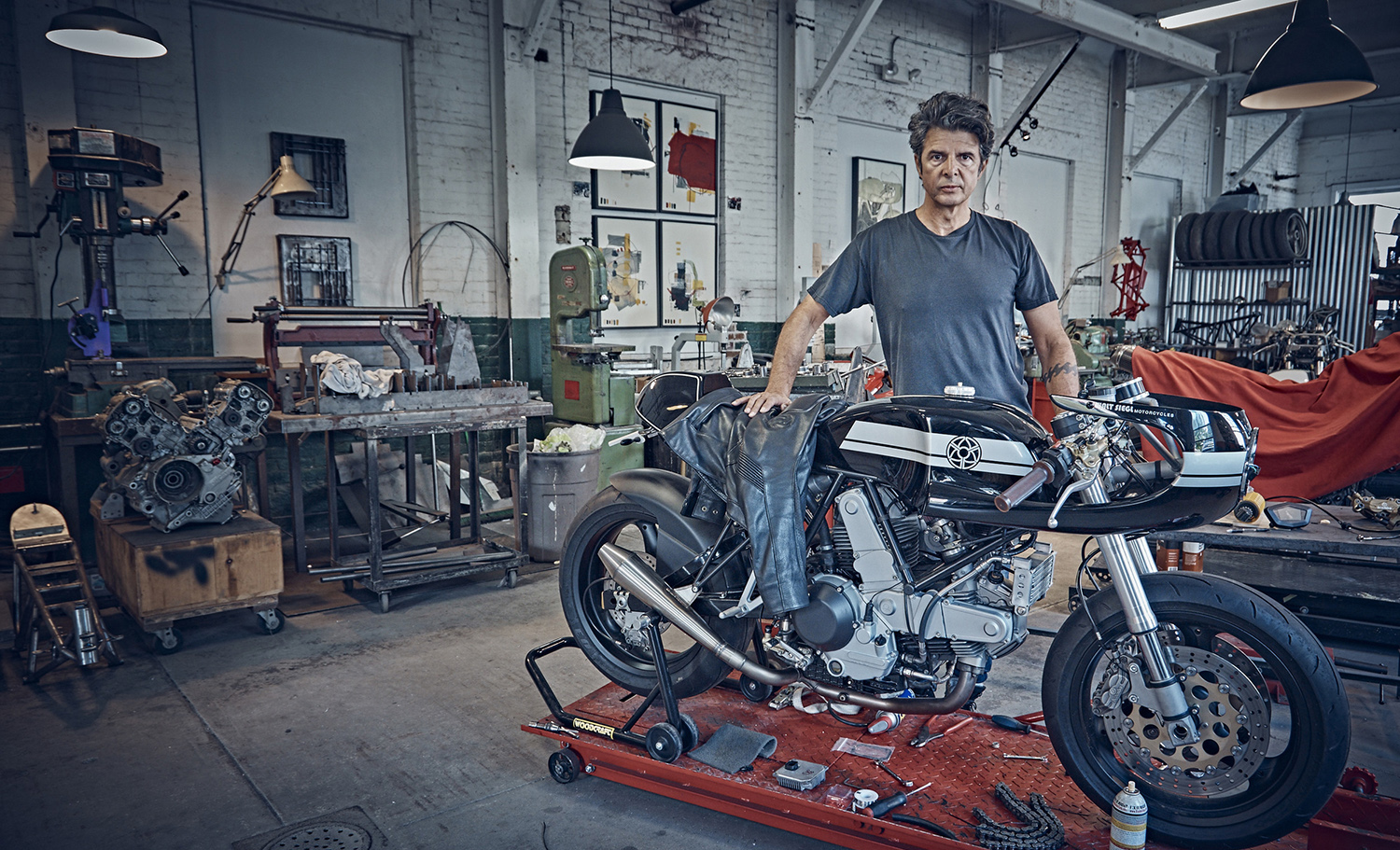 Austrian-born Walt Siegl built his first bike at the age of fourteen using three different bikes and whatever parts he could get his hands on. His love of motorcycles runs in the blood, with his father and grandfather both passing on their passion for riding and building bikes to the young Walt. His custom builds are not only aesthetically pleasing but are built to be ridden, and ridden hard. We managed to do a quick interview with Walt and asked him some questions about his love of Italian machines and his thoughts on the future of electric bikes.

Can you introduce yourself to our readers?
Hello, my name is Walt Siegl. I’m an Austrian-born designer/builder of custom and limited series motorcycles. I arrived in the U.S. in 1985, lived in NYC until 2007, when I moved to New Hampshire.

You studied metal sculpture and jewellery making as a youngster in Austria. How did you make the leap to building motorcycles?
I had motorcycles in my life from early childhood, through my grandfathers. I started riding my own bikes in my early teens.

What brought you to America from Austria?
I joined the Austrian Foreign Service in the early 80s and, while stationed in Moscow, found an opportunity to get transferred to New York City to work as a representative of contemporary Austrian culture.

You have one of the most beautiful workshops we’ve seen. How did you end up in New Hampshire? What’s the building’s history?
We visited my wife’s relatives in this area over the years, and I fell in love with the textile mill in Harrisville that was under renovation for several years. When I lost my studio space in New York City, we decided to relocate here and I was able to get a workshop space in the mill. It was a textile (woollen) mill since the early 1800s.

You have built so many incredible bikes, do you have a favorite?
My favorite tends to be my latest build, so right now it’s the electric concept bike I built for the Haas Museum in Dallas. But I’m just about to complete a Superbike, so we’ll see if I change my mind!

Recently you built an electric bike called ‘The PACT’ and also one for the Haas Museum. How was that process compared to combustion engine builds?
The PACT is a limited series of eight electric bikes designed with my friend, Mike Mayberry of Ronin Motorcycles, and built in my shop.

The electric bike project for the Haas Museum was my third for the museum, and Bobby Haas was kind enough to leave it up to me to decide between a combustion engine project and an e-bike. Since I have always been curious about current technology and alternatives in the transportation industry, I opted for electric.

Build process: A definite learning curve. Nerve-wracking but the design and build process was very enjoyable. Especially because it was given free reign.

What’s your thoughts on the future of electric bikes?
I think electric bikes are currently a real alternative for urban transportation. And technical developments move so fast, that within a short time range and range anxiety won’t be an issue anymore.

A lot of your bikes have a classic race bike aesthetic. Form and function. Is this influenced by your racing experience?
Yes, of course. Less parts, less weight, tight geometries, translate into agility, which is fun on the street and obviously super important on the racetrack.

Most of your builds use Italian donors. Is this based on performance?
Not necessarily. It’s only that most of the machines in my life were Italian (with one exception: I raced Suzuki’s for two years). One thing I want to say: Nobody builds bikes like the Italians. They celebrate their love of life, design and performance like no other.

You also have a stunning Alfa GTV. Another Italian. Is there a story behind the car?
It is an Alfa GTV1750, the higher revving version, before they turned to the 2-liter engine. I always had Alfa’s in my life. It’s just another example of how one gets hooked on Italian design. The visceral driving experience, the way it asks for the owner’s involvement. Owning an Alfa has always been rewarding for me.

What’s your daily ride?
I have a few electric bikes that I’m enjoying and use for R & D on my 20 mile round trip commute. At other times, I use my Fiat Abarth.

Dream bike if money wasn’t an option?
I guess I’m building my dream bikes. But the favorite motorcycle I’ve personally owned is my Ducati 916.

Is there one bike you wished you never sold?
There are two: My Ducati Pantah 650 and my 750 Laverda.

What’s your fondest memory on a motorcycle?
My first rides on dirt bikes. My first time trial racing. Driving over the Verrazano Bridge on a Harley chopper I built. And many more….

Have you ever had a serious crash?
Oh yes. Being on the race track does not go without falling off once in a while. I’ve had several. Two of them were very close calls, with long recoveries.

What racing did you do?
Time trails, similar to Isle of Man, but much shorter and mainly going up mountains in Austria and northern Italy. Two years of endurance racing for a small private team all over Europe. I did my last club race event 5 years ago.

What’s next for Walt Siegl? Can you tell us about what you’re working on now?
Right now I’m completing another one of my Superbike models. I have three more customs to build and several series orders to finish. Plus, I am planning to complete another e-bike project by the end of this year that I will try to put into production for 2022. This bike will fall into the pedal assist/moped category, and will be an affordable transportation alternative for the urban environment.