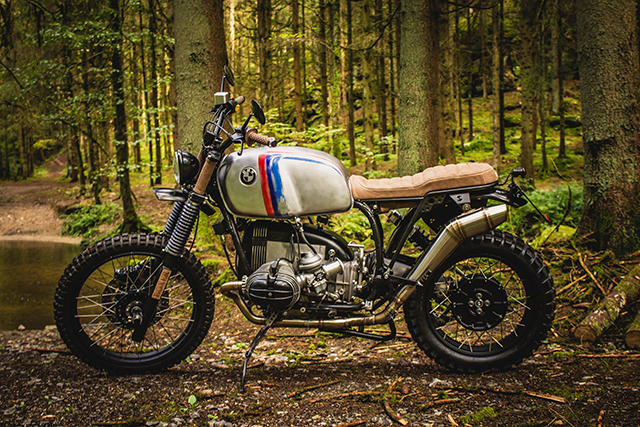 To say that the BMW R series range of motorcycles has become a huge hit in the custom scene is the mother of all understatements. Even the conservative big Bavarian caught on, releasing the R nineT five years ago and has the bruising R18 on the way. But aside from a cult following, the rest of the world has only ever appreciated the R series without falling totally in love. Not so in Germany, for the best part of 100 years the flat twins have been the number one machine. And to prove their passion runs deep, a customer approached Woidwerk for not one but two custom R bikes. This is the tale of the R100GS that emerged, no longer a big tourer but a sleek scrambler with plenty of custom style! 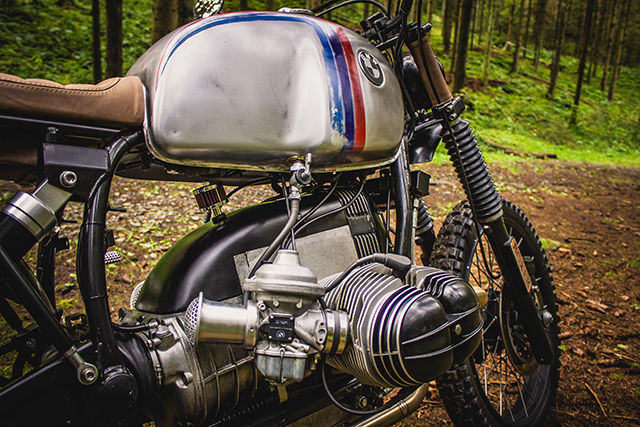 Woidwerk is run by master mechanic Ralf Eggl in the beautiful little town of Viechtach, that sits on the banks of the Regen river with the stunning Bavarian forests serving as his playground. This is a place where you can mount a strong case for owning just about any motorcycle in the BMW range. But the sheer versatility of the BMW Rs not only makes them the obvious choice but also means they act as almost the sole focus of Ralf’s business. He builds them to the highest standard in just about any style you can imagine and sells a range of his own custom parts that are of the highest quality. 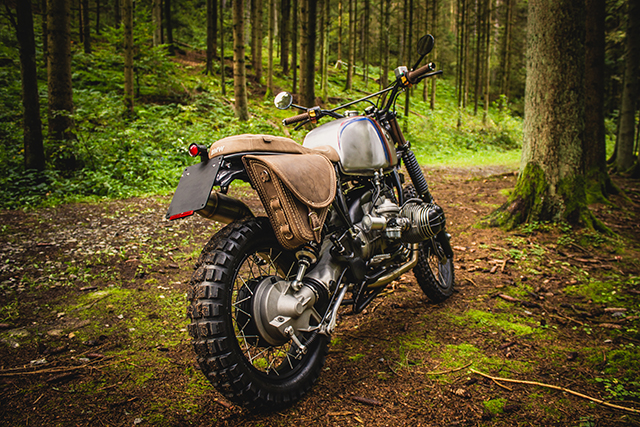 So it’s little wonder that a man with a pair of Rs should walk through Ralf’s door, “He wanted to have built a travel-ready scrambler from his GS. After a couple of interviews, he said that he still has an R80RT and whether we couldn’t build it as a café racer twin. Of course I was happy and built the two bikes for him,” he smiles. But with the R80 missing the tank, it was the GS that was first on the chopping block. With the donor being a 1992 model and nearly 30 years old, it was decided that it would be taken back to a bare frame to do the build the right way. 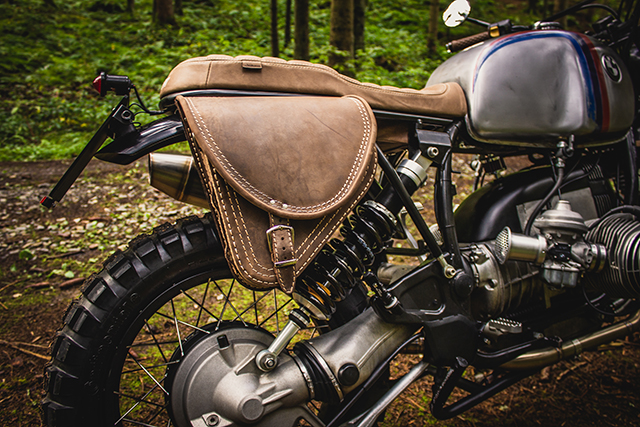 Ralf simply doesn’t cut corners and after preparing the frame to his meticulously high standards, the rear subframe was removed. In its place goes a Woidwerk item that is built in house and can be purchased from the companies website as a bolt-on modification. Every aspect of the part exceeds OEM standards and in both design and execution, it’s a work of art! The revised rear end meant there was no longer a place for the huge plastic rear fender, so in its place Ralf has bolted a hand-rolled item that extends rearward to catch the spray, as well as down to the swingarm for full coverage. 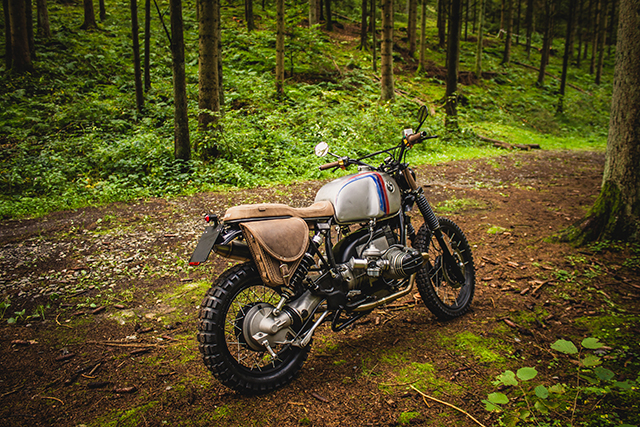 Upfront the fender is just big enough to do the job and high mounted moto style and all the changes so far given a coat of black. To give the bike an instant cosmetic transformation the barnyard sized GS tank has been ditched in favour of a unit from a R80RT Monolever that gives the true traditional R look. The tank has been taken back to bare metal, fitted with a Monza filler cap before a friend of the owner took on the job of laying down the traditional BMW colours in a well-worn appearance. Wanting to add a touch of class, Ralf turned to Leatherworks who stitched up the sumptuous two-up seat and saddlebag. 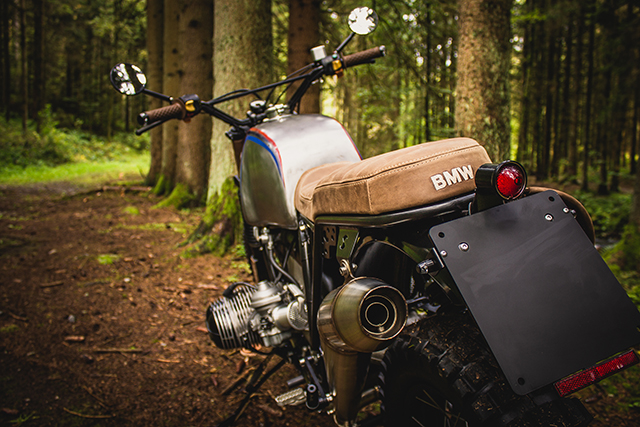 But they also went a step further, creating a neat leather pouch that holds the lifepo battery under the seat and a set of one-off leather fork covers. Then bringing a little of the forest into the build, another natural material was used, this time walnut wood was engraved with ‘Boxer’ for the lower fork legs. Before it was back to the practical and the front suspension was pulled apart and rebuilt using quality Wilbers internals. The German company also made a custom rear shock, while back at Woidwerk a big 320mm brake disc with Spiegler 4 piston caliper was adapted to fit the front. 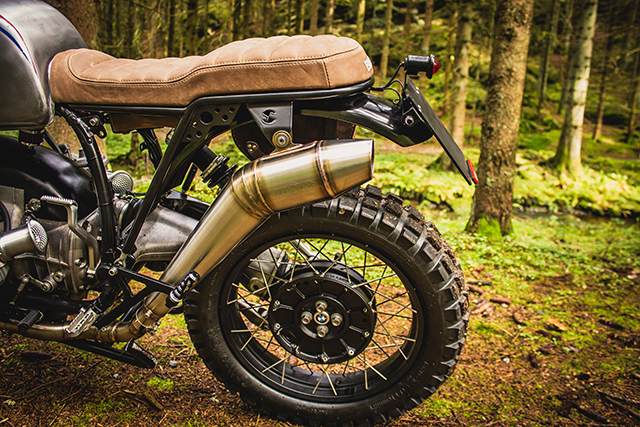 With the engine out, the thumping 980cc flat twin was given a freshen up and the short block bolted back together with a new top cover that incorporates an ignition key relocation. The twin bing carbs have been rebuilt and now make a rorty sound, sucking in copious amounts of air through the custom grilled out velocity stacks. While the full exhaust system was custom made by the good folks at Hattech, with the hand built muffler suspended from a mount that is neatly integrated into the Woidwerks subframe. With none of the factory bodywork left to hide the wiring, Ralf settled on building an all new loom. 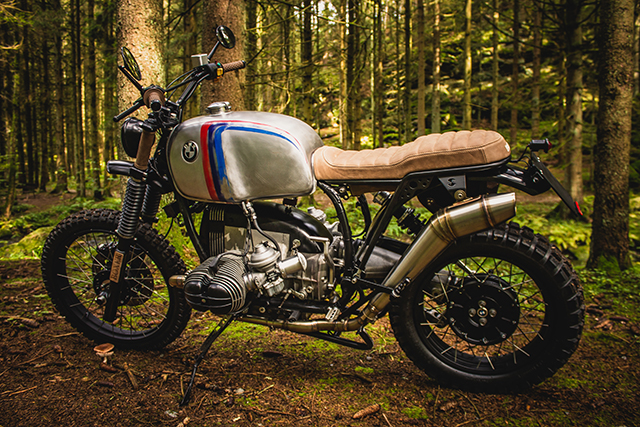 Completely hidden away, it controls the small Bates style headlight, classic tail unit, Motogadget speedo and the companies array of indicators. The front items sit at the end of the new bars that feature NOS switchblocks and diamond pattern Biltwell grips to match the leatherwork. To finish out the build the wheels have been re-laced with stainless spokes, before being wrapped up in the ever popular Conti TKC80 tyres. The finished product is brilliantly built in Ralf’s always understated vibe and almost looks too good to ride. I did say almost, as those gaps in the trees are begging to be explored at full speed as the glorious BMW twin echos with excitement, deep into the Bavarian forests. 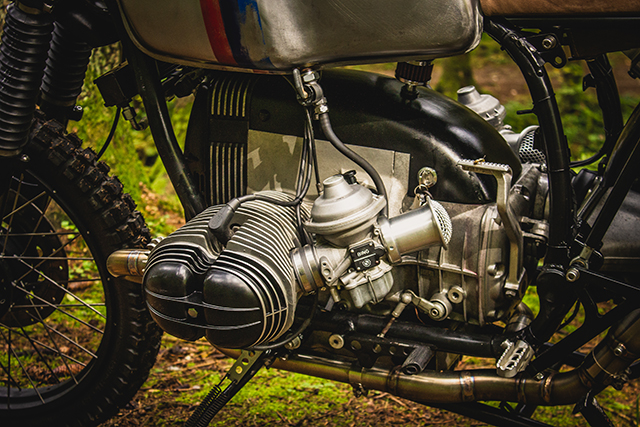 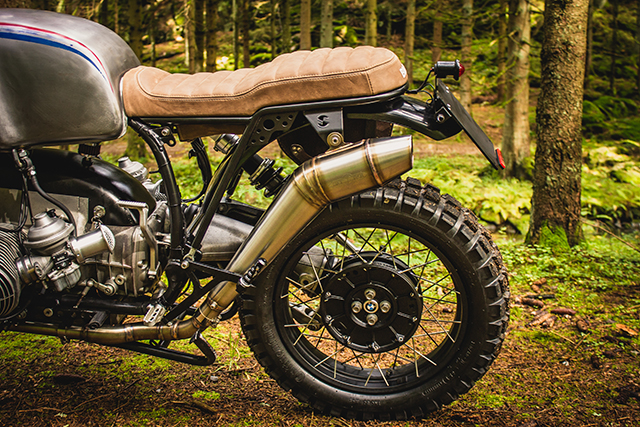 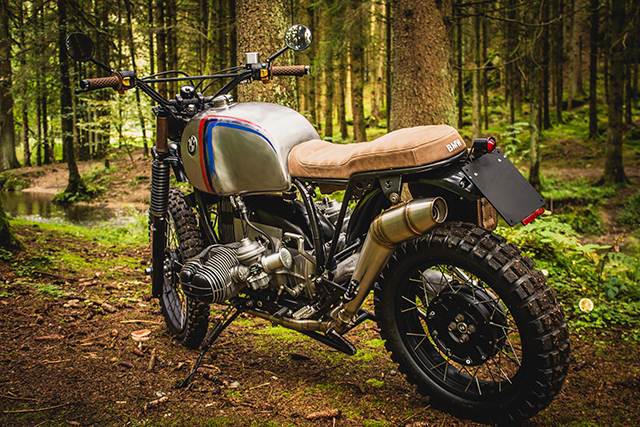 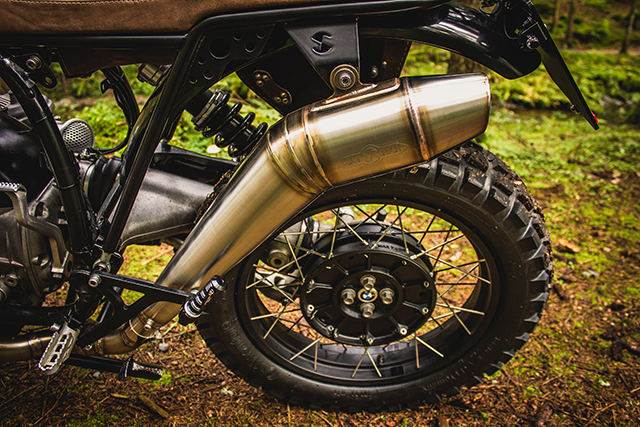 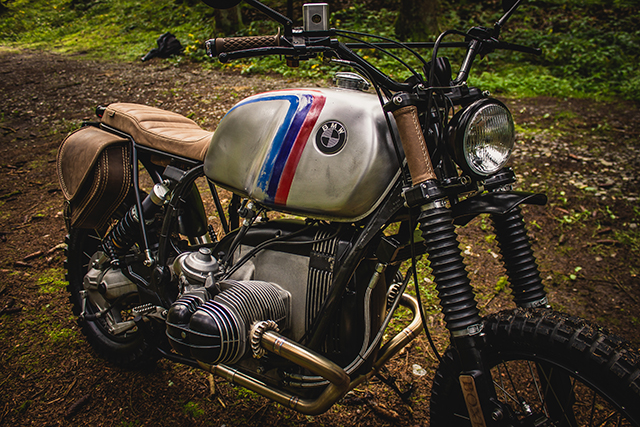