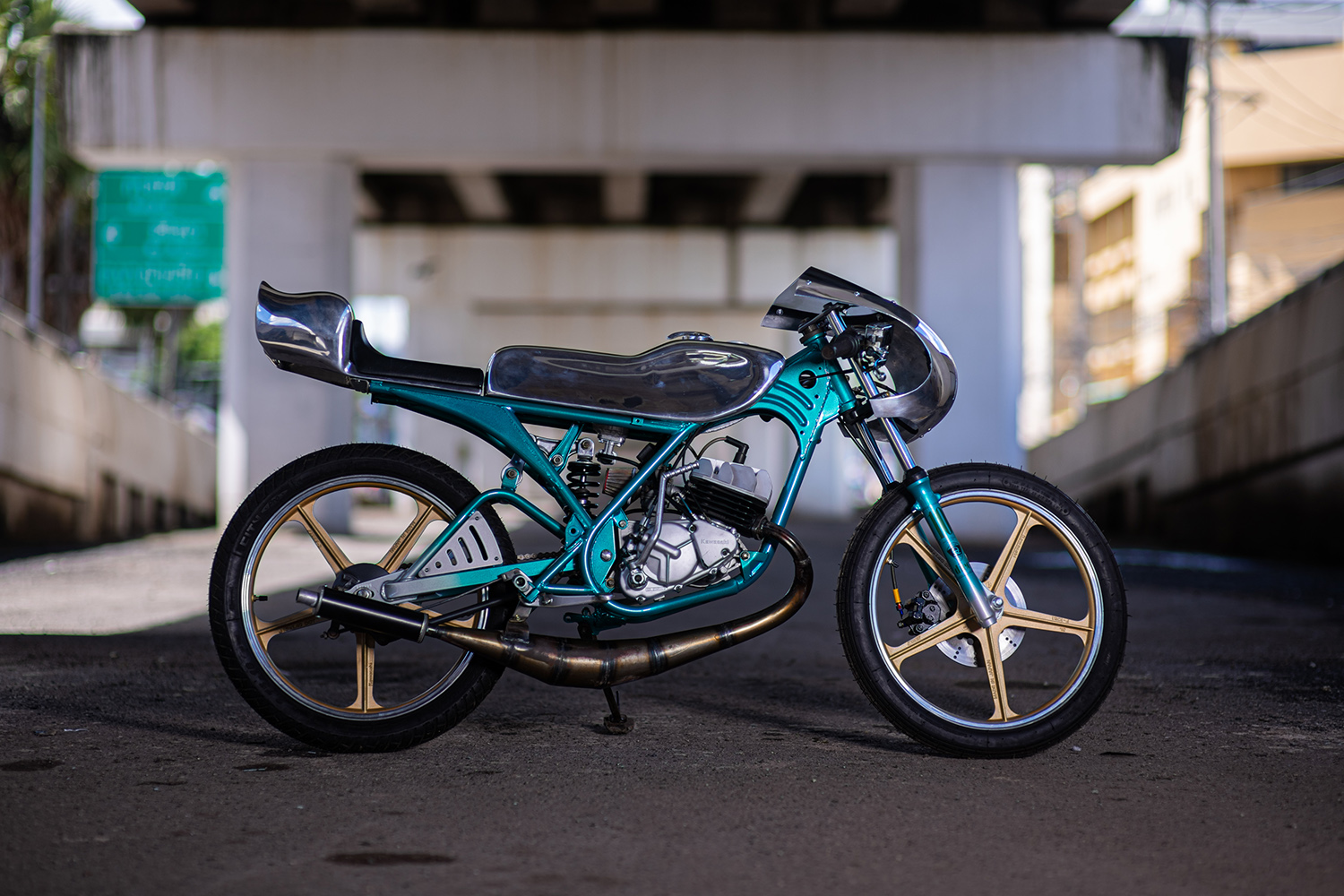 ‘A century is about events, a decade is about people’, and for the last ten years Markus Pintzinger has ensured that he’s surrounded himself with the best folks; and the proof as they say is in the pudding. He started out with just a laptop to work from and since then he’s built a business that sells custom parts, builds brilliant bikes, and employs a host of amazing people. So to celebrate a decade of success for Thailand’s Omega Racer, Markus decided to build a bike that captures all that is fun about living a life dedicated to custom cool. Known as ‘Cavalleggero’ meaning light cavalryman in Italian, it’s a little alloy atom bomb that started life as a Kawasaki AR80.

From Omega Racer HQ Markus gives us an insight into how it all started, “At that time it was just spare time fun, but within a relatively short time, we went full immersion in the beautiful world of custom bikes. And what a journey it has been. Now – 10 years later – the same drive is still pushing us to grow and improve on what has been achieved so far.” As well as the custom bikes list growing, so has their online presence with the webstore going from strength to strength.

But it’s still the bikes that bring in the crowds and this one would be a little different. “The base is a 1982 Kawasaki AR80 we found for $100. It was in a pretty rough condition when we got it, but we have a soft spot for small bikes here and really liked the unusual monoshock setup.” The humble AR is an underrated machine, with a small but loyal fanbase, nobody is more in love with them than Guy Martin who owned the 50cc version as his first road bike and in the moment he crashed it realised he wanted to be a racer; only Guy.

Having picked this example up so cheaply, there were parts that needed replacing and the Omega team was on the hunt. Weighing just 78kg from the factory, there was still some mass to be shaved and part of the rear subframe has been cut off the original frame. The rest of the chassis is prepared to perfection and then that beautiful stand out colour is laid down that would help the work that was to follow to really pop.

“After that we started designing the body parts. The inspiration came from the Italian 50cc race and street bikes of the late 60s and 70s. We just love these bikes, sporting super long and narrow tanks, tiny seats, and huge attitudes. The body parts were first sculpted with foam and then taken to our trusted friend and amazing aluminium fabricator Korn”. Mr Korn has done an incredible job, with the raw alloy flowing like liquid across the top of the bike.

Markus also had a special touch to add, “To commemorate a dear friend and riding buddy, Angelo, who sadly passed away last April, we immortalized his name on the tank.” With the look down pat, the controls are a big part of getting the Italian racer look right and a new set of footpegs and low mounted clip-on bars get the rider in that tucked down position to make the most of the horsepower available. The new tinted screen gives them something to hide behind and the controls on the bars are bare bones.

The lower legs of the front forks are coated in the same ‘Tropical Green’ as the frame, and rebuilt internally they help ensure the bike handles at its best. The rear monoshock was ahead of its time in 1982, complete with linkage, so to make the most of the arrangement a modern adjustable shock was sought to bring it up to 2021 spec. A new set of AR rims was acquired and the gold mags with raw alloy lip look the business, and wrapped up in vintage rubber are the perfect fit.

The little disc-valve two-stroke engine doesn’t miss out either, with the inside and out both restored to factory fresh conditions. To give the engine a chance to breathe, the carb draws air via a pod filter and the finishing touch is that killer expansion chamber exhaust, with blacked-out muffler to spit the sweet two-stroke song.

It’s not only the perfect way to celebrate a decade of business, but Markus has a gift for us all, from October 10th, Pipeburn readers can head over to OmegaRacer.com and enter the promo code pipeburn1010 for 10% off their next order.