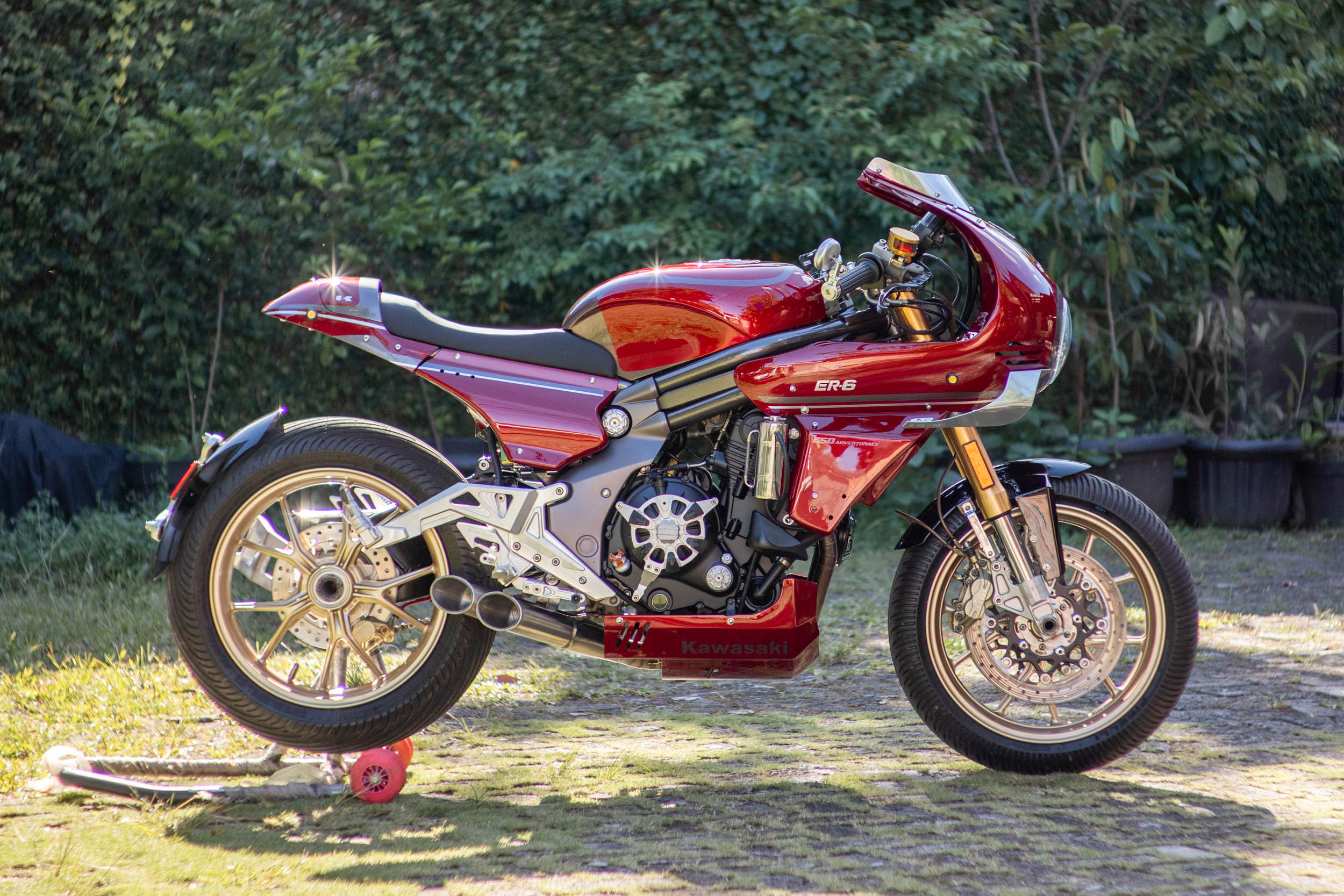 You need a vivid imagination, but swap the quiet corn fields of Iowa for the hectic city streets of Jakarta, and the dream begins to chart the same storyline. The field of dreams becomes the workshop of wonders and instead of a baseball diamond to bring in the legends of the game, it is the creative genius of Abraham Simatupang that has the crowds eagerly obeying, ‘if you build it, they will come’. And what he and his team at Batakastem Workshop build is an incredibly eclectic display of custom motorcycles at their very best. From gooseneck choppers to futuristic street fighters, super scooters, and handbuilt sportbikes for their city streets like this stunning Kawasaki ER6N which has undergone a true total transformation.

The sheer number of bikes and their truly unique characteristics is proof positive that Abraham has an imagination that never runs out of clever ideas. But perhaps what he and his team are most proud of is their ability to make just about anything from scratch and bring all of those wild inside the head images to life. That’s why when they say they’ve completely customised a motorcycle, they mean it, bolting on parts from a catalogue is just not in their DNA. So, all they needed to start this build wasn’t even a rolling bike, but an ER6 engine and half of its frame.

The front section of the frame retains the original, large tube perimeter frame rails, but the headstock has been modified to get the geometry the crew was after. The next change is a subtle one, unless you’re familiar with the ins and outs of the original Kawasaki donor. It did indeed come standard with a side-mounted mono-shock, but it was fitted on the right side of the bike. With the changes Abraham had in mind, it required that the back half of the frame be modified to accept the shock on the left side of the bike. Below this area, more bracing and welding were required to revise the swingarm pivot point.

All of these changes would allow for the fitment of the suspension that was patiently sitting in waiting and was originally intended for a very different machine, a big-dollar Bologna bullet. The first of these parts to be bolted in is the pro arm single-sided swingarm from a Ducati 1098, and instantly it gives the bike a stunning look. To support this, it made sense to use a shock that had been designed with this kind of setup in mind, and an Ohlins adjustable unit, with a spring painted to match the frame, bolts into the new mounts.

At the front end, the temptation was to go for 1098 front forks, but it’s a very front heavy bike, so Ohlins units from a Multistrada do the job perfectly.The bike was now coming together beautifully on the bench, so to get it rolling and down on the ground, the Batakastem team fitted up a set of forged lightweight Ducati wheels and wrapped them in Pirelli tyres.

The braking package doesn’t miss out either, with a full set of Brembo calipers and discs front and rear, and an RCS19 master cylinder to provide a perfect feel at the lever. While all of this was going on, Abraham had been finishing his design drawings for the bodywork, and what he realised is the Kwaka would need a new subframe first. Tubular bar was used to fabricate the narrow unit, with all of the mounting points incorporated into the design.

Now his guys could surround the bike and get stuck in, laying down wire and welding rod to form a 3D model on the bike itself from which to work. The parts on the bike are high-tech, but the fabrication is all old school, with a tree stump and hammer used to bash and shape the aluminium.

The entire body is made this way, all while sitting on the ground and sweating it out in the intense Indonesian heat. Form and function collide on just about every component, with the neat tailpiece separating into two, to allow for a passenger, while the side covers help to channel air onto the radiator.

The fuel tank cover shows just how talented the team are when working with aluminium, while that front fairing has a small touch of everything, from a Michael Jordan tribute to MotoGP-inspired winglets. Even the tiny windshield is made from the boy’s favourite metal and the use of a keylock on one custom cover allows for instant access to the bike’s brains.

This proves to be vitally important, as the loom is kept simple and lightweight with the use of a smart module and a host of LED lighting, and being a fuel-injected bike, there is an ECU and associated hardware to be hidden away too.

That injection system is given a pep-up with a reprogram and the famous Kawasaki twin that has powered so many to lightweight wins at the Isle of Man TT, is given a full custom exhaust system; a stainless 2-1-2 setup to extract maximum power. A big volume alloy radiator helps to keep things cool and a larger remote reservoir has also been added.

To complete the package the bike was torn down and much of the raw aluminium was given a brushed look, while the custom tins have been hit with a combination of Candy Red, Dark Grey and Champagne Gold for a hell of a striking finish. And right on cue, the client came to collect his absolute dream machine, just one of many wishes that the boys of Batakastem make come true