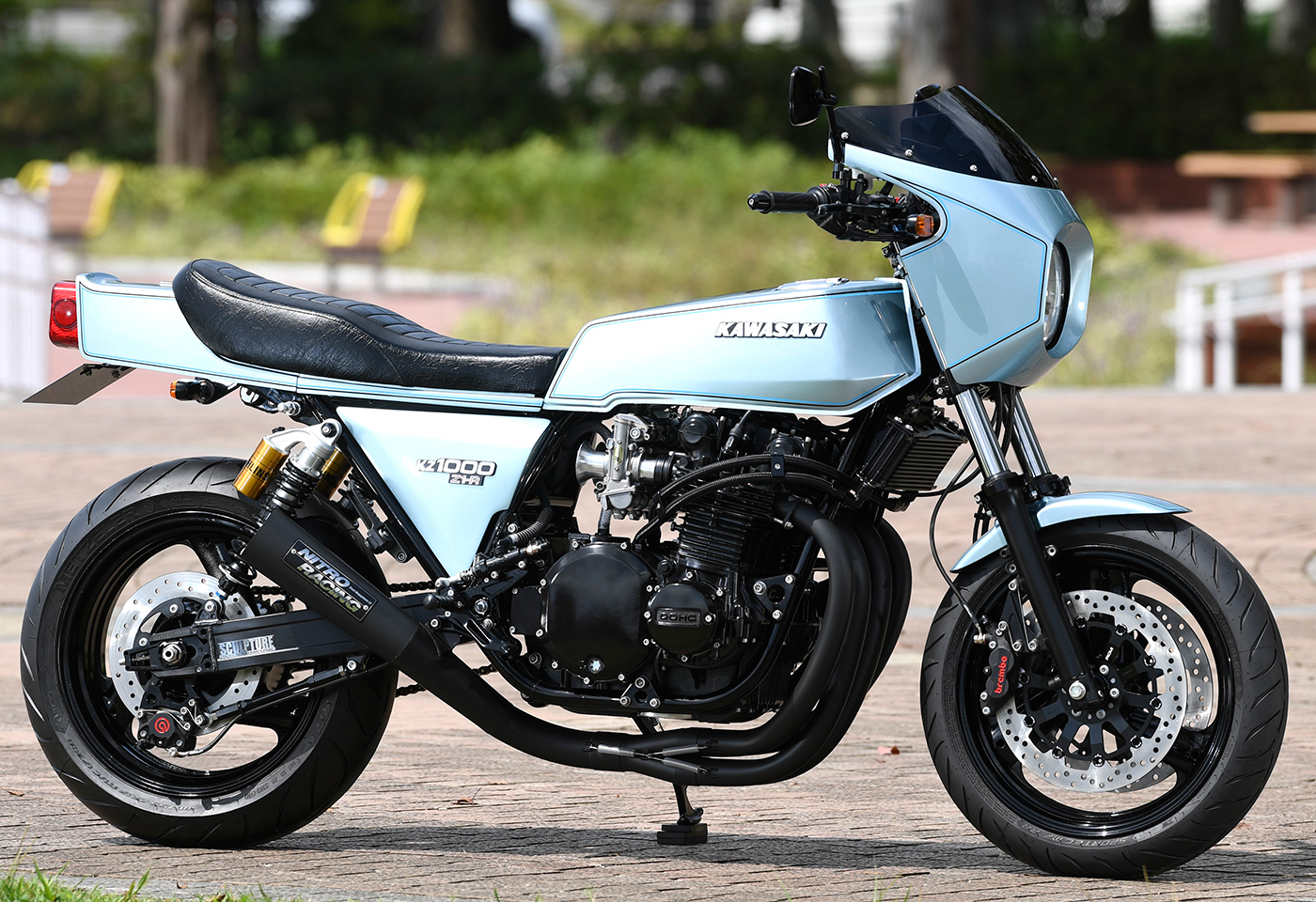 You can have all the money in the world and seek out motorcycle royalty, but that still won’t give you the bike of your dreams if you can’t find the needle in the haystack. The last time we checked in with Hiroyuki Nakamura, founder of Japan’s legendary outfit AC Sanctuary, he told us demand for resto-mod Kawasaki Zs was so high that he’d filled his storage unit with donors for upcoming builds. Then a customer had a request, a Z that he didn’t have and couldn’t find at a reasonable price anywhere in his home country. So first from across the seas, and then with the love of AC, comes this fully restored and tastefully modified Kawasaki Z1-R, RCM-564.

The argument about which motorcycle was the first true superbike will rage forever, most settle on the Honda CB750, some like to go back to the Vincent Black Shadow, and there is a case for the vintage masterpiece that is the Brough Superior SS100. But if you look back through two-wheeled history then the first motorcycle to feature a litre engine, fairings, twin drilled front disc brakes, and instruments that told you everything, it’s the Z1-R. With only 3000 produced and most sent to North America or Europe, where Kawasaki believed the big power would be suited to those continent’s wide-open spaces, Nakamura-san had a problem.

He simply couldn’t find a donor bike in Japan, the Z1-Rs that were for sale were either numbers matching machines with enormous asking prices or in such a state that it wasn’t worth bothering. Thankfully his customer was in good hands, as a long search turned up a decent example in the US that could be shipped over. The catch was that the engine had been replaced with the detuned KZ version of the four-banger. Not a problem, as the owner was happy, the price was lower, and the engine would be rebuilt anyway. Nakamura-san tells us that for the builds he does, he’s not at all concerned about the numbers matching.

So, to commence the rebuild the team at AC started where the major criticism of the original Z1-R lay – the less than stiff chassis. With the frame in the jig, extra bracing was welded into the backbone, swingarm pivot point, and most crucially around the neck for improved steering feel. Then it was time for a nip and tuck of the subframe, and a full covering of black powder coat. Although this build called for a relatively stock appearance, the swingarm of the original just cannot compete with the beautiful wide alloy Sculpture unit that always gets slotted in on any AC build.

But it will be a while before you notice it because the rest of the looks are kept very 1979 and the bodywork is simply flawless. It certainly didn’t arrive that way, having done two crossings of the Pacific Ocean and entered middle-age, the tins required a lot of elbow grease. The stock tank is one of the most distinctive of the era, its square lines and broad shoulders give the Z1-R an imposing presence. The tail section carries that through to the rear and the side covers have been shaped to be arrow straight. Finally, that wind-blocking front fairing brings it all together, and only the fender is from 2022.

With the rest of the bike in pieces the tins could be sprayed the one and only factory colour of the original, metallic stardust silver, only with a little extra pop from the latest in gloss finishings. The use of a factory-style seat covering over the generously padded throne completes the classic look. But for performance, time wouldn’t stand still, so for the best of both worlds, the front forks look like traditional pieces, and yet slide in through a set of custom CNC machined triple clamps and feature the best of internals. Out at the rear, a set of Ohlins connects the new swingarm and braking is Brembo at both ends.

Now the big four-cylinder engine could come in for a makeover and hidden behind the largely factory appearance is a torque pumping brute. The cylinders have been honed and taken out 2mm over stock, before being filled with high comp forged pistons from Italian firm Pistal. The cylinder head has been completely rebuilt, having been skimmed, given newly cut valve seats, and filled with PAMS HF valves. Interestingly enough, the stock cam remains for a smooth idle, but the intake roar is still a thrill with a bank of Mikuni TMR36 carbs tuned to suit. With the whole package being kept cool thanks to an upgrade from Nitro Racing.

The hydraulic clutch is made possible with a conversion based on a Nissin pump and a genuine Z1000 police pursuit bike cover, and it wouldn’t be an AC Sanctuary bike without a full exhaust system from Nitro Racing. The rims come from a modern XJR Yamaha to add some extra meat in the rubber department, and this along with the swingarm conversion meant the chain alignment had to be refined with custom shims, some extra machining, and an offset front sprocket. The commitment to perfection is clear to see and evident by a full nut and bolt replacement with Chromoly items.

For Nakamura-san though it’s just another day at the office in his illustrious career, for the owner however, it’s Kawasaki Nirvana and a lifelong dream to own ’70s superbike perfection.