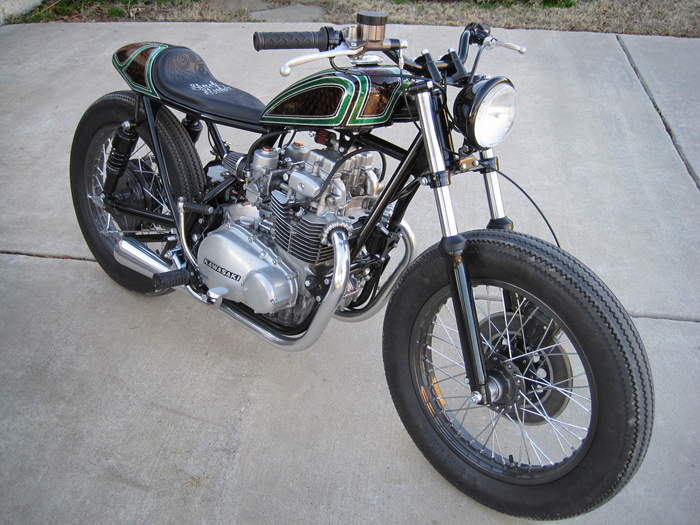 “The customer is always right.” We’ve all heard the saying. It’s based on the thought that if a company really wants to get ahead, they need to listen closely to what their customers want. Most of the time you dredge it up when your stuck in a tricky situation dealing with an airline hostess or rental car attendant. You know the feeling; you just want that second damn bag of tiny little peanuts and it just so happens that no, you don’t care so much about the one-small-bag-of-nutty-snacks-per-passenger-rule thank you very much. So when a good customer of Maindrive Cycles in Texas asked them to build a street tracker using a Japanese bike, they needed a little convincing before they started. You see, Cory Hebert from Maindrive specialises in good ol’ American bikes, and had never built a Japanese bike before.

Andy Hines (the customer) wanted something unique and one of a kind to reflect his individual style — he wears a suit to work… a full body suit tattoo. “Andy, really digs Japanese bikes for their light weight, reliability, and overall ease of riding” Cory says. “He knew that I did custom motorcycle fabrication — typically for American customs — but wasn’t sure if I would take on a foreign build. It took a little bit of convincing on his part, but he finally talked me into it… and I’m glad he did. Andy had a pretty good idea of what he wanted in his head, so it was just a matter of me executing his vision, and adding whatever influence I could as it progressed.”

The custom tail section is what Cory is most proud of on the bike. “I looked at a few pics of other tails, and they all seemed so ‘generic’ to me” he says. “I knew a ‘bolt-on’ tail wasn’t gonna cut it, so I got busy hand forming the tail from steel, so it would truly be an integral part of the bike. The underside of the tail also provided a great spot to stuff some of the electrics, too. I also found a smaller battery that had similar power specs to the stock unit, so I built a box for it, and mounted the remaining electrical components to it.”

Andy spent a lot of time cleaning up the motor and getting it to look like new. He also had every nut, bolt, and washer re-plated, and got all the remaining parts powdercoated to his liking – which made it a lot easier for Cory. “This being my first Jap build, I was REALLY surprised as to how many parts actually make up these deceptively simple-looking machines. It seemed like I had a million parts laid out on my garage floor!”

The tank and tail section were given to Scott Hoepker from The Backstreet Bucket who did the killer paint job.  “Getting the motor back into that freshly-painted frame was a total pain” says Cory. Finally the black leather seat was crafted by HardLuck Designs – the name ‘Slack Stealer’ came from Andy’s son. “It’s a phrase I overheard my son using. He and his older brother were fighting over a blanket while watching TV. The younger one yelled, ‘Gimme some slack, you ol’ slack stealer!’ My wife and I looked at each other and started laughing, and it came to me: ‘That’s the name of my bike.’ My son takes credit for it at every opportunity.”

After completing this Kwaka there was only one thing left to do, take it for a ride. “Honestly, I couldn’t believe how much fun this bike is to ride” he says. “It really opened my eyes to a whole other world of motorcycling. I’m actually looking to build one for myself now!”

You can also check out the complete build pics on Cory’s Flickr page.