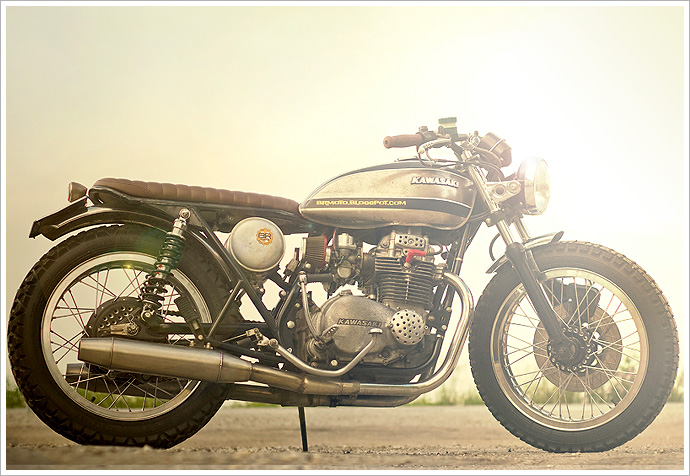 Ok, let’s not beat around the bush. There’s an elephant in this custom bike room and we’ll need to get it out in open right now. I haven’t got the slightest idea what a “bolo shit” is. I’ve Googled. I’ve Bing’d, why I even tried an Alta Vista search by travelling back in time. Nada. Now according to the always amusing urbandictionary.com, a “bolo” is a itself a term for pooping, so that would make it’s name “shit shit” which, while quite funny, doesn’t make any sense at all. Then I saw the gun on the tank. Bingo. Another Google search of “bolo gun” tells me that bolo is a nickname for the Mauser C96, better known as “the gun that the Nazis always have in war films.” Except that the gun on the tank looks nothing like C96. So where does that leave us? I’d suggest we just all don these here special glasses that make white elephants invisible to the human eye and click that “read more” link below. OK, enough jokes. The bike is out of a shop located in Bologna, Italy that goes by the name of BR Moto. They’ve earned themselves quite the reputation for custom magic and as you can see this one is no exception. And when you realise that it’s the bike owned by Matteo Mussi, the man behind BR, you’ll understand why no stone has been left unturned or hole undrilled as the case may be. Matteo’s mother tongue (sound rude – happy Aussie mother’s day to you all, by the way) isn’t English, so info on this bike is about as scarce as the similarly rusty Yamaha XT 500 we featured last week, but you’ll notice the dirt tires (something that’s become a bit of an unintentional theme on recent Pipeburn posts) along with some very skilled stripping of any necessary bits and pieces and a nice seat replacement to streamline and further minimise the overall looks. Matteo was looking for a fair weather workhorse that he didn’t have to worry about babying or taking off of the ass felt asphalt but at the same time he was looking to have something a little fang-able. The result is the holy, be-stickered, rusty work of art your peepers are currently fixated on. Fun? You’d be hard pressed to have more fun than this at the opening night of the Sex Addicted Fashion Model And Champagne Swilling Association’s annual general meeting. Hic. Front and rear rims are ala Borrani, with a Metzeler on the back and a Heidenau on the front. No – I’d never heard of them either. Pipes and mufflers are a one-offs from Matteo’s own shop, and sources with their ears close to the bike’s hyrocarbon back bottom burps report that the sound is pretty damn ballsy and give the bike a deceptively large-capacity burble. Want. The bike, that is. Not the bottom burps. (via the Wide Open Moto Blog)