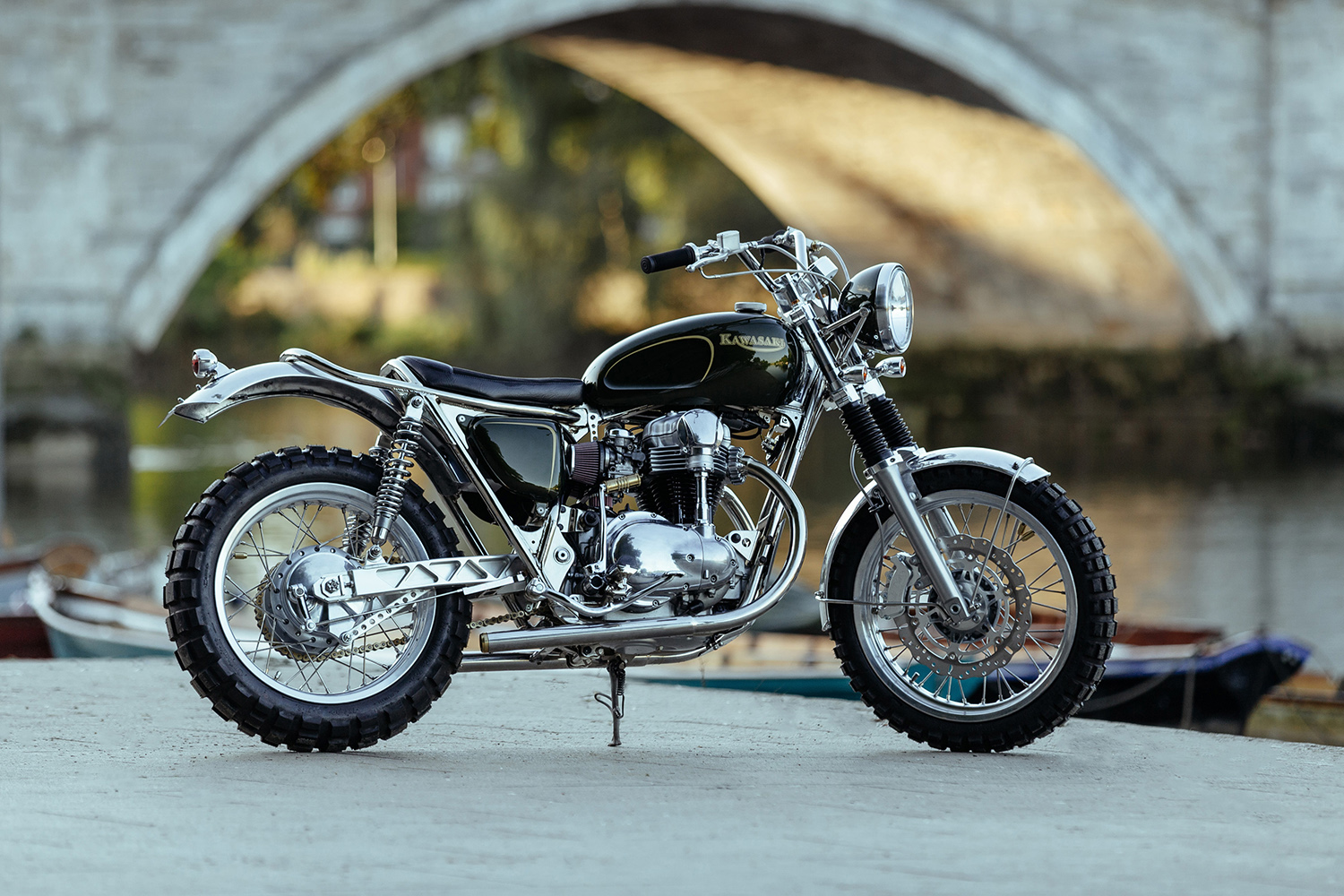 Take yourself back to the 1960s, the TV is tuned in to the BBC, Murray Walker is in the commentary box hyped up and ready to go, and the engines rev on the start line. No, they’re not about to start the F1 at Silverstone, this was how Scrambles racing was broadcast to the world. It’s almost impossible to imagine such coverage these days, but all has certainly not been lost as the inspiration of those glory days lives on. There is no doubt that the Kawasaki W range was built to capture the best of British from that period, and having already built one incredible W, Rick Hannah of London’s Dirty Dick’s Motos is back with another sensational scrambler.

His debut W was as good as a build gets, so Rick had to plot a careful path forward to make sure the bike wasn’t a one-hit-wonder. Do something completely different, build the same bike all over again, or go for a third option, “The harder path is always going to be to take what you’ve built, keep what works the best, and try to improve what you’ve already done. This has always been my way of doing things – cars, bikes, houses, you name it, everything can be Better, Faster, More! The Japanese call it Kaizen, The Art of Continuous Improvement, and with this in mind I set about building the next Sled,” he explains.

To start the project, Rick found a W650 that was a good price, with one little issue, it didn’t run. Turns out someone had botched a tank lining job and the result was the carbs were completely blocked up with gunk. Not to worry, as the engine would be thoroughly rebuilt anyway. So, the bike was pulled down to every last nut and bolt, and the rear end of the subframe was given a hooped look as opposed to the luggage rack on the last build. “This time around I wanted a cleaner and smoother look to the bike, so went more traditional. The frame was then polished to a mirror finish and then sent for nickel plating along with a bag of smaller parts.”

If the frame looks good, it’s only perhaps bettered by that sweet all billet machined swingarm, that alone is worth the price of entry. To control the new rear end, Rick had a custom set of Hagon shocks made up with billet tops, that are fully adjustable. The front end is no different, with the stock forks filled up with Andreani cartridge kits that allow for full adjustability of rebound, preload, and compression. The lower legs have been brushed to give a nice raw finish and then a DDM’s brace was added to stiffen it all up.

“The wheels had the hubs blasted and powder coated in silver. They were then re-spoked with fat Morad rims in 19×3.00 and 18×4.25 respectively, and wrapped in Continental TKC80s. This time though I have gone a bit fatter on the back with a 150/70/18R tyre. Although I have built this bike to look like a more traditional late ‘60s Sled, I still wanted it to be a little aggressive.” And there is nothing wrong with those sorts of upgrades, the brakes getting the extra-large treatment too, with a DDM Big Brake Kit, consisting of a 320mm EBC disc and 6-pot caliper.

Turning his attention to the looks, Rick cleaned out the fuel tank and then got to work removing the cheap and ugly looking stamped seams that all modern tanks come with. Then the knee pads and big badges were removed and the remaining holes filled before the entire piece was perfectly seam welded back together. Up top, the fuel filler has also been patched from the standard location and a Harley fuel filler and Motone billet cap look sensational. As for the paint, wow, “While it’s a deep green in the shade, barely highlighting the gold accents, as soon as the light hits it, the paint explodes with multi-layered gold flakes in the green.”

The rest of the aesthetics are just as pleasing to the eye, with a classy twin material seat in black stitched together flawlessly. Little touches like the stainless headlight bracket ensure that no area of the bike doesn’t look picture perfect. With the generous fenders on custom mounts, looking the business and taken straight from ’60s scrambles central casting. To keep the clean look completely uninterrupted, the wiring has been brilliantly sorted and Rick even went so far as to run the wires from the switchgear through the inside of the 1” Western bars.

“The stainless-steel exhausts follow a more traditional shape, but has been gratuitously curved to follow a similar shape as the front mudguard and headlight. This symmetry in shapes always makes a big difference to the overall appearance of a build. To make this bike a bit sleeker than the last build, there are no engine bars, no high-level pipes and no luggage rack. A simple and elegantly made stainless steel bash plate at the front emphasises the curves on the exhausts.”

Any fears of being a one hit wonder can be shoved aside, as it’s back to number one with a bullet for DDM, and Murray Walker can once again state, “I can’t believe what’s happening visually, in front of my eyes.”