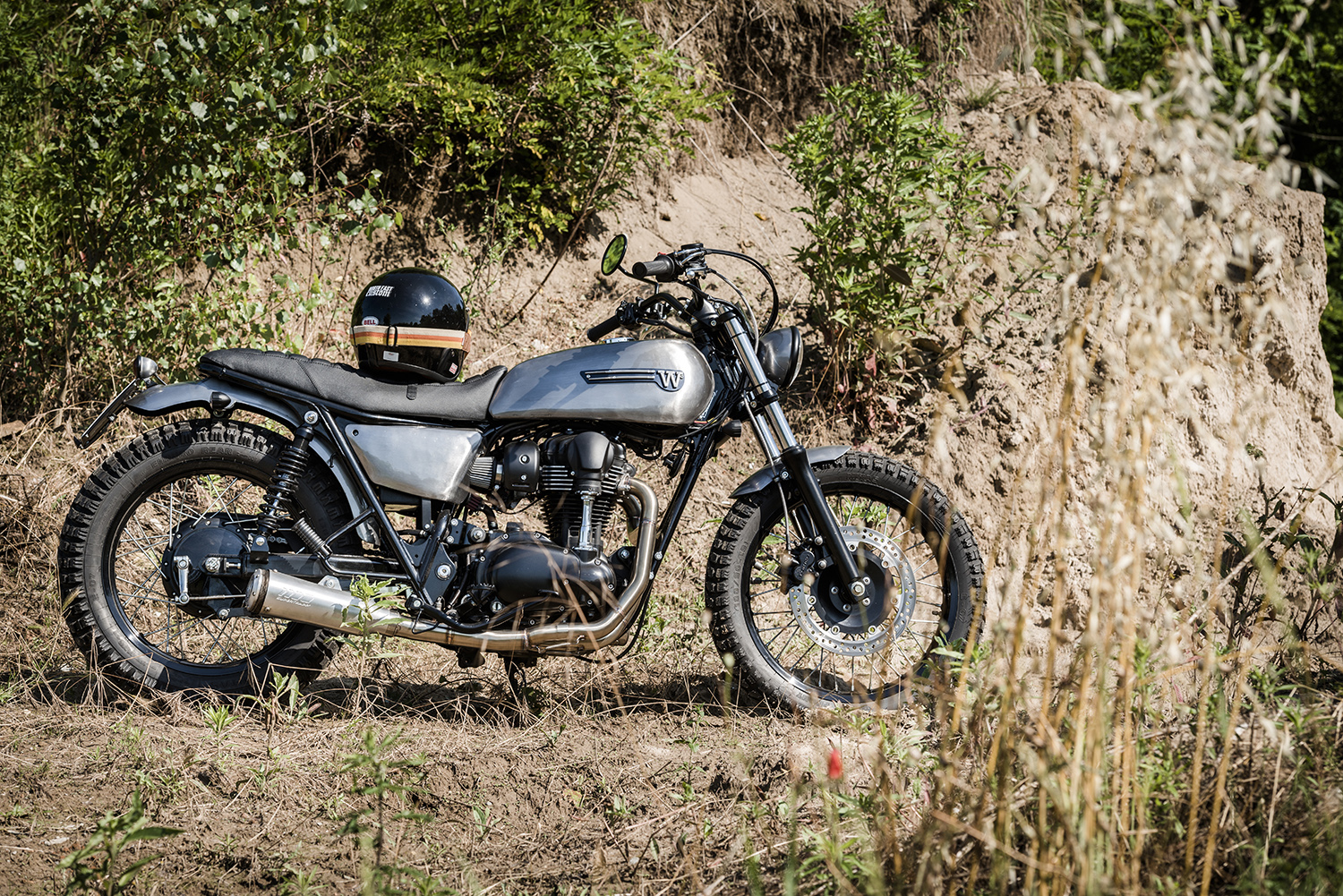 For 365 days of the year, we feature the greatest custom built bikes the world has to offer and bring to you the best side of the scene. But, if you’ve been riding motorcycles long enough you know that eventually, that thing we try not to talk about, will happen; an accident. With modern riding gear, ABS and traction control, you might just get away with it, but most of us have broken at least one bone riding two wheels. Which is how the owner of this Kawasaki W800 came to be at the door of Italy’s North East Custom. With a busted bike, broken leg, and some surgical metal in his hand, all of which has been reborn into this beautiful custom, so he can ride in style once again.

Talking to the head honcho at North East, Diego Coppiello, we got the rundown on exactly what had happened and how the owner had ended up at his workshop. The Kawasaki W800, the Japanese company’s modern-retro interpretation of a ’60s British twin, had been the pride and joy of his client. Then on one unfortunate day, he had a big accident that not only smashed the bike to pieces but did the same to his body. The wrecked W sat in the corner of his garage for a few years, while he healed up with some metal to hold his shattered leg in one piece.

Fast forward a few years and the owner decided it was time to get back on the horse. And turned up at North East with the totaled bike and a handful of surgical steel pieces that had once been inside him. The request was simple, rebuild the bike and make it lower to accommodate the injury, and find a way to work that once limb embedded steel, into the design. So now Diego could tear into the bike and it was a matter of sorting out which parts were still ok to use, which could be saved and what he’d either have to replace or build from scratch.

The first step was to take the bent frame and ensure he had it laser-straight once again, even a few mm off can result in a terrible ride. Then the rear subframe was cut back and a new hoop of steel welded in before the whole chassis and swingarm could be recoated in its factory black finish. Over the top of the old subframe, a new seat base was crafted, with a new electrics box below to keep the wires and accessories well hidden. Then the seat unit itself was built up with a generous amount of foam, designed for two-up riding, and covered in a perfectly finished black leather.

The bodywork is all handmade in-house, starting with the amazing gas tank that transforms the look of the bike away from that round bubble-type appearance of the stock Kwaka, to something more Italian, almost Ducati-esque. Into the top of the tank, Diego worked in a new custom speedo unit that also houses the idiot lights and a small digital display. To give it even more of a custom look the bare metal is given some colour across the top. And then it was time to get surgical at North East, with the metal from the owner’s leg fashioned into a custom set of badges.

The neat metalwork continues with the factory plastic side covers scrapped for some more hand-beaten pieces in a raw finish. With the front and rear fenders fashioned in the same manner, that gives the bike a unique, artisan vibe. A Bates style headlight has been fitted to the front, with the bucket given the raw metal finish, and a vintage taillight given the same treatment. Even the front cowl where the big twin gauge instrument cluster once sat, is hand-formed raw metal and Diego is a master of giving a motorcycle a cohesive feel.

With the bike having taken a serious hit in the accident, new front forks were required, and slotted into the triple trees a few inches lower, was the first step at getting the bike more comfortable for the owner. The rear uses a set of adjustable, blacked-out shocks, that are shorter in overall length than the stock units to complete the drop. The factory hubs have been retained and are re-laced to a set of lightweight rims, that have then been wrapped in a set of dual sport rubber.

The 800cc twin doesn’t miss out either, having been given a visual make-over to have it looking like new. A set of twin pod filters fits perfectly in behind the handmade side covers, with a crankcase breather below. Before the welder was once again fired into life and an all-new stainless two into one exhaust was built, that barks out of a SuperTrapp muffler. The rest of the bike has been finished out with quality bars and levers, stainless steel brake lines and a full new set of custom indicators to complete the look.

Having been thrown from the beast in anger and with the injuries to show for it, the owner is now ready to show whose boss to a bike they call ‘Matador’. Now carrying the evidence of his wounds on his fuel tank, it sends a powerful message that he may have been knocked down and broken, but he can never be stopped.