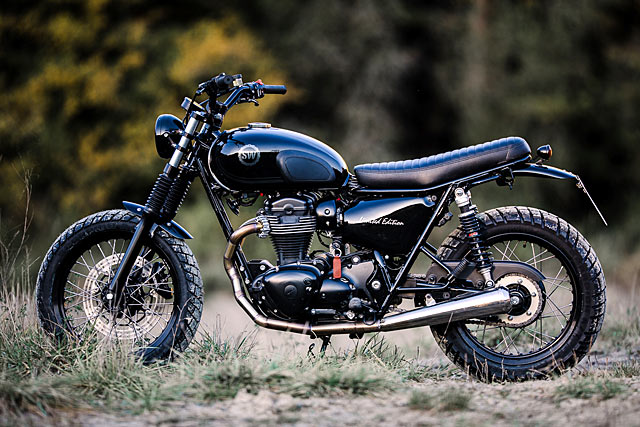 It’s been a big week for Kawasaki retro remake fans with the release of the Z900rs in Tokyo to pay homage to the legendary Z1 of the ‘70s. But it seems that what one hand giveth the other taketh away, as Team Green hammered home the final nail in the W series retro rides coffin. One of the first modern bikes to be built with a classic look, the twenty-year production run is finally over. But so long as useable items can be found in salvageable condition, then Germany’s Schlachtwerk proprietor Tommy Thöring will make customs of them all. His latest is a 2012 W800 Special Edition that’s blacker than the ace of spades for an owner who is just as lucky. The Schlachtwerk name has become synonymous with two things, Tommy’s lime green Yamaha TR1 drag weapon and his endless run of slick Kawasaki W series builds. The owner of this particular machine had seen many of Tommy’s bikes online and so headed for the Offenbach based workshop to pick up a rear fender for his W800. But seeing a custom bike in the flesh gives that “I must have one” feeling that an online picture can never match. So instead of just the fairing he came back with the 2012 Special Edition for the full Tommy special. The build however was slightly different to many of the Kawasaki’s that Schlachtwerk have tackled in recent years. With the bike’s odometer reading just 4200 km and being in immaculate condition, a frame off rebuild didn’t seem to make much sense. Instead the owner requested the 800 be infused with Schlachtwerk DNA because as Tommy will tell you, “all my W’s are really nice bikes for daily use and weekend fun, they are built for use, not for show,” which is exactly what the owner was after.

The first step was to get the bodywork just right, which for Tommy means putting a W on a diet and stripping back all the oversized fenders. The subframe has been tidied up in anticipation and the cut parts of the frame refreshed in chassis black paint. The fenders are Schlachtwerk items front and rear, considerably smaller than stock but still more than enough to keep the stones at bay. The side covers are also built in house and take on a more modern feel to the stock items that appear to be direct Bonneville copies. The tanks factory knee pads remain but have been flush fitted for a slimmer profile and then it was time to get out the paint gun. Black, black and more black just as the owner had requested with gloss laid down on the tank and side covers, a slightly more satin finish used on other surfaces and heat proof product on the engine. Tommy also reapplied the limited-edition decal on the side covers and painted the workshop logo where the Kawasaki badge once called home in graphic matching silver. The look is finished out with a two-up seat, black leather and a classic stitching fulfilling the theme. The appearance is all about remaining understated and truly capturing the retro feel that the W bikes have always been known for. But what is less obvious is just how much work has gone into making this bike ride anything like an old steed. The first thing to come in for an overhaul was the suspension with the factory forks gutted and rebuilt using high-end Wilbers parts. Everything from spring rate and fluid have been selected to match the final weight of the bike with rider on board. To further improve the front end feel the triple trees are CNC machined and clamp the factory stanchions across a wider surface. The rear end hasn’t been left to chance either with the measurements taken and calculations done Tommy selected a set of fully adjustable 360mm YSS shocks. Reducing unsprung weight is the factory fitted for the special edition lightweight wheels, but these came from the factory anodised gold. Now blacked out they’ve been re-laced, with 18 inch Pirelli rubber measuring 110 in the front and 150 in the rear fitted up. But not only does the W800 handle like it’s on rails it stops in a hurry too with Tommy cleverly adapting a 4 piston Berringer front brake clamping 320mm disc. If there is a valid criticism of the W800 it’s that the fairly sizeable twin only produces 40 odd horsepower; but being the drag strip king he is the Schlachtwerk boss knows a thing or two about extracting extra ponies. The first step was to hand fabricate the beautiful stainless steel two into one exhaust that vents out the left side via a single megaphone muffler. A problem with the throttle bodies was limiting power but once he had them fixed Tommy fitted them up with K&N filters.

Finally, a Power Commander V was wired in and considerable time spent on the dyno until 60+hp was returned. The 25% increase in power is just one part of the equation with the power to weight ratio greatly improved over stock thanks to the builds diet shedding 30 kg of excess baggage. More power, less weight and greatly improved braking power meant feel at the lever was vital, with a Maguro HC1 12mm master cylinder taking care of business. This is fitted up to an LSL tracker bar and riser combo with adjustable levers further improving the fine tuning. The lighting is all new front and rear but retains the classic look while nothing says retro style like the gorgeous Motogadget chronoclassic speedo. It’s the one part that truly exemplifies the entire build, classic looks with precision modern performance; if only Kawasaki built the W like Tommy at Schlachtwerk perhaps they could have lived on forever.