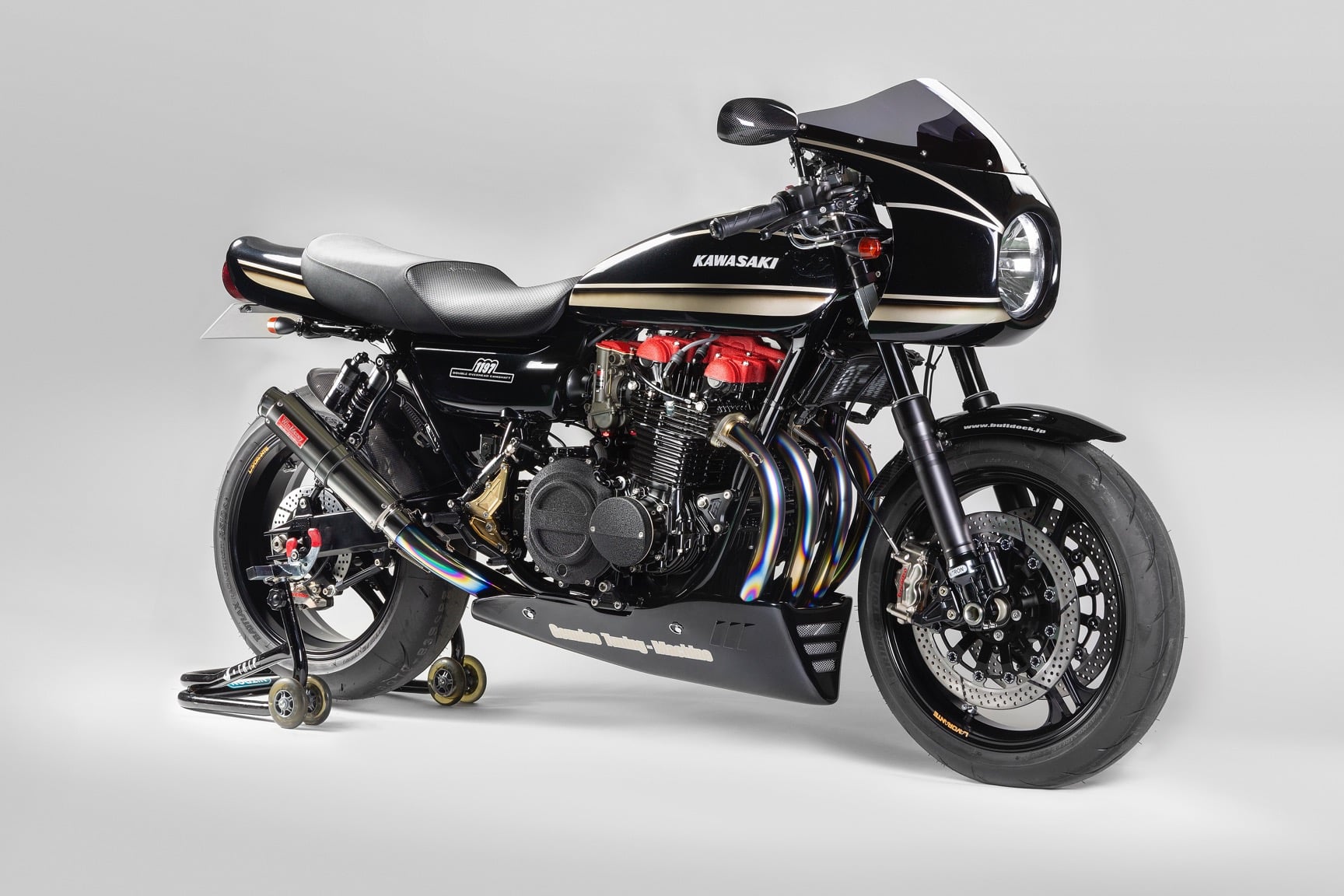 Buying a car or a motorcycle from a dealer can be a painful experience, you sometimes get the feeling that not even the salesman believes in the product, but he’ll do his absolute best to make sure you don’t go anywhere else to buy. Japanese outfit Bull Dock has the completely opposite approach, they encourage their clients to go and look at both new motorcycles and those at other custom workshops before considering one of their own hand-built machines. It’s not because they’re arrogant, they simply believe absolutely in the incredible quality of their work. Enter exhibit A, a truly stunning Kawasaki Z1 that visited their shop in Tochigi Prefecture, and left a little later, literally perfect.

Like their fellow Japanese powerhouse, AC Sanctuary, Bull Dock has made its name crafting the world’s best resto-mod Kawasaki Zs and they have their own line of parts that are made in-house. In addition to those off-the-shelf parts to dress up your Kwaka or give it a little extra poke, they also have a second in-house brand McCoy, that is about producing a line of products to be used on a motorcycle where expense takes a back seat to the pursuit of perfection. These pieces all go through an incredible level of R&D and are simply as good a product as you will find anywhere in the world.

Many of these fantastic parts end up being used on the company’s GT-M bikes (Genuine Tuning Machine), Mr. Wakui, the owner of the shop thinks of the GT-M as “fully hand-crafted, but with a natural appearance”. Basically, the lines and general look of the Z1 are retained, but absolutely everything else is rebuilt or replaced until they have given their customer a dream of a motorcycle. And the measures to which they go are extreme, take the chassis for example, it was never meant to deal with this level of power or grip and the original equipment was tall skinny tires.

So the entire frame, from the headstock to the pivot point for the swingarm are modified, not only to suit a change to 17in rims front and rear, but to also add the necessary strength and rigidity to cope with the extra demands. Now the bolt-on modifications can begin and one of the company’s in-house McCoy swingarms is slotted in and provides excellent feedback to the rider as to exactly what the rear tyre is doing. At the front end a set of McCoy triple clamps and a custom stem to control the offset go in, and that three-bolt lower is as beefy as they come.

Next, it’s time for the suspension and to show just how seriously Bull Dock takes the handling of their bikes, they have worked with UK manufacturer Nitron to develop a complete Z1 solution. Through the triple trees go a set of Nitron fully adjustable forks, with a lower external reservoir to prevent overheating, and a Hyperpro horizontal steering damper is added to stop any big tank slappers. The rear end gets a set of twin adjustable shocks and they’re joined by an underslung Brembo caliper with a Sunstar disc. The pointy end is CNC Brembo radial calipers and McCoy discs.

The wheels form a big part of the bike’s look, but they also offer increased performance being lightweight forged alloy to reduce unsprung weight and to help counteract the gyroscopic effect, so of course, they too are made in-house as part of the company’s LAVORANTE range. All of the bodywork is from the McCoy range, from the ultra-cool bikini fairing with its tinted screen, to the slick lightweight tail section and belly pan, the full carbon fibre front fender and rear hugger and even the re-production gas tank and side covers. “At the time of the vehicle production meeting, the customer said, ‘I want to go with black,’ and he suggested a paint called Ice Pearl. It makes the black look better,” smiles Mr. Wakui.

The seat is an off-the-shelf McCoy two-up unit, that’s been beautifully finished in perforated faux leather and a suede-like material. And with the engine in this bad boy, you’ll want a lot of seat time. The block is dipped and then bored and machined for the modifications to come, which include new Pistal forged pistons to take the capacity out to a massive 1197cc. The head is flowed and the ports opened up to take maximum advantage of the Yoshi cam and springs. Also inside is a complete McCoy six-speed gear set, with stronger gears and forks and the ratios maximised to take advantage of all of that power.

On the outside of the engine is a host of dress-up parts, a thumping set of Yoshi TMR-MJN 36mm carbs and because the Bull Dock boys can do it all, one of their own picture-perfect titanium full exhaust systems. The client benefits from a set of clip-ons and CNC’d rearsets to suit their dimensions and riding style, and with a hydraulic clutch conversion, both master cylinders are from Brembo. A custom carbon dash finishes out the build with a mini-speedo, Stack rev counter and the ignition relocated. The silhouette still very much retains the timeless, beautiful, Z1 lines. But the mechanical package of this Bull Dock beast will give anything a run for its money and the lust levels are simply off the charts!