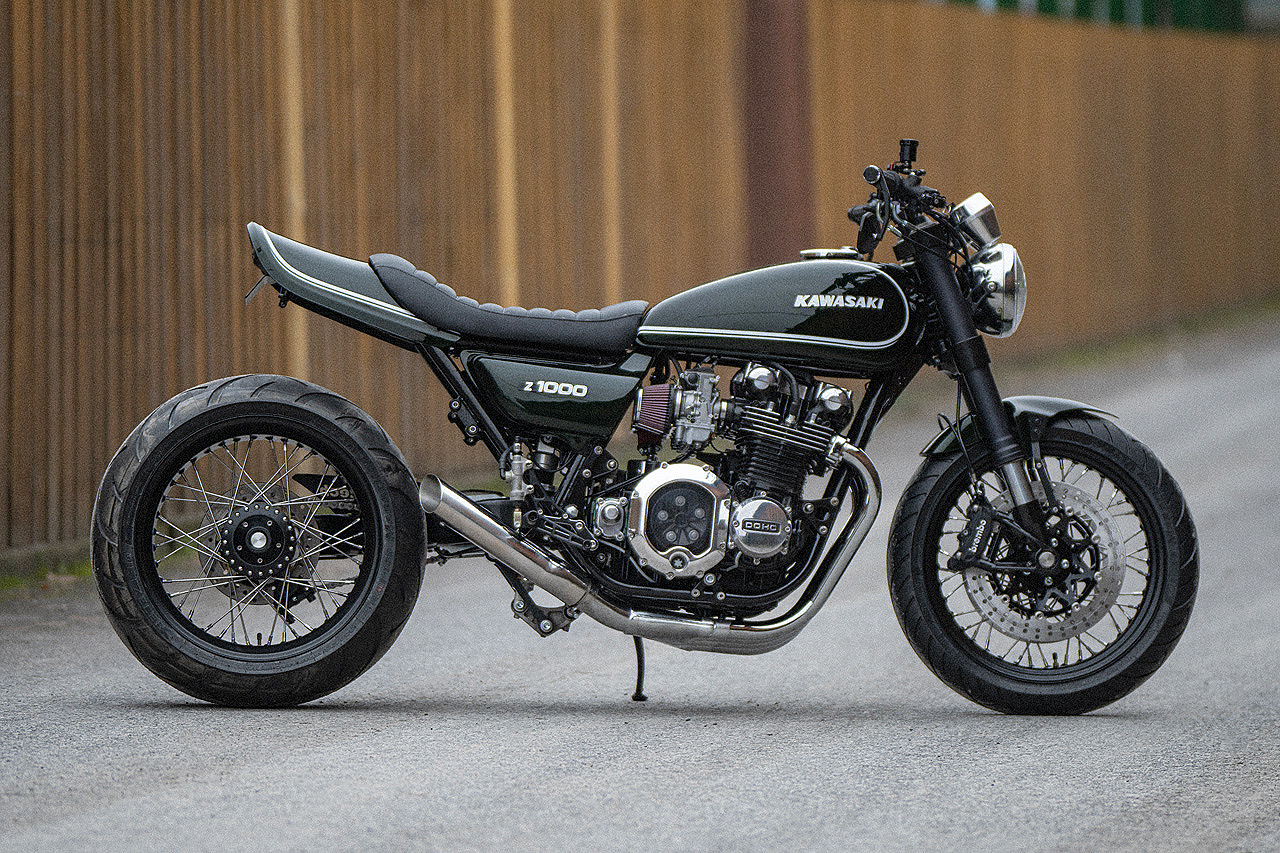 It all happened around the same time, and those who were there for it all will look back and remember it with a smile. In both the car and bike scene of the late ’90s and into the next decade, the wheel and tyre packages just got bigger and bigger. Times changed, tastes moved on and yet now we are coming back full circle, as some are using the engineering tricks of those times to incorporate the bold and beefy look into machines that are all about flexing their muscle. Germany’s RF Biketech are one such player and having been in the game since ’97, they know all the tricks in the book. Which is how they’ve taken an old Kawasaki Z1000 and turned it into an absolute Bavarian beast with more rubber than an adult movie set.

Already I can see the purists pulling their hair out, and that’s ok, the custom scene isn’t here to please everyone and we all have our own way of doing things. There is a right way to do certain things, carb jetting is a precise science, but in many other areas it is anything goes, and if the owner is happy, then it’s mission accomplished. I was one of those tarts with 19in rims on my JDM car and always trying to squeeze bigger rubber on the back of my ZX6, so what I’ve long since known is that as tyre conversions moved from 200 to 240 and on to 300 wide rubber, the engineering knowledge required to achieve the job is of immense proportions.

That RF Biketech can make all of this work on old bikes, that is a testament to their immense skill and it all starts with preparing the chassis for the conversion. Three big factors have to be taken into consideration, chain alignment, shock placement and the strengthening of the swingarm pivot point to not only handle the extra size and weight but to transfer the load through the chassis in a way that ensures rear tyre feedback is felt all the way through to the bars. From a twin shock and 120-section tyre, the brilliantly designed RFB single-sided swingarm kicks things up to a whole new level.

The Z now features an incredible 300/35-18in tyre on a custom spoked wheel completely built in-house at RFB. The centre spindle means the guys can actually shift between varying width wheels and the underslung custom brake packages make changes a breeze. To control the extra weight and demands of such a package, Wilbers custom build a fully adjustable rear shock. At the front, things are no less impressive, with a full USD fork conversion with radial mounted four-piston calipers. A custom set of triple trees makes this possible and all of the brake rotors are from the high-end Braking company.

Although that big booty dominates proceedings, the look is not left completely unbalanced, with a well thought out bodywork package from front to back. At the all-important rear end, the guys have developed a series of their own street fighter like tail sections, with this build getting an upswept take on the traditional Z tail, with two lower LED taillights incorporated into the clean design. The reworked side covers and tank, fit perfectly onto the improved frame and a razor-sharp front fender completes the package. All of which has been covered in a brilliant black by Experience Color and a matching seat stitched up to keep the rider comfortable with all that rubber on board.

The stock engine would no doubt spin that big back tyre, but not with the sort of aggression the guys had in mind, and a muscle bike needs plenty of extra mumbo. To make that a reality, they’ve left no stone unturned in unlocking plenty of potential from the legendary Z engine. The block is pulled down to nothing and blasted before the bores are machined and readied for the REC pistons that help punch the capacity out to 1075cc. A new clutch goes in, essential for handling that extra grip, and is slotted in behind a clear cover, with the rest of the engine blacked out and polished up.

The fuelling is now handled by a full bank of Mikuni RS34 carburettors that are jetted for the combo, before being fitted up with K&N pod filters. On the exhaust side of the engine, the guys build their own, and the Z runs a full 4 into 1 system, with an uber cool machined baffle collar fitted just inside the slash cut tip. To keep the bike firing on all cylinders, you only have to pop a cover to discover the Dyna ignition system, with its own set of coils tucked up out of the way. This all forms part of an entirely new wiring loom to ensure everything operates flawlessly.

One thing that stands out about every RFB build, is the lengths they go to to ensure their clients get the complete package. Take for example the use of the standard dash, which now cleverly incorporates a set of modern Daytona clocks. The controls are a set of their own 850mm bars and the rearsets are brilliantly machined with a contrast cut to match the colour scheme. A host of the best products from Motogadget ensure that all of the little details are taken care of, and then there is one final task before delivery to the customer.

Proving just how incredible their engineering talent is, the RFB team have the bike completely TUV-approved, meaning the boys in blue can only leave you be when you wind up the wick on your big backend beast.