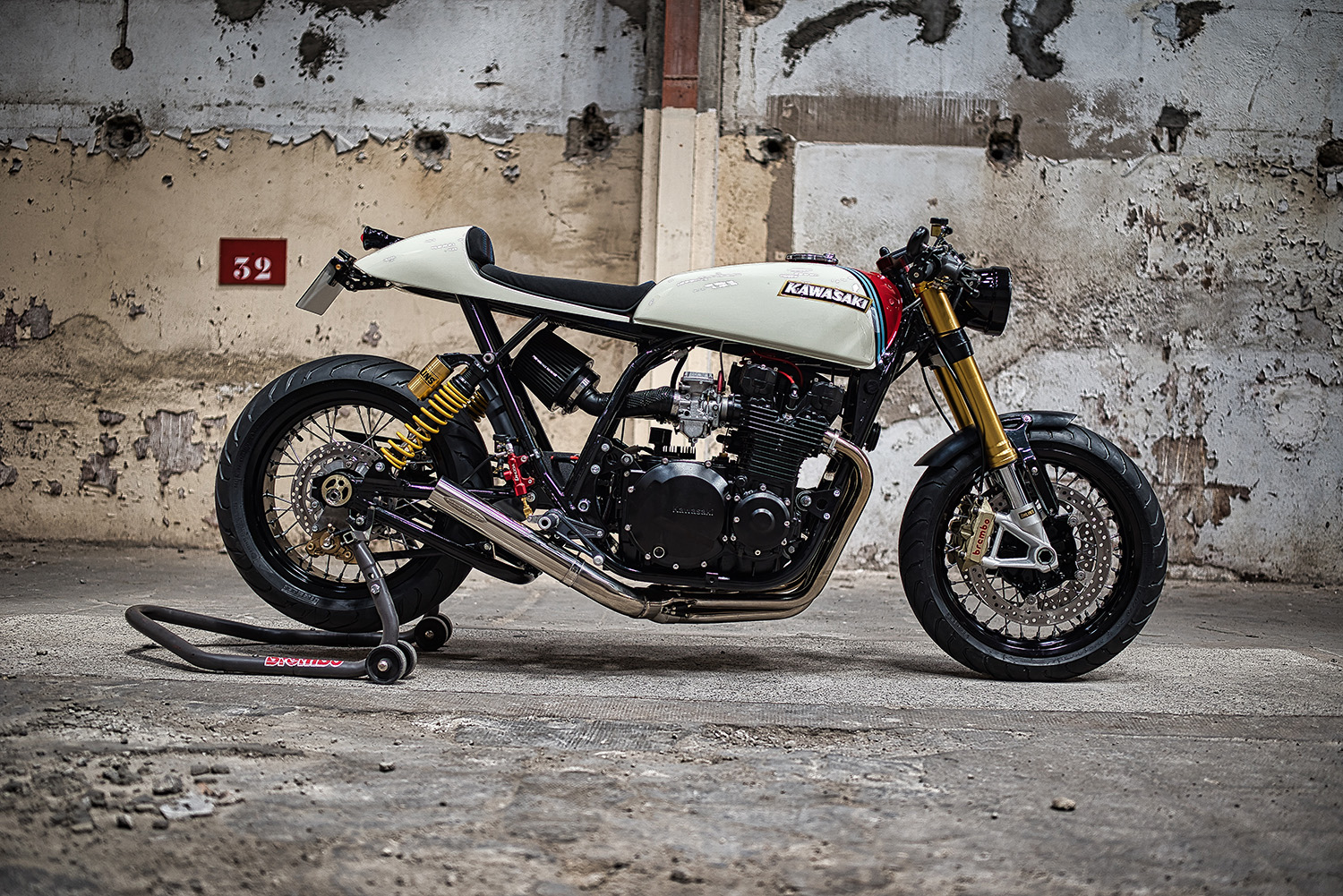 Without a trained eye, you could be forgiven for thinking that many builders of classic bikes simply grab whatever make and model is at the nearest junkyard and get to work. And that does happen a lot, but the wise workshops and builders amongst us know that certain machines received a little extra love before they left the manufacturing plant, and they can take full advantage of those benefits. One such motorcycle is the homologated for Superbike racing, 1981 Kawasaki Z1000J, and the man making the most of the big Z with extra special sauce is France’s Jérémie Duchampt of Jerem Motorcycle.

In 1980 Kawasaki had released a new Z bike with over 1000cc, fuel injection, and 93bhp, at the time this was revolutionary stuff and had motoring journalists calling the ‘H’ designation machine, a ‘hyperbike’. So, when walking into showrooms the following year, most of the public were left scratching their heads at the ‘J’ model, which had reverted back to carburetors, lost cubic capacity, and had seemingly gone back in time. But, as Jérémie knows now, and as wise buyers knew then, the bike had actually lost that capacity to be eligible for World Endurance and other Superbike racing, and the engine and frame had been factory prepared for the job.

Kawasaki had never struggled to make horsepower from their engines, but the frames, well they didn’t call the H2 the ‘widowmaker’ for nothing! So, the J frame might look like any other Z bike from the period, but fatter pipes with thinner wall thickness allowed for a more tuned chassis, and the headstock was finally improved with proper bracing and gussets added so the thing didn’t feel like jelly when steering it hard at speed. The engine, well that too copped an upgrade, the smaller capacity gave the two-valve engine a new ability to rev, and bigger valves and more compression pumped out 102bhp.

Back at Jerem and that big four-cylinder engine was yanked from the frame and given a complete once over, with Jérémie refurbishing and replacing the worn-out parts, giving the whole thing a lick of black paint and building it back up with fresh gaskets and seals. Then he ditched the airbox and made a custom 4 into 1 intake that draws air via a big pod filter below the seat, which is then routed into the re-jetted Mikuni carbs. The factory electronic ignition is relocated and a rewire helps to tidy things up, before a full stainless exhaust system goes on with a DELKEVIC silencer to produce a genuine 110bhp and 100nm of torque.

Part of the process of the build was to ditch any and all excess weight, as the Z tips the scales at 250kg fully fuelled. The stock bodywork hasn’t aged well and with big side covers, and an even bigger tail section, plus a steel based seat, it was all thrown in the bin.

Saving even more pounds is the shortening of the subframe and the reworking of the shock mounts to deliver a far more compact package. Over the top goes a lightweight fibreglass tail section, with an alloy numberplate holder pocking out from underneath. The only other metal work is the replacement tank in the form of a Z650 item that sits on custom mounts.

To dress it all up in Jérémie’s favoured racing style, he had his friend Anthony at A2F lay down the beautiful gloss white paint and Martini graphics, with a matching helmet to finish out the look for the rider. And then it was over to Irina of Point Upholstery 34, who replicated the famous Martini design in the stitching for the custom seat.

The lighting is a mix of old and new to balance the characteristics of the build, with the headlight an LED unit with a custom red insert, and the rear a vintage piece that looks right at home on the cafe racer styled hump.

With good looks and bulk power taken care of, Jérémie turned his attention to making the bike handle much more like a fined tuned modern machine. The factory had fixed the frame, but they’d left the toothpick swingarm in place, and this has been swapped out for an adjustable item from a ZRX1100. To control the back end, a set of Ohlins adjustable shocks get the call-up and the custom rear wheel has been laced up to a rim that’s capable of holding the 180-section rear tyre. The front wheel is built around a BMW hub, with stainless spokes laced up and the right rim selected for a 120 tyre, with both ends protected by a fender and hugger.

The front suspension required some additional thinking, the usual sportbike swap can prove to be too stiffly sprung for an old school frame. Jérémie found the right balance by using a set of USD forks from a BMW R nineT that have been re-valved to suit and dropped through a custom upper triple clamp, and new needle roller bearings for the neck. The braking is all just as impressive, an underslung caliper and drilled disc take care of the frear end, with twin discs and Brembo radial M40 calipers for the front.

A full suite of Motogadget electronics completes the build and Jerem Motorcycles have delivered the ‘80s homologation hyperbike that Kawasaki always promised.