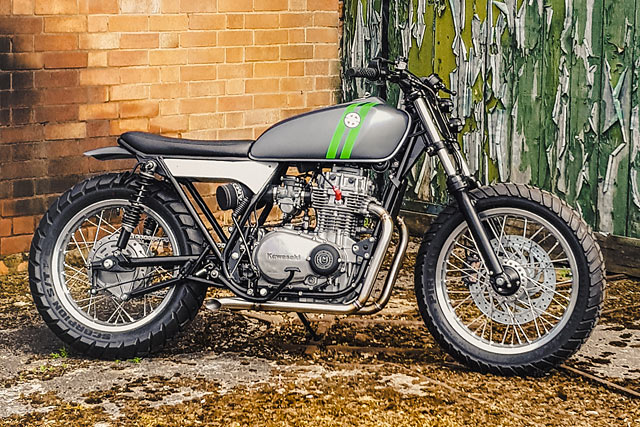 BGM Cafe Racers’ Tonie Wishart is trying to redeem himself. Years ago his father brought a bike home, an old Kawasaki G4TR 100, which Tonie successfully pulled apart and unsuccessfully put back together. Now, years later and with a hell of a lot more experience under his belt, Tonie and the team from BGM have turned out this, a cracking 1979 Kawasaki Z400 street scrambler. 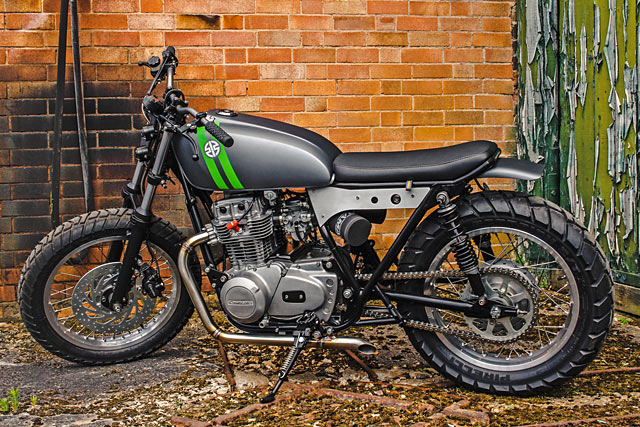 It’s even more impressive when you consider the donor bike they were working with. “I bought it off eBay for £500 back in 2014,” Tonie says, “It was a well used commuter bike with a few miles on the clock but it had great potential.”

When he talks about potential he’s referring to the initial plan for his new bike — a simple, low-budget shed-built project. But then things spiralled out of control when he met Den and Clive from BGM Cafe Racers. 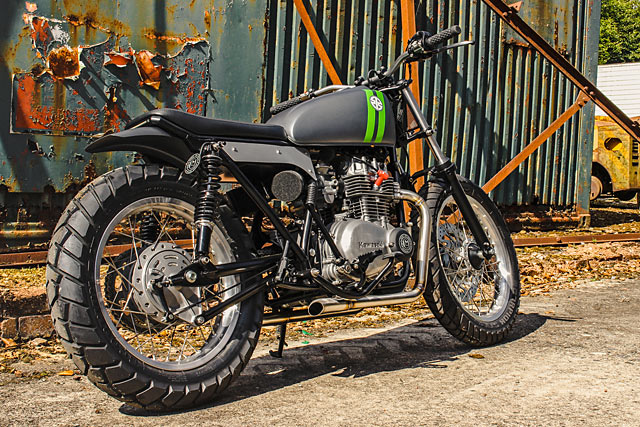 BGM is a small workshop in the very English sounding Stratford-upon-Avon. And while the plan was to have the guys on hand to help solve any problems that might crop up during the build, over the next few months they got along so well they asked Tonie to join them at BGM. 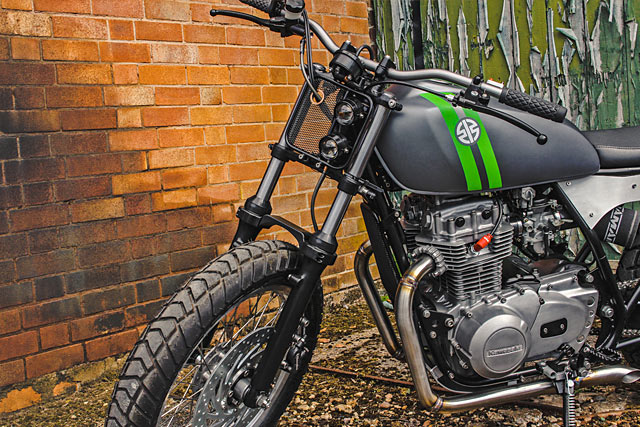 It’d be a good team to be a part of, the shop producing customs of increasing quality and scope over the past few years. And they’ve got neat stuff in the works too, chiefly a tidy RD250 and mean CB750. But we’re getting ahead of ourselves here. Back to the Zee. 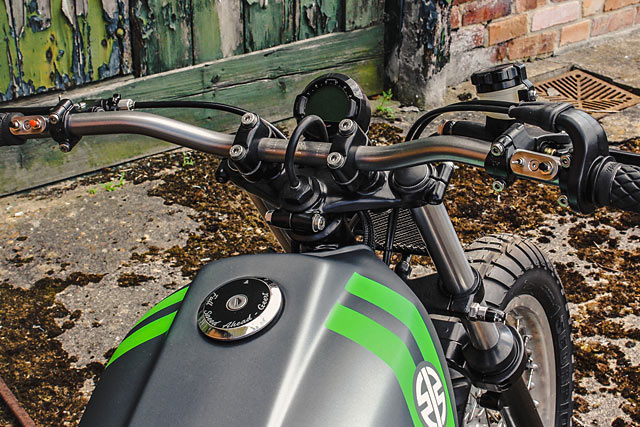 The Z400 was a happy little commuter produced by team green for ten years from the mid 1970’s. It’s certainly not a firebreather in the same vein as its bigger brother, but after some initial teething issues the lil’ Z400 found its place as a happy everyday commuter, running people to and from work with a minimum of fuss and modicum of style. That was until Tonie got his hands on it. 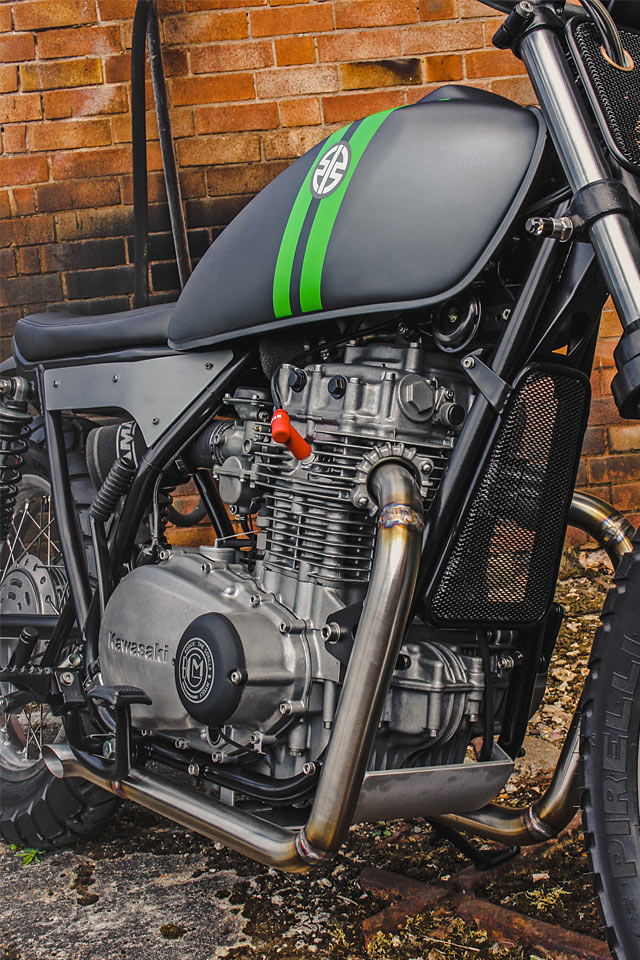 “The idea was to build a compact street scrambler with wide and low bars and with a flat track feel to it,” he says. Sounds easy enough, right? But tidying up a motorcycle with forty English winters behind it is no mean feat. So they went back to basics, removing the engine and stripping it down for vapour blasting. And while that was being worked on they started on the frame.

[superquote]“But tidying up a motorcycle with forty English winters behind it is no mean feat.”[/superquote] 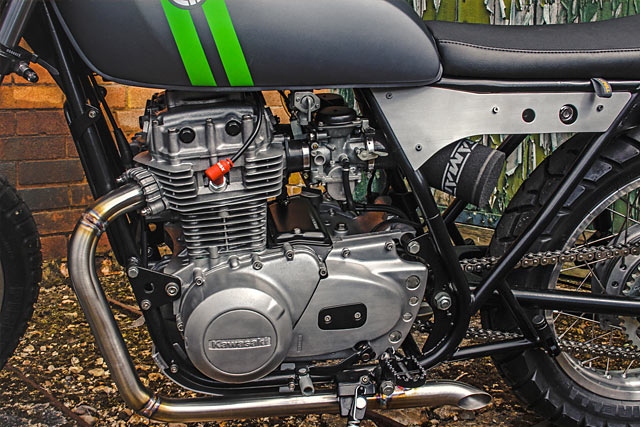 The frame was de-tabbed, stripped and the rear pillion footpegs trimmed and moved forward, in order to keep the back-end looking uncluttered. A seat loop was installed with a slight upwards kick before the whole thing was sent in for powder coating.

With it all back together the engine was mounted, fitted with a suitably angry exhaust system and twin ramair-style filters. Keeping everything clean is a new set of switches that run through the bars, twin LED headlights and a new battery box. There’s also a neat front brake arrangement, now a Brembo caliper taken from a BMW.

The end result of all that work is tidy little street scrambler from BGM Cafe racers, one they’ve dubbed ‘Full Speed Ahead’ in honor of Tonie’s departed friend Geert Van Neste. ‘He was a good friend and an amazing character who believed in taking life at full speed,” Tonie says. Geert would be proud. 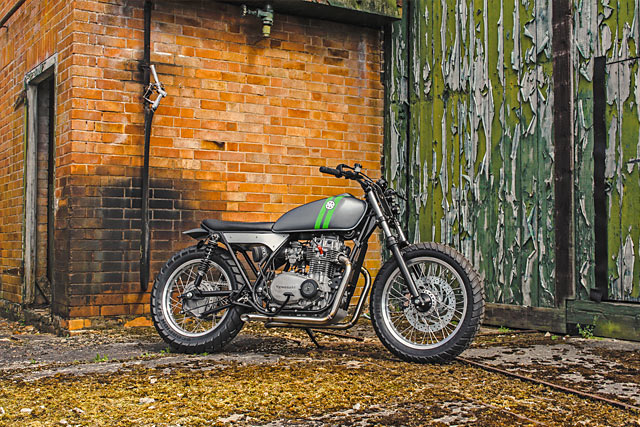