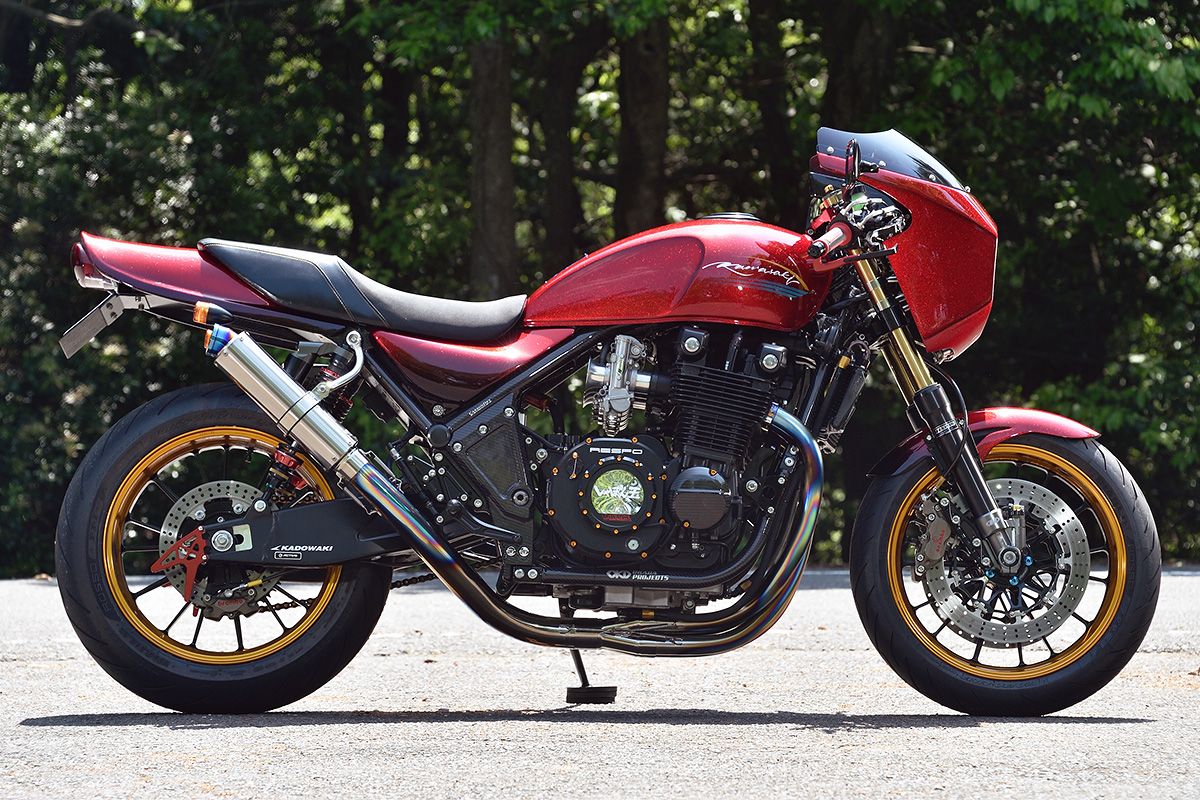 The JDM modified car scene has had its heyday, but the vehicles that dominated the scene and remain incredibly expensive to this day were almost exclusively from the ’90s. Think Subaru WRX, Mitsubishi EVO, Nissan GTR, Toyota Supra, Mazda RX7 S6 and those VTEC Hondas. But the motorcycles from the same period really haven’t been such a global hit, that is unless you’re in Japan itself. There the custom scene has embraced the last of the truly analogue machines like nowhere else and a host of workshops dedicate themselves to producing period perfection. Enter Shabon Dama, named after a popular nursery rhyme, they build killer Kawasaki’s and few come cooler than this Zephyr 1100.

The one real problem for Japanese builders of ’90s JDM vehicles, whether they be cars or bikes, is sourcing donors. As many were either sold by manufacturers in much larger numbers around the world or left the land of the rising sun via the ever-popular auction system that sees overseas buyers snap up used Japanese stock for bargain basement prices. So, the solution has become for Japanese shops to not just buy one donor at a time, but grab a container full, so they have the basis for future builds whenever a customer comes calling.

Immensely popular around the world, the Zephyr was offered in a host of engine capacities, with the 1100 being the top dog of the model line-up. For those not wanting the new generation of sportbike, they offered plenty of power in a stylish throwback design, inspiring the new retro craze that continues to this day. The problem with so many of these bikes was never the engine, the styling or even the adequate suspension, manufacturers simply used retro as an excuse to build frames that weren’t much better than those widowmakers of decades earlier.

So to rectify the problem and give this frame the strength and rigidity it truly deserves, Shabon Dama shunned the usual rewelding and bracing and sought out thoroughly modern technology. With the frame modelled in CAD and the weak areas identified, particularly around the headstock and the swingarm pivot, a process called Carbon Dry Pro-Tech has been utilised. Essentially heat is used to laminate carbon fibre onto the metal frame and the results speak for themselves. To match, the stock swingarm has been thrown aside and a fully machined alloy Active unit is bolted in.

The suspension is serious business, the Active triple trees also sold by Shabon Dama allow for adjustment in the rake, so that the suspension can be tuned to suit a rider’s preference and dial in everything from extreme mid-corner stability to a bike that is much happier at the initial turn in. Dropped through these are the gold stanchioned forks by Hyperpro, the traditional layout still featuring a full array of adjustability. The rear shocks also come from Hyperpro and are designed for the project to make the most of the new swingarm. Finally, the bike rolls on a set of ultra lightweight alloy forged Type S wheels by Galespeed.

The bodywork starts with the tyre hugging front fender and despite the correct period look it is in fact made from high quality carbon fibre. This sets the trend for much of the body with those perfect fitting side covers also made from carbon but giving a factory feel. The tail unit picks up the styling of the original Z bike and it too is an all Shabon Dama carbon unit.

Both the tank shaped in-house and the Supreme Technology seat have a factory look, but have been finished to an exquisite standard. Then it’s time for paint, and the heavy flake and clever use of shading allows some of the carbon weave to shine through.

But if there is an area where the workshop excels, and everything they do is high level, it’s engine building. The 1996 block has been given a hot dip and then rebuilt from scratch, with the fully balanced bottom end now swinging a set of Moriwaki 80mm pistons. A big overbore was needed, but with plenty of meat on the block, a thumping 1252cc has been achieved to create the basis for a torque monster. To get the air into the pots, the head has been opened up with a custom port job and fitted with a set of Yoshi cams. The long block is then finished with a fresh coat of black paint and a Coworth clear cover.

The standard CV carbs are of course simply not up to the job and have been replaced with 38mm TMR units from Mikuni. The company have filters for the machined velocity stacks but prefer the open look. The exhaust is an in-house design and the titanium system features smooth mandrel bends, that will keep those who hate a lobster cut very happy indeed.

Electronic ignition controls a far stronger spark, an oil-cooler keeps temps under control and to prevent damage a T-Rev system takes care of blow-by and reduces the pressure in the crankcase. You could spend a day just gazing at a bike so good, but then you’d miss the best part, riding a motorcycle built to a world class standard.