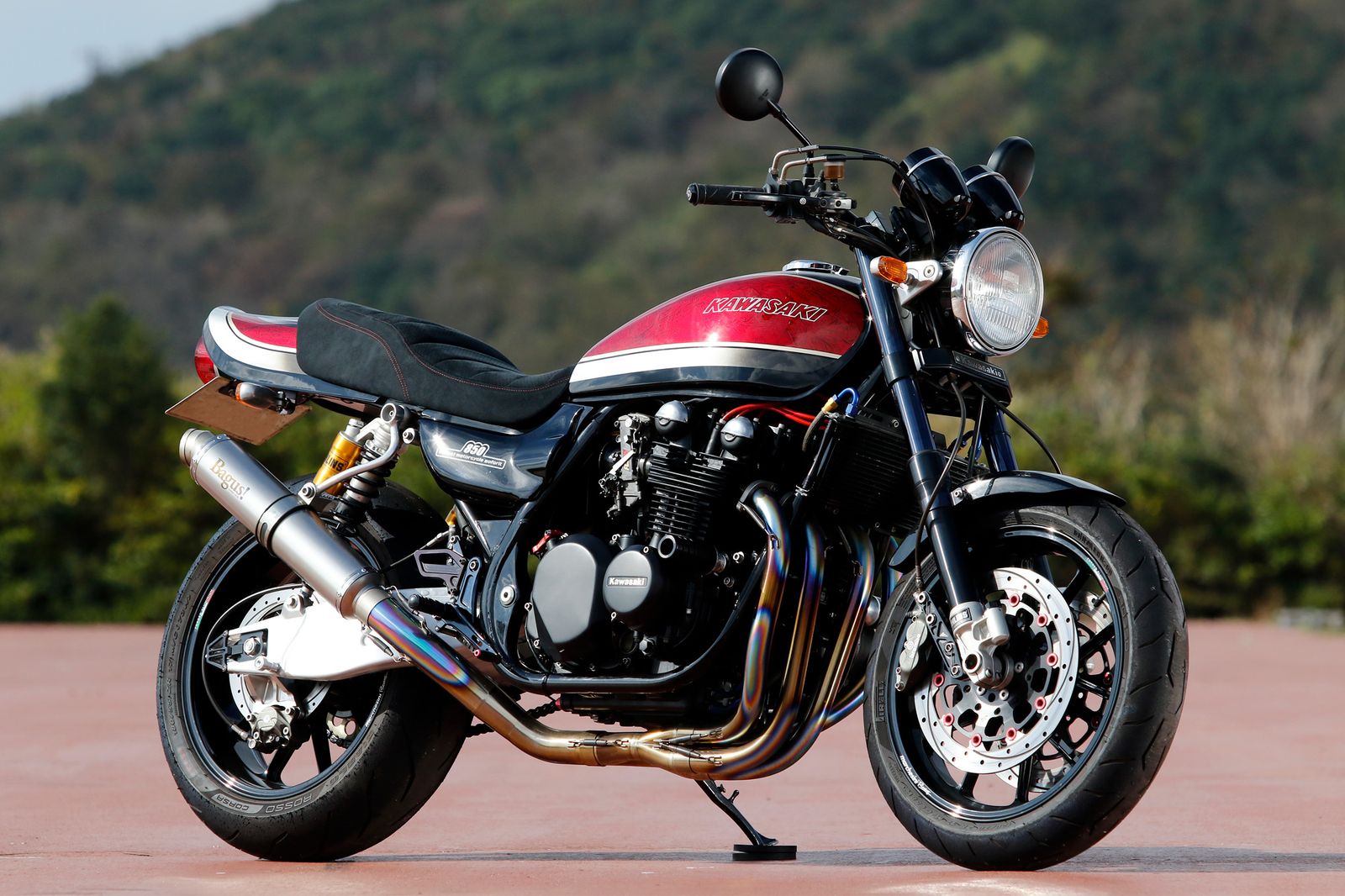 An amazing concert can be one of the most incredible experiences of your life, but if you’re a big fan of the Beatles or Nirvana and you went along to see a tribute band, you might be a little disappointed. I’m sure the members of Nirvana and The Fab Four are decent musicians, but they’ll never be like the real thing and far too often retro remakes of classic motorcycles deliver the same experience, it’s all a little underwhelming. This is exactly how you can describe the Kawasaki Zephyr 750 of the ’90s, it looks and even sounds a lot like the real thing, just in a very ho-hum kind of way. Well, Japanese workshops like Bagus are here to change all of that, and their latest Zephyr build is going to make you want to Twist & Shout in a Heart-Shaped Box.

Great songs and tribute bands aside, there is absolutely nothing rock n roll about the Bagus workshop or the many like it in the densely populated Japanese city of Yokohama. They take the exact opposite approach to McDonald’s, not only are there no big signs to help you find the way, but even when you find the right street and shop number, you’ll likely be looking at what appears to be a nondescript small warehouse with a few air conditioning units on the side. But that’s exactly how the guys like it, the flashing lights and bragging rights are kept out of it, they simply let their bikes do the talking.

The owner of this Kwaka 750 had previously had the guys build him a Zephyr 1100, also from the ’90s, into a full-blown track bike. No expense was spared in making sure that his track days were filled with big smiles and quick lap times. But how often can you actually get to the race track each year? So he headed back to Bagus! with a donor bike of the smaller capacity machine and asked the guys to use all of their race bike building skills to craft him an incredible 750 for everyday use. But it seems that he’s a horsepower junky, and while you might assume this Z build is similar to many of the Japanese bikes of late, that’s where you’d be wrong.

This engine package takes things to a whole different level, and it starts with the top end that’s been drilled and tapped for a second set of plugs, skimmed, and had the ports opened up on the twin cam, but only 2 valves per cylinder, configuration. The need for such a modification to the ignition side of things becomes clear when the guys slot in big valves that are all controlled by a set of bigger dollar Yoshimura camshafts with increases in lift and duration. In an engine already prone to overlap, this setup would see a lot of the mixture combust on the way out of the chamber, but the twin spark setup ensures a clean and efficient burn for maximum cylinder pressures.

To control this process even more accurately, the guys selected an AS Uotani SPII ignition system, that adds twin coils, a control box, and the ability to electronically control the ignition map and tune it for maximum performance. The bottom end is just as well screwed together, with the block opened up and the bore increased to allow for high compression Wossner forged pistons that pump capacity out to 843cc. To keep everything cool, a 16-row oil cooler utilises the company’s top feed system for even distribution. And the package is finished out with throaty 35mm FCR carbs and a tuned length 4-2-1 titanium exhaust system, with the middle section kept deliberately short.

This bad boy sure can scream, but it needed a bike that could handle all of that power and the chassis comes in for extra bracing around the known weak spots. The stock swingarm isn’t actually a bad bit of kit but compared to the press-formed full alloy item that Bagus makes for race machines, it is simply no match. To control this new rear end, the guys built new upper shock mounts to match and then bolted in a set of adjustable Ohlins shocks. To get the big girl turned in requires more rear brake than on a modern machine, so a full Bagus package consisting of their own mount with a Brembo caliper and Sunstar disc gets the call up.

Moving to the front end and keeping the period look but drastically improving the handling is a set of blacked-out right way up Ohlins forks, with billet 7075 lowers to reduce the weight. It all slots in through custom machined Bagus triple trees, with the braking package utilising Brembo P4 calipers and a big pair of Sunstar discs. The rolling stock is lightweight stuff, Marchesini Racing M10S alloy wheels, that are the go to in Japan at the moment and have been wrapped in Pirelli rubber. The bodywork too might look stock, but it’s all about lowering the mass and the fibreglass tank is joined by a carbon fibre tail unit and side covers.

The paintwork and upholstery are simply stunning and give the owner a little more luxury than he finds on his race machine. The deep red is picked up in the stitch work and the black, silver, and white graphics are a modern change over the traditional Kawasaki colour schemes. The clocks and the headlight are all refreshed originals, while the taillight and mirrors help to capture that classic Z aesthetic.

Race levers and custom built rearsets keep the rider slotted in and having done so much amazing work to that engine, it’s no wonder the guys fitted crash protection. It might be a bike from the ’90s with a golden era look, but Bagus! has made sure the owner of this Zephyr will monster just about anything on the street, and that makes this tribute a rare find, it is simply better than the original in every single way.