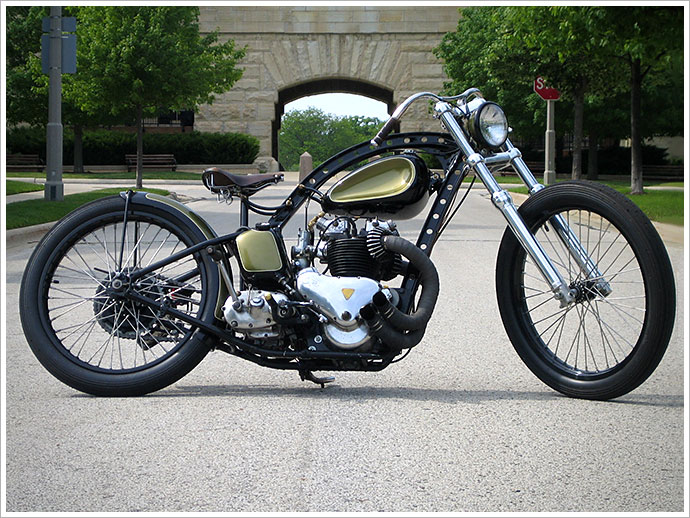 Me, I’m a guy who likes to plan. I like to draw and concept. I like colour swatches and mood boards and paint samples. I like to give myself plenty of time to tweak and stare and think. I like Photoshop because I can try hundreds of different ideas in a short period of time and choose the one I like the best. I like symmetry and geometry and precise measurements. I do things “just in case”. I budget and I scheme and I think and I think and I think. And after all that I still find that the end result of my toilings can often times be just as average as the next guy. That’s why I’m totally envious of guys like Kendall Lutchman – guys who can grab a bunch of old hotrod spares, junk tanks, scrap steel and only the most fleeting of plans in his obviously sharp mind and build a last-minute bike that cleans up at two bike shows in two days. Just goes to show – the gut beats the head every time. Here’s Kendall. “I never knew I was going to be building bikes for a living, but here I am. It started when I was 6 years old, I received my first model car and loved it. I have built models all my life, and still do. When I was about 10 my older brothers were always in the garage, building hot rods with their friends. I would be building and painting bicycles next to them, trying to fit in any chance I got. I was always drawing and when I was about 13 I picked up my first pinstriping brush and loved it. By then everything in the house was pinstriped, Mom did not like that too much. At 16, I got my first car it was a 1962 Chevy Impala, which was given to me by my dad and brother. I wanted a motorbike but wasn’t allowed to get one because my Mom did not like motorcycles. So I stuck to cars, and after high school I got a job at a restoration shop and worked there for 2 years restoring old muscle cars. After leaving there, I bounced around to a couple different body shops. When I was about 20 years old, I found myself working at a top notch restoration shop painting high end cars like 356 Porches, Ferraris, Lamborghinis and Rolls Royces. I got tired of working for the man and started working from home, for myself.” Loving the way the tank hangs below the frame

“Fast forward now 8 years later, I finally bought my first bike. Having built many bikes for friends and customers and decided it was time to build a bike the way I wanted. I bought the Triumph 2 years ago in Daytona. I started it in January of 2010. At first, I wasn’t sure what style I wanted to go with. Looking back, I always loved the boardtrack-style bike. I was fascinated at how these men were racing bikes without any brakes around a board track. So I told myself that’s it, I was going to build a boardtrack triumph, a bare stripped down scoot. So everything on the bike was all hand formed and made in-house. On a budget for this build, not wanting to spend a whole lot but still wanting to make it nice, I made the frame with left over parts from hotrods. The backbone is from a ’38 Ford front axel and the down tube is a ’31 Model A.

The whole bike was metal finished, that way I would have less work when I painted it. I made the foot controls and license plate bracket from scrap steel. The seat is from a Brooks B ’72 Raleigh bicycle, I used ’36 knuckle buddy seat springs and wanted to hide them behind the transmission, so the seat looks stationary but is actually fully functional. Pipes were made from bends from take off, the tank is an original Wassel, made in England. The tank had been used as an ashtray in my buddy’s shop. Rear fender came from Pat at Led Sled Customs. The wheels are from Warren Jr. at Jr. Cycle Products, headlight is a Bates, handlebars are stainless steel, clutch and internal throttle from Cook Customs.” Come to think of it, that tank DOES look very butt-worthy

“I did not have paint on this thing ’till Friday March 4 and was trying to make it to Daytona by Monday. So a couple of friends came over and helped out so Saturday I built the motor then finished up Sunday night, went to bed and left Monday for Daytona. I have ’till Thursday for the Willies show, that’s all I wanted to to do for so many years was build my bike and ride it to Willies old-school chopper show. Well with the help of all my friends I got it done around 6 o’clock in the morning and rode it to willies at 1:30 in the evening. After all the headaches and cuts and no sleep, plus trying to keep the girlfriend happy, it was awards time and they call my name for best British. I was so fucking happy that I did it I finally accomplished something for myself. I was honored, so the next day I took it to the Limpnickie lot show and not excpecting to win, well I did it again! I won best Euro, thinking it was over 5 minutes later I hear my name for best of show. Really? Best of show! So after a week, and a lot of fun I would have to say that 2011 Daytona bike week was the best time in my life. I have to thank Warren Heir Jr., his dad Senior, Jaymo, Matty, Mike, Kyle, James and my girlfriend Liz, and everyone else who got me there on my bike – thanks again.” I think there’s a lesson in this build for all of us. Sometimes over-thinking things is the worst move you can make. It’ll often lead to internal conflict and needless complications in what should be a really simple process. Of course, there are always exceptions to the rule – and there’s always moments in life where you definitely shouldn’t listen to your gut. Just ask Charlie Sheen – and your mate with the Thai ladyboy as his new, surprise girlfriend.