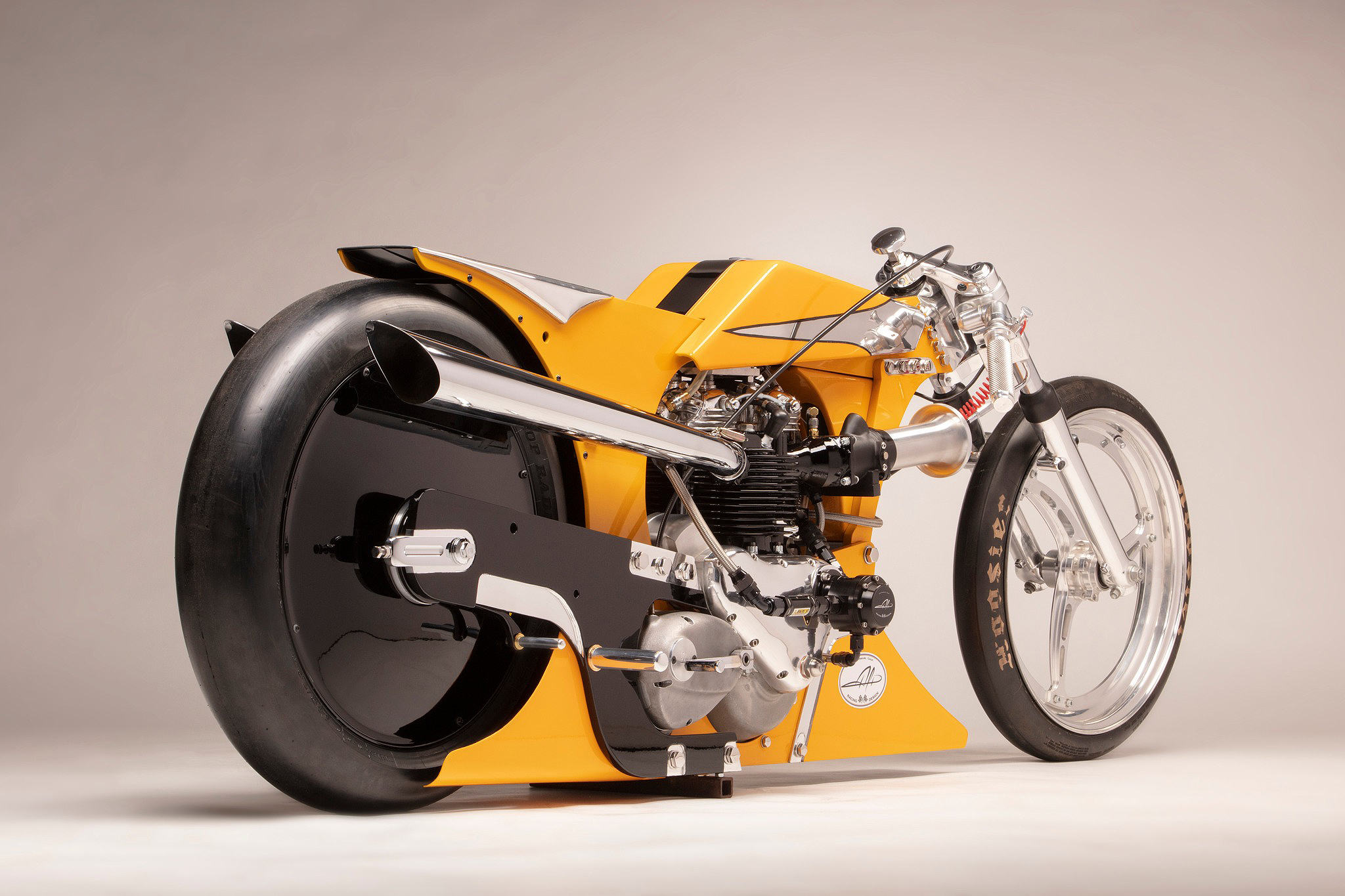 To the general masses the salt flats of Bonneville are best known from the Hollywood movie ‘The World’s Fastest Indian’, but for the people who race there, it is simply the Mecca of speed. Sadly the salt is thinning on the famous flats, the length of the track having to be reduced, but still the faithful show up to push man and machine to the absolute limits. One such outfit is Alp Racing & Design, a husband and wife duo that have salt on the mind, nitro in their veins, and a constant need for speed. Together they’ve set fifteen speed records at Bonneville and El Mirage and now they are unleashing their most radical machine to date. An all alloy modular frame, powered by a nitro snorting Triumph engine, its name is The Killa Bee, and it packs a serious sting in the tale.

Alp Racing & Design was founded by Alp Sungurtekin in 2001 in Los Angeles California and he was joined in 2007 by Jalika Gaskin – who became the Crew Chief when they started racing in August 2011 at Bonneville Speedweek. Alp is a qualified industrial designer who specialises in the transport industry and is quite simply a genius, while Jalika is a talented artist, fashion model, and all-around renaissance woman who is as comfortable firing up a nitro breathing race bike as she is crafting intricate jewellery designs. Together their focus is on land speed racing classic Triumph powered machines, to the fastest speeds possible and beyond.

The goal for their latest build, The Killa Bee, is to take on and break the A-PF 1000 record at Bonneville held by Yankee Engineuity Express/Harley Davidson which stands at a massive 166.843mph – the bike has already hit 170.749mph at a Bonneville Test & Tune event! Thankfully the team has plenty of experience and as regulars to the salt have become not only a mainstay of the scene but have soaked up endless valuable information from some of the legends and pioneers of the sport. Their previous records have seen them compete largely with pre-unit Triumph engines in a custom rigid frame, and they’ve joined the 175mph club at El Mirage.

But as Alp will explain, the first part of this build is truly unique. “I have not used any tubing this time around, it is all made out of 6061 flat aluminum sheets. It is completely modular, no welding on this one, all bolted together, I have not used a CNC or water jet; I cut each individual sheet on the band saw and file them by hand. The frame is designed to be as aerodynamic as possible while complying with the naked class. I machined the headstock which I then sandwiched between the upper frame members, the upper frame is similar to my Vincent LSR.”

Like the great British engineer Allen Millyard, it’s all done in the home shop, with relatively simple old-school machinery, that just makes the end result that much more extraordinary. Watching it all come together via the pairs social media pages is simply extraordinary, huge bolts and lots of them clamping the whole thing together, beautiful raw metal machined to perfection and every part seeming to serve multiple purposes while maintaining the purity of the original design. An alloy fuel tank is brilliantly incorporated into the structure and Alp doesn’t have much of a seat to sit on, this is function in all its glory.

“The front chin fairing is part of the concept and not used while racing in the naked class.” And Randy the owner of the bike obviously loves a bright colour, with friend and painter Bryan doing a killer job at laying down the Porsche Signal Yellow. But what makes this such an impressive machine is the engine, as Alp describes it, “a mechanical fuel injected pre unit nitro burner!” Years of testing, racing, learning from the greats, and time in the shop have allowed the team to build these incredible Triumph engines. This one starts life as a T140 750cc that is taken out 030” over and which places it in the 1000cc class.

To reach the speeds they need to break the records they’re chasing means producing more than three times the standard engine’s power, and that’s where the nitro comes in. Alp runs a 95% nitro mix, with the rest being methanol, also used by Jalika as part of the starting procedure. But where the ideal mix for a petrol engine is 14.7:1, the stoichiometric ratio for nitro is an insane 1.7:1, so you need a lot of it. One of the big advantages of the fuel is it carries its own oxygen, but with the engine needing to consume so much air and fuel, cylinder head design is a huge part of the equation, and it is another area where the team is in a league of their own.

Massive compression, a Morris magneto, Alp’s cams, and parts from a host of the industry’s best companies who support and sponsor the team, all make it happen. One thing fans of old vintage British twins are probably thinking is, but what about that vibration? And it’s true in stock form they rattle a lot, add nitro to the mix and you can only imagine, but brilliant chassis and engine building result in a perfect engine balance factor, and even revving them hard and high, Alp finds them to be “smooth”. The results speak for themselves, Alp and Jalika have all of those fifteen records to back up their ability and they’ve become a beloved part of the Land Speed Racing community.

And just to prove speed is beautiful, the ‘Killa Bee’ recently won the Founder’s Award at the recent Born Free Show; now the salt awaits, records stand to be broken and the eye-watering smell of nitro is thick in the air – you can hear the beast starting up here.