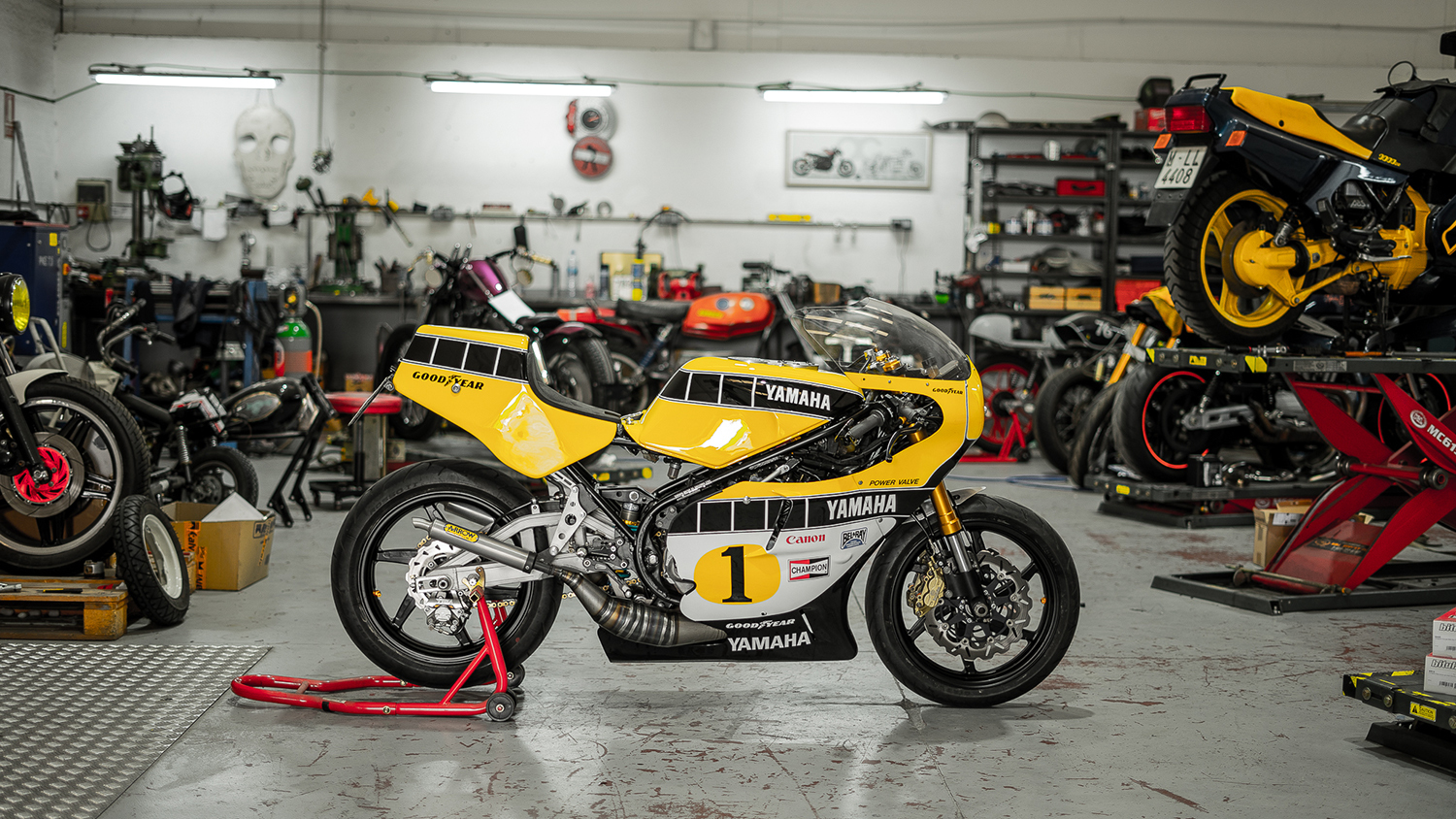 Since the early ’90s motorcycle showrooms have been filled with ‘Race Replica’ models for the consumer who wants a bike that looks like a GP winning machine for their own Sunday ride. Repsol Honda’s, Moviestar Suzuki’s, KRT Kawasaki’s and on it goes, but let’s be honest, you’re purely paying more money for a set of stickers. And while Honda, Ducati and BMW have released genuine race bikes that any man can buy, you’ll need to part with your firstborn to afford one. So Spain’s Nitro Cycles came up with the best solution there is, build their own! Starting with a Yamaha RD350 they tip their cap to King Kenny with a ripper little rocket that’s the perfect balance of road and race!

There is an obvious advantage to starting with a two-stroke, you don’t have to do a lot to make them sound and feel like a genuine race day special. It was the success of the Aprilia RS, for near on the same price as any other learner legal bike, you got a machine that looked and sounded much like Mr Rossi’s racer and had some damn fine performance to back it up. Although the 1985 RD (badged an RZ in much of the world) was sitting in the corner of the shop, it wasn’t until the process of the build began that Nitro Cycles Antonio Testillano realised just what he was creating, “I never thought that my little RD would turn into a wild 2 stroke bike,” he smiles.

So with a rough plan sketched out and a catalogue of amazing customs behind them, the team knew that to build a true race replica the stickers would come last, first, they had to get the foundations right. “The idea was to follow our philosophy, make it lighter and faster. At first, we had to improve all the weak points of the RD.” With the frame cleaned up, all the unrequired brackets cut off and a new coat of black laid down it was ready to accept some special goodies. The weak little swingarm was thrown away and in its place goes a race-proven aluminium piece from the Suzuki RGV250.

Lighter, wider and a hell of a lot better in every way, it transforms the rear end of the bike, but to truly make the most of it a serious shock was required. With the right brackets and mounting points made to accommodate it, a fully adjustable Nitron rear shock was slotted into place and is one of the single biggest changes you can make to a motorcycle to really bring the race to the roads. Of course the skinny little forks up front would be no match, so they too go in the bin and are swapped out for a set of RS250 forks that have been fully rebuilt and given the perfect gold finish.

The braking is no less serious, up front the twin Brembo calipers provide bulk stopping power for such a light bike and are matched to a set of wave pattern discs originally intended for a Monster. Out back a single lightweight rotor joins the party and the underslung caliper with custom lines is the perfect piece should you need a rear tyre change at your fictional pit stop during the traffic light GP. The Aprilia donates its wider, more modern and lightweight wheels that are wrapped in Pirelli Rosso Corsa 2 rubber for a little more race pedigree too.

Now the boys had a serious little chassis on their hands they could start to make it look as good as it was going to perform. To achieve this goal they selected the exact same bodywork as the TZ racers of Kenny Roberts and began to adapt them to the bike. This was no bolt-on task and required expert modifications to both the frame and the panels themselves so they would not only fit but line up straight on the bike and also not interfere with any of the very real-world functional parts the Yamaha retains to be useful on the street, like a kickstand.

To go the extra mile the tank was restored to new and a dual dry break coupling was recessed into the top. “Our aim was to have a race bike for the streets, we want to generate confusion in the people and the perfect way to do this, was with an amazing paint job. The best, in my opinion, is the King Kenny design, the most beautiful design ever,” Antonio grins. And there is no denying, the paint and decals are absolutely stunning! However it’s only when you allow yourself to be drawn away from that yellow that you realise, this bike has a proper front fender… and an LED headlight.

The steps to make it both road legal and practical don’t stop there either, bar end mirrors allow you to see the traffic disappear behind you and a set of Motogadget indicators do their job without any fuss. A small Motogadget speedo joins the old school tacho and temp gauge for instruments, while a quick action throttle and Brembo radial master cylinder brings some motorsport specs to the controls. The zinging 350cc two-stroke draws air via pod filters and the gorgeous expansion chambers with Arrow pipes wail into the distance. The result is a true racer for the road, a bike you could do a club day on and then cruise back home.