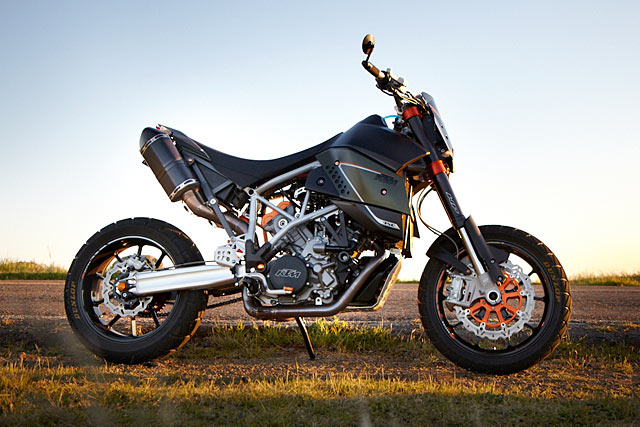 Custom builders and factory designers used to be at polar opposites of the spectrum. Like chalk and cheese or Harvey Weinstein and Germaine Greer. But as the custom scene has kicked down the factory doors, we’re seeing more and more crossover. The biggest victory in the past few years was Ola Stenegärd’s R nineT tour de force at BMW. Don Cammorata, aka ‘Machineform’, is also a BMW designer, a big custom fan and good mates with Ola. His new F750 & F850 GS designs were officially revealed at EICMA yesterday. And today we’re equally as thrilled to bring you this, his ‘custom that looks like it came from the factory’ KTM 950 Supermoto. Born and raised in Northern California, Don grew up riding bicycles, fanging dirt bikes and fixing up cars. “I always personalized or customized everything I owned with wheels,” he reminisces. Educated at Art Center College of Design in Pasadena, Don does not consider himself as a ‘bike builder’. “By profession, I am trained as a Car Designer with in-studio experience at Toyota, Honda Motorcycles, BMW Motorrad, Porsche and Triumph Motorcycles”. The bike started life as a 2006 KTM 950 Supermoto. Don bought the bike new in 2006 and rode it for a couple of years before deciding to sell it. “Then I realized that the re-sale value was crap, so I decided to cut it up”. We like Don. [superquote]“The main goal of the project was to build a bike to ride and thrash on, as well as to make it unique in style”.[/superquote]

Thinking that we knew how these creative designer-y types worked, we asked Don about his inspiration. “I had no specific inspiration for the build; the main goal of the project was to build a bike to ride and thrash on, as well as to make it unique in style”. “My intent with the project was not to mess with any of the stock reliability and function of the bike as it is awesome to ride straight out of the box from Austria. The plan was to make it unique and in my own style. I basically got rid of all the stuff that was designed and driven by markets and laws.” Nice. After stripping the bike, Don realised how pure, clean and well engineered the chassis was without all the bodywork. Sounds like a great place to start a custom build, then. Don did a few sketches and from there he just started to put the stuff back that was needed to keep the build and ride quality of the bike intact. “Many of the fabricated parts were initially mocked-up in cardboard or blocked-in on the bike’s bodywork using bits of used KTM panels and tape. Basically, it was a lot of trial and error; I have the photos to prove it”. Don’s answer to what task he found the most challenging during the build was probably one we can all identify with but that is rarely mentioned. “Honestly, the hardest part of the whole process was staying focused on getting it finished”. An army of half-finished Craigslist bikes proves his point perfectly. Better to under think and over do than vice-versa. With time to ponder his creation, Don discussed his favourite part. “For me, it’s the bike’s proportions. The way most of the bike’s mass is centered around its mechanical core is great. That, along with its performance sportsbike hardware”. And we saved the $64,000 question for last. Just what kind of bike is it, Don? “The bike is a bit hard to classify. but for me it’s part urban assault vehicle, part high performance back road bomber and part gravel road super scrambler”.