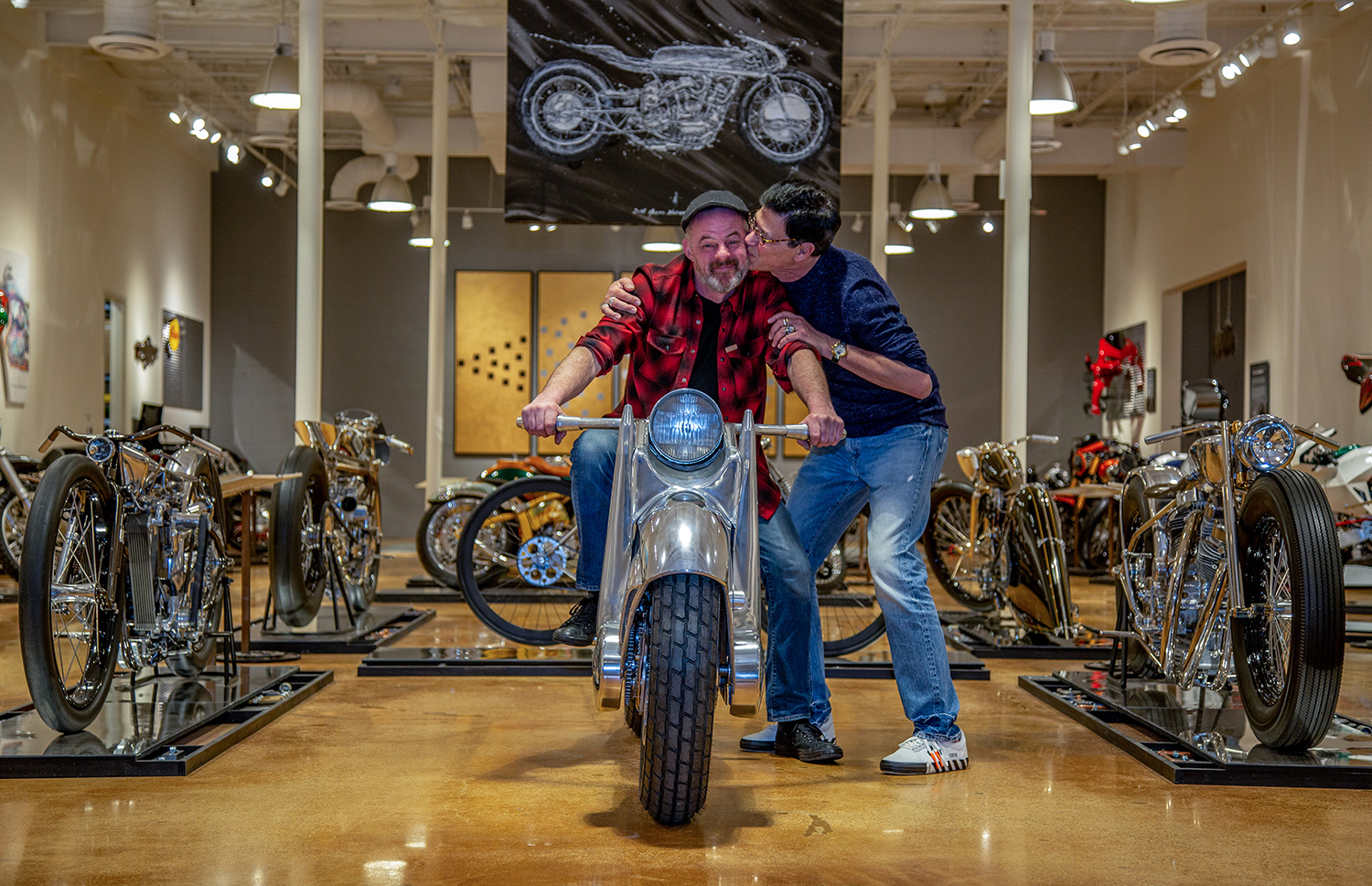 What would you do if you had enough money to last several lifetimes? Would you keep doing the job you’re doing now? Or would you quit your day job and follow your passion? What if you didn’t know what your passion was? These were the questions Bobby Haas found himself asking at the age of 41 after successfully sealing the deal of a lifetime and walking away with enough money to never have to worry about it again. This new documentary about Bobby’s remarkable life, called ‘Leaving Tracks’, gives us an in-depth look into his achievements and how he became the patron of the custom motorcycle industry.

Starting in the world of finance with no family money behind him, Bobby worked his way up to buying and selling large companies. His most famous deal – and the one that sent him on a different trajectory – involved selling a group of soda drink brands, including Dr Pepper and 7-UP. After cashing in, he came to the realization that he could really do anything he wanted to. “The money that I made from my investment career created a currency that allowed me to do other things that are pure pleasure and pure passion,” says Bobby.

After leaving the finance industry in search of something more rewarding, he eventually found a passion for aerial photography. With no formal training, he began carving out a name for himself by shooting amazing wildlife photography for National Geographic magazine. He travelled the world for many years, hanging out the sides of helicopters and small planes over remote countries around the world – conquering his fear of heights in the meantime. The career resulted in a series of five books (including several bestsellers) and exhibits throughout the world over the course of a decade.

Bobby then re-invented himself again. He always had a fascination with motorcycles and anything that got his adrenalin pumping, so, at the age of 64, Bobby decided it was time to buy one. What started with one bike, soon became four bikes and then more and more were added to his collection. Then he had an idea that would change the livelihoods of many of the best custom bike builders around the world: he decided to create “the finest motorcycle museum in the world.”

This started his obsession with the custom motorcycle world and his journey curating the Haas Moto Museum. It’s no surprise that Bobby has bought and commissioned bikes from some of the best motorcycle builders on the planet. Most of these artists feature in the film and all of them have become very close to Bobby. The likes of Craig Rodsmith, Max Hazan, Shinya Kimura, Dirk Oehlerking, Christian Sosa, Jay Donovan, Walt Seigel and Michael LaFountain now call Bobby a friend. He has changed the game for this group of niche artists and is helping them realize their full potential. Letting their imaginations run wild with generous budgets and flexible schedules, all in pursuit of realizing the builder’s dream, or Bobby’s vision – or more often than not – a shared ambition.

It’s clear that Bobby is someone that doesn’t do things by half measures. He throws 110% of himself into every project and passion. In only a few short years he has put his money where his mouth is and built one of the best motorcycle collections in the world. “I’m not doing it for the money.” Bobby says with self-deprecating humor, “I’m doing it for the art. We’re not trying to make money here. We’re trying to lose a certain amount of money. And we’re doing a wonderful job at it.”

To be honest, I thought the film was just going to be about a guy who made a ton of money and bought loads of motorcycles. It turns out it was a lot deeper than that, which actually makes this story even more compelling. It might sound a bit corny, but this film is about love, kinship, art and making a difference in people’s lives. At one point in the film Bobby asks the question: “How much money did Rockefeller leave behind when he died? All of it.” I don’t think Bobby is going to die wondering where his money ends up.

The film is raw and honest, and Bobby opens up about a range of issues, like the health problems he has encountered over the years – let’s just say he is lucky to still be alive. He also explores a topic not usually found in the macho realm of motorcycle films: mental health. No-one is immune to the disease, no matter how much money you might possess. His friendship with ‘Sarge’ – an Iraq War Veteran who suffers from PTSD and someone Bobby now calls a brother – is the perfect example of how motorcycles can bind people together like family and can help heal old wounds.

This brotherhood seems to be a common thread throughout the film. Coming from a broken family, it is clear that Bobby has been trying to fill that void over the years. Although it has taken him a while to overcome the suspicions about people’s motivations, he now has so many friends he calls brother. “Four years ago, I was having trouble finding people who I loved and that loved me,” he says. “Now I’m having trouble fitting them all on a zoom call.”

Every leading man needs a leading lady, and Bobby’s is Stacey. The film and the Haas Moto Museum could not have been done without her. She is his muse and it’s obvious Stacey has given Bobby a new lease on life. Together they are a force to be reckoned with and have already changed the lives of so many in only a few short years – and I’ve got a feeling they are far from done.

This film was captivating from start to finish, which is only fitting since the dramatic ending packs an emotional punch that you’re not quite prepared for. It should bring a tear to the eye of even the toughest biker.

In true Bobby fashion, a large part of the sales of this film is being donated to the Distinguished Gentleman’s Ride which, in turn, will be helping men’s mental health and prostate cancer research – not that you need another excuse to watch this movie.

The film is being distributed in over 100 countries in 11 languages around the world and can be purchased on AppleTV, iTunes, Google Play, and YouTube. For more information visit the Haas Moto Museum website.