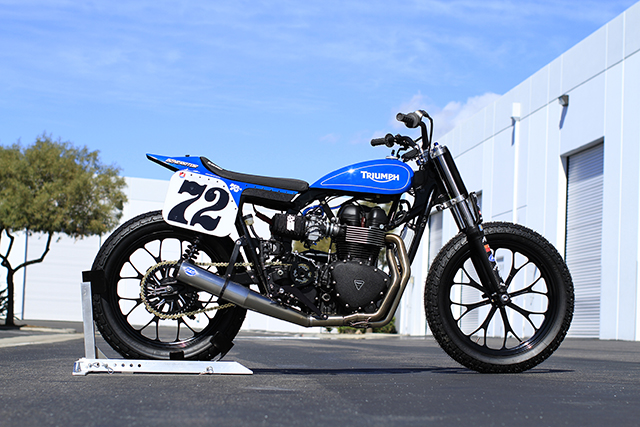 Inspiration can come at any time. But when you’re thinking of building a Super Hooligan flat tracker, there’s probably no better place to be than at a Hooligan race. Last October, flat track racing-obsessed rider Paul Hartman was watching the RSD Super Hooligans Moto Beach Classic from the side lines, dreaming up his next build. “I had just wrecked my Harley race bike the weekend before at a hill climb event,” says Paul. “I knew I would be building a new bike over the winter, but wasn’t quite sure what direction yet.” So Paul sat back and soaked himself in the day of racing, looking at all the bikes, and by the end of the day he had planned his whole next project in his head. 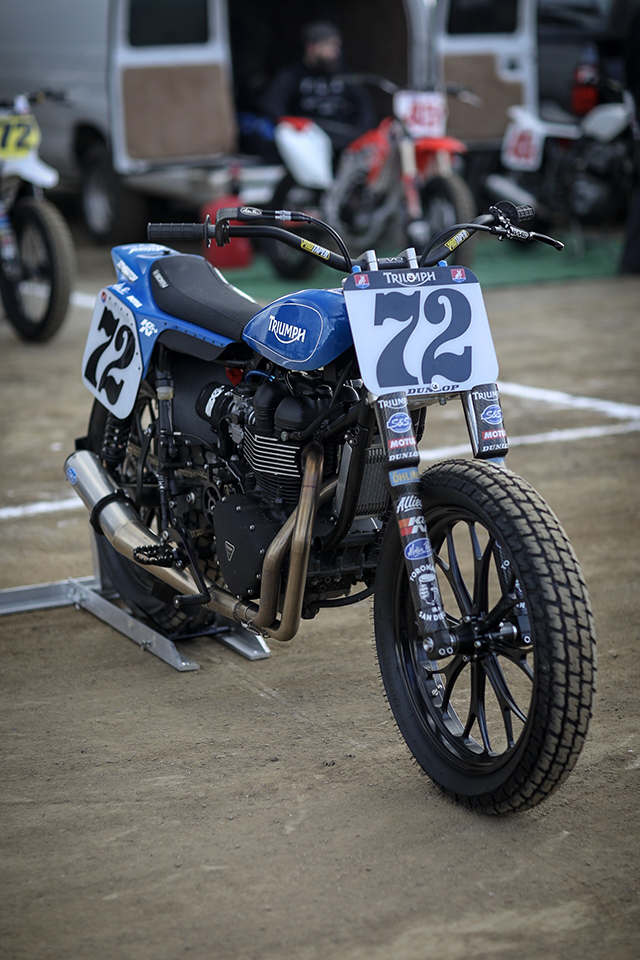 The most common motorcycle of choice in Hooligan racing is the Harley-Davidson Sportster. They are easy to come by and easy to give the flat track makeover. “They are the OG of Hooligan racing,” says Paul. “But to me, I thought they are so damn heavy! The rake is bad at 30 degrees and they have a 60″ wheelbase.” 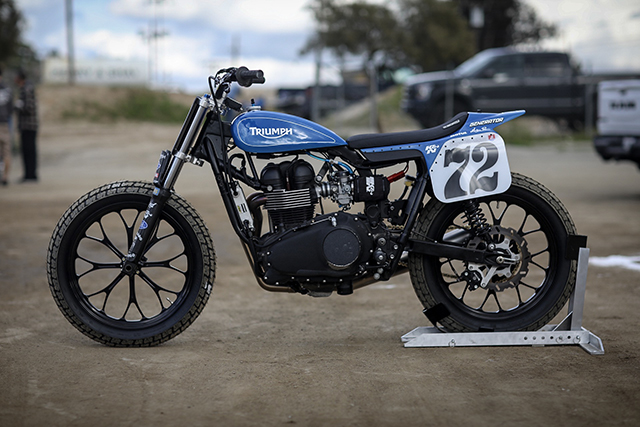 When it comes to building a bike that meets the rules of Super Hooligan racing, it is pretty straightforward. Your bike must be a stock production frame originating with a 750cc or larger engine. “Aside from that, you can do just about anything you want. So with that in mind, I started thinking about different bikes.” Paul began to study the specifications of just about every possible bike that would be eligible for the series and discovered that the Triumph Bonneville had some of the best numbers and dimensions. “It’s got a 27-degree rake, 59″ wheelbase, a parallel 865cc engine that makes good power, and most importantly, its only 451 lbs stock!” 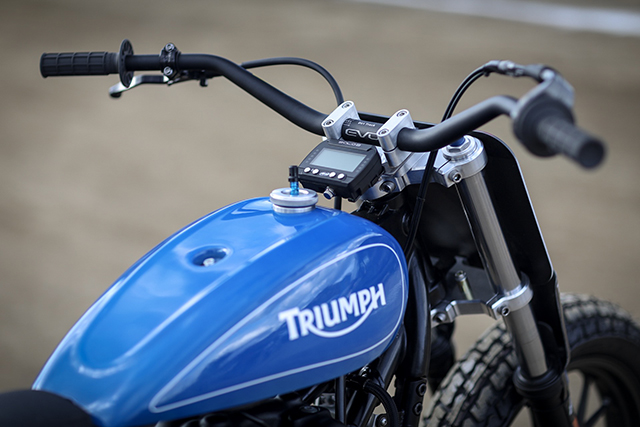 Three days later and Paul had a 2006 Triumph Bonneville frame sitting on his work table. “I sat in my chair staring at it for a couple days. Dreaming, visualising, drawing pictures, measuring shit, etc. It’s really fun when you start a project with just a frame. Nothing to deal with except to see where your mind takes you.” A few more days and a Triumph Bonneville engine shows up. At this point, Paul looks at the engine and frame sitting in his garage and realises how much work this is going to be. “I have to give a shout-out to Richard Pollock from Mule Motorcycles – I spent some hours on the phone with him asking questions and just listening to his Triumph knowledge.” 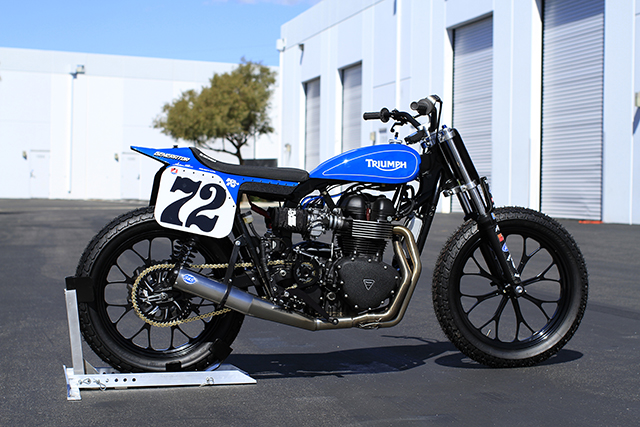 Paul spent the first month of the build sourcing parts, like the beautiful black anodised wheels from Performance Machine. He also found the lightest battery he could find – an Antigravity Lithium battery. There is actually only three Triumph parts on the whole bike: the frame, the engine and the ECU. Everything else is 100% race spec.

The biggest challenge Paul had was getting the geometry right. “I wanted to make it look like a street bike that worked like a pro race bike.” After a lot of mock-ups and a lot of changes, Paul finally had the right look for the bike; he just needed to make it run like a race bike. 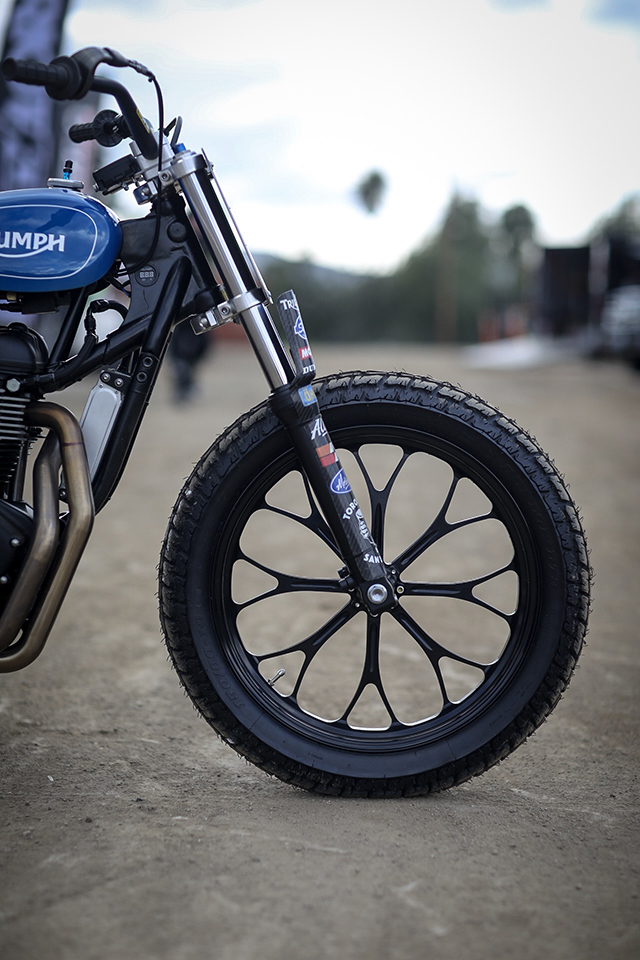 Although the 865cc engine is pretty stock, it has been opened up with a custom S&S flat track exhaust setup and some K&N filters. “With a little tuning on the carburetors and opening up, these engines run like a beast.” The rear braking setup he chose is off the Indian FTR750. 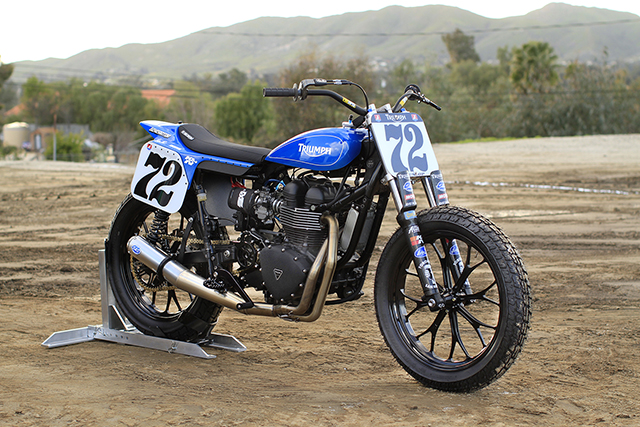 After a solid three months of working late nights after his day job, the bike is finally finished. “I took it out to the flat track in Perris, California, for some testing. The bike is insane. It’s a completely different animal than the Harley I was on last year. After some gearing changes and suspension work, it’s pretty much dialled in. It’s going to take some seat time to feel 100% on it, but I’m already feeling pretty confident this thing can be a winner.”

We will be watching out for Paul in the next Super Hooligan half mile race at Perris Auto Speedway on this super sweet Triumph – whatever happens in the race, we think this bike is already a winner. 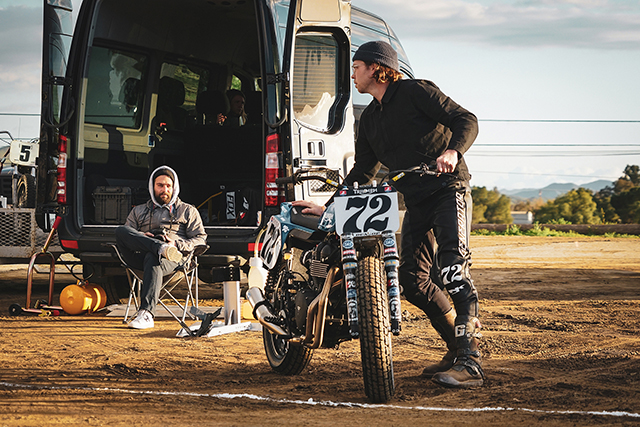 Paul wanted to thank a few people: “I want to give a huge thank you to my sponsors and everyone who helped me out with some things along the way:  Allied Racing, Mule Motorcycles, Generator Distribution, Tornado Bar, Flat Track Coffee, Oceanside Cycle Supply, Motorcycle Dynamics Racing, S&S, LBP Racing, & everyone who helped me with parts and put this puzzle together. Also, thank you to my girlfriend Greer for putting up with me and holding down the fort while I was in full build mode :)”