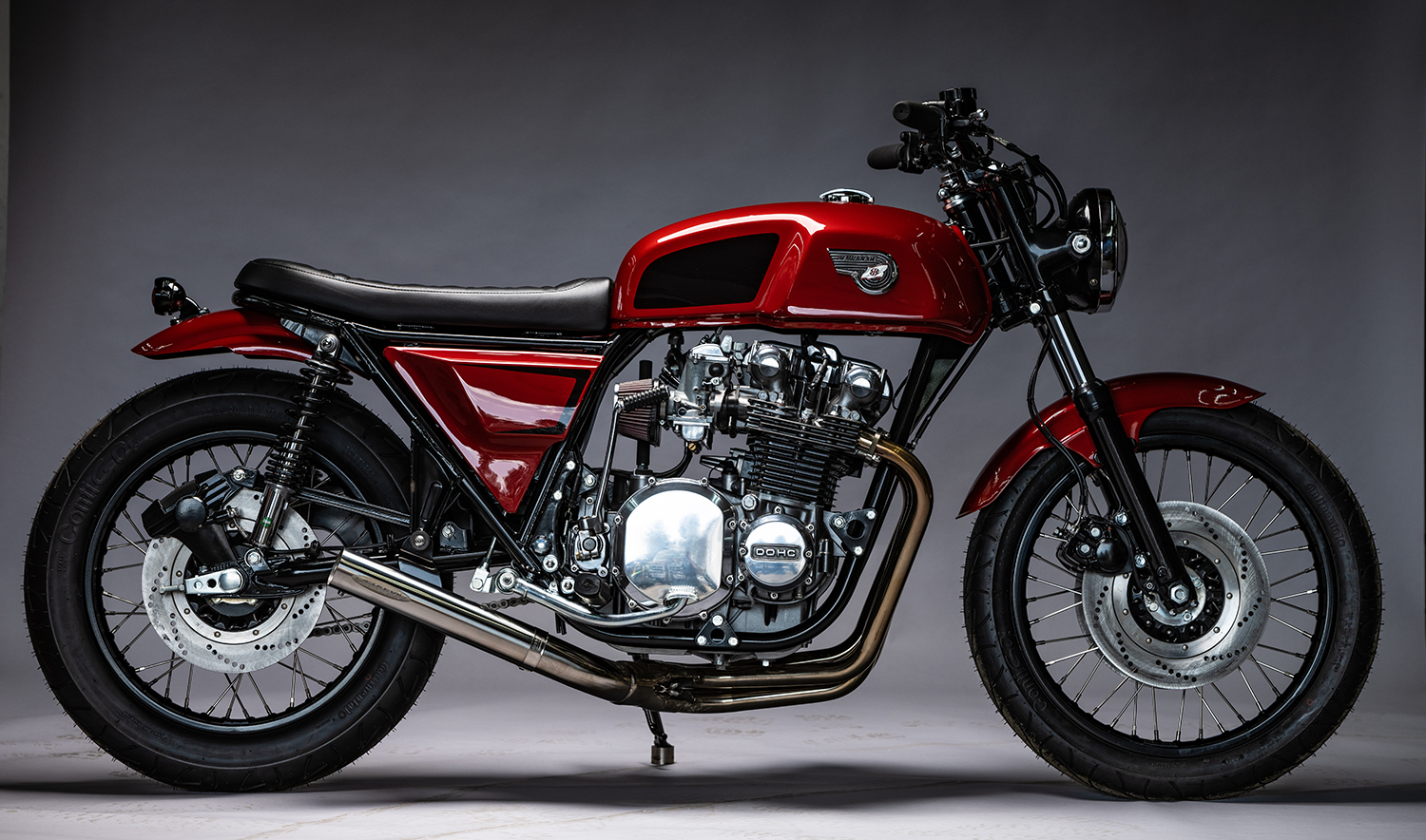 You know that we love motorcycles here, but we also get a kick out of helping their builders get business. You see, when we feature a bike, it’s not just for the world to drool over – a lot of the time the project is for sale, as the builder needs to recoup the hours of labour and expensive parts usually put into these builds. Even better is when a client sees a bike on these pages and contacts the builder to commission a bespoke machine for themselves. So when we hear stories about builders picking up work after seeing the bike on Pipeburn, it warms our heart more than a leather seat on a summer’s day. That’s exactly how this stunning 1978 KZ1000 by MotoRelic came about and we’re chuffed to be sharing the story today.

“Last year a guy by the name Bob Kelly called me and couldn’t stop raving about the KZ he saw on Pipeburn,” explains Sean from MotoRelic. “He asked if he could ship a donor bike and get started on one of his own. My first thought was, ‘ugh, that was so much work to get that tank to fit and all of the other fabrication…'”

After some deep contemplation, Sean decided this build would be easier because he’d already done it once. “Part of building one-of-a-kind bikes is that only one has to be built,” he says. “All of the work in design and fabrication is forgotten about after that first real ride. While talking to Bob, my mind had flashbacks to all of that, but without too much convincing, I said yes – under three conditions. We find a ’78 that already had spoked wheels, we use shaft drive side covers and it can’t be silver. He said absolutely! and before I knew it, a bike was on its way from Colorado.”

After they’d agreed on the finer details, Sean got to work. Bob shipped a fresh Royal Enfield Continental GT gas tank to Motorelic HQ in Virginia and Sean started cutting it up to fit the KZ frame. The tank’s outside dimensions fit the KZ very well. The tunnel that sits on the frame didn’t, so Sean created a completely new tunnel and welded on mounting points for the tank on the frame.

Once the tank was fitted and had the right clearance for the forks, Sean set off to build and shape the seat. The new seat still lifts up using the stock lock and modified hinges – this allows easy access to the battery and a bit of storage. To finish the saddle off, it was covered in black leather sewn up by Wes at Counterbalance Cycles.

As per the agreement, Sean wanted to use shaft drive covers. “The covers closely resembled the hand-made covers on the ’79 build. Making the covers fit required moving the tabs around on the frame and moving the seat latch to have everything line up. They look and function perfectly.” At the rear, Sean welded on a café style hoop and then finished it off with a custom short fender. Bolted to the rear fender is a Motone tail light.

This particular 1978 KZ1000 didn’t come with a right-side caliper and rotor. “Finding a good used caliper for the right can be difficult and expensive. I lucked out finding one on eBay that was mislabelled as a left side. I hit the Buy It Now button quickly! I found another rotor and sent all 3 to TrueDisc to be resurfaced and drilled. Anything to help stop this beast. I lowered the front forks internally about an inch and a half and used new Ikon Dial-a-Ride shocks on the rear to give the bike a nice stance.”

Once the fabrication was finished and the lines of the bike were to Sean’s liking he dove into disassembly. All of the parts that were going to be painted gloss black were cleaned up and taken to Right-a-Way Powder. The body work was given to Danny at Knights Kustoms to give it some color. “Bob had chosen to paint the bodywork Ford Raptor Red. It’s a beautiful color that showcases the classic look of the bike.”

While everything was out getting blinged up, Sean got started on the engine rebuild. Luckily, after removing the top end to inspect it, he discovered the engine was in great condition. He installed new pistons and rings and had the cylinders honed. All gaskets and seals were replaced and fresh paint was applied to finish it off. Browning Polishing added a bright new shine to all of the engine covers and new stainless hardware fastened everything down.

After everything was back in the shop looking brand new, Sean started the assembly process. He laced up the wheels with new stainless spokes and wrapped the fresh black rims in Conti GO tires. The classic Motogadget Mini Speedo was mounted and a new wiring harness made all the electrics work as designed. To clean up the bars, some aftermarket switches and Biltwell grips were added.

When the project was finished it was time to pressure test all the hard work. “You’ve touched every single part and you hope that all went according to plan,” says Sean. “Adding gas to a freshly welded, sealed and painted tank. Adding oil to a just rebuilt engine. Brake fluid in rebuilt calipers. These are all things that have the potential for hiccups. But once the bike was running and I heard the sweet 1000cc sound ripping through the new Delkevic exhaust and all the fluids stayed in their locations, my stress level dropped.”

The last thing to do was to take the KZ for its first shakedown ride to make sure it ran as well as it looked. After a small change to the main jetting, it was time to ship the finished bike back to Colorado. “With long distance builds, the only thing I wish I could see is the client’s first reaction. Like your kid at Christmas, opening that one special gift. Hopefully Mr. Bob Kelly will love his resto-modded KZ1000 for years to come.”