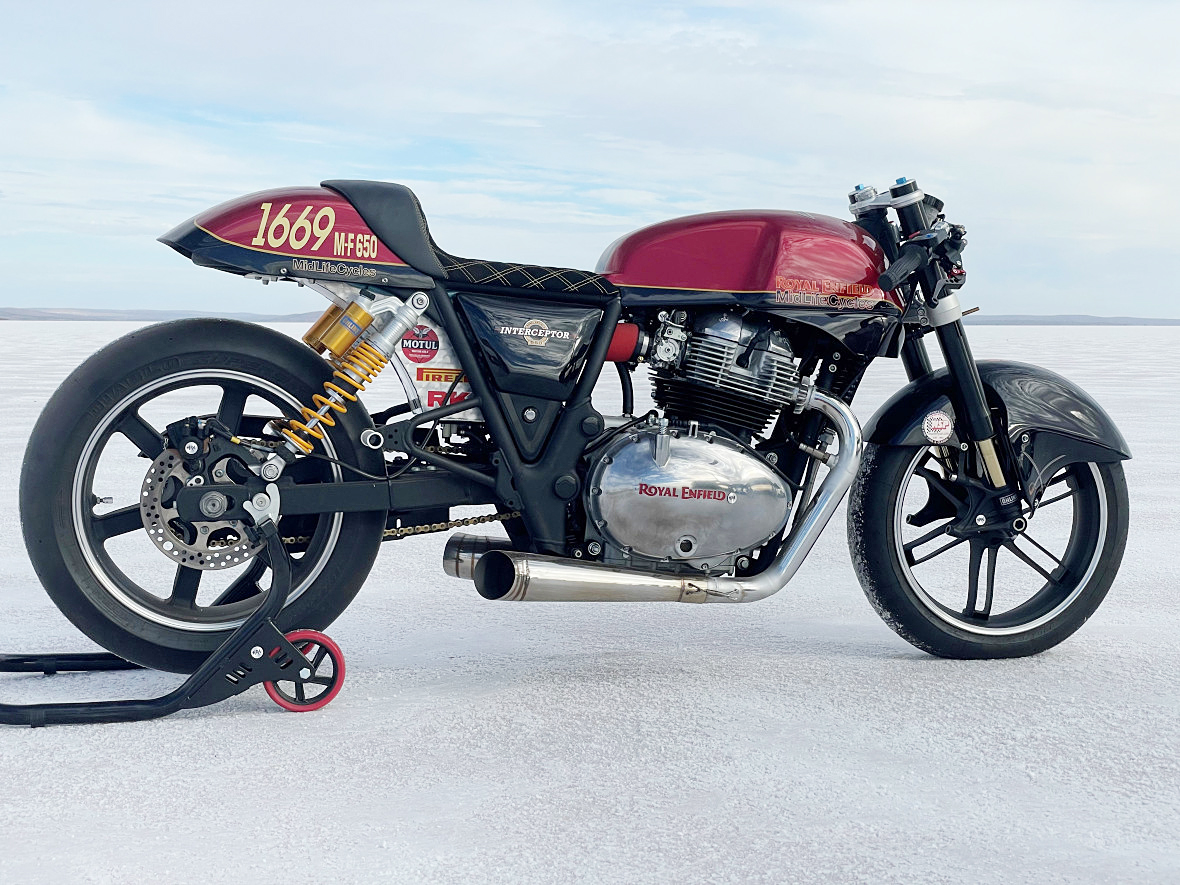 When Royal Enfield announced the development of an all-new twin-cylinder engine it appeared the company was taking the process very seriously. While some in the media had their doubts, the success of the 650 twins straight out of the showroom has been nothing short of phenomenal. But now comes news of perhaps the ultimate validation, with the Mid Life Cycles Royal Enfield Interceptor 650 Salt Racer smashing the class record at the annual Speed Week, run at Lake Gairdner, South Australia. Built and developed for competition by HRA Geelong and Hallam Cycle Works, this Royal Enfield has laid waste to the record books and has the engineers back at HQ grinning from ear to ear.

Known as ‘Sabre’ the bike was built during Royal Enfield’s “Busted Knuckles Build-Off” in 2019. Set to run on the salt and attempt some record-breaking runs in 2020, the plans stalled when Covid-19 hit the world hard. A collaboration between HRA Geelong’s Andrew and Kate Hallam, Hallam Cycle Works owner Charlie Hallam and the team at Mid Life Cycles, the project serves as a testbed for performance parts and accessories that are then available to Mid Life Cycles’ client base. While also serving as a proud example for Royal Enfield to show the true capabilities of their 650 twin platform.

Starting life as a bone stock 2019 Royal Enfield Interceptor 650, the team set about modifying the frame, engine and ancillaries to meet the specifications for entry into the Class M-F 650; knowing the class record stood at a thunderous 119 MPH (approximately 200 km/h). That might not sound insanely quick to those who rely on manufacturers claims in glossy advertising, but from a single cam air-cooled twin with just 650cc, it’s blistering. Add in the ultra-challenging environment of running on the salt, trying to maintain traction and often in very hot and windy conditions and you find an enormous respect for builder and pilot who can reach such speeds.

So to topple those standing at the top of the tree, horsepower and more of it was always going to be high on the agenda. Cracking open the vintage looking engine, the modifications are extensive and start with a balanced crankshaft that now swings a set of polished and shot-peened rods. To stay within the rules the pistons keep the capacity a factory 648cc but lift compression to an 11:1 ratio that requires 98 RON fuel. With the bottom end apart the gearbox has also been heavily modified to reduce friction as much as possible.

At the top end, HRA has ensured the cylinder head and its supporting components flow as much air as possible, with the inlet match ported to suit. The combustion chamber and ports have been heavily modified with 1.5mm over on the inlet and standard exhaust sizing, with the valves themselves being custom HRA 6.5mm stems. Tech junkies will love the cam, an “HRA Competition Profile 1286 Racing Camshaft Master, which has 106.25° inlet lobe centre and 103.5° exhaust lobe centre.” Even the throttle body has been given an extensive going over, no stone can be left unturned.

With those stunning pipes coming out each side, the RE makes a sweet sound and the horsepower is as serious as a heart attack. But putting it all down to the ground requires major chassis modifications and the custom swingarm is lengthened by the class maximum of 130mm. The suspension is all business with Ohlins forks upfront that have been stripped of their braking gear and a set of Ohlins shocks in the back. While a set of modified and lightened alloy wheels further reduce the unsprung mass and are wrapped up in Pirelli Diablo slicks.

Gearing is crucial to top speed runs and the crew tell us they use “custom-made front and rear sprockets, increasing the gear ratio up to 40% from standard.” The clip-on bars are located well down the forks to allow the rider to tuck in and lay over the tank. Which for a salt racer is a stunning piece of kit, the paintwork leaving the RE looking as good standing still as it does thundering past the timing marks. The front fender helping the air flow smoothly up and over the rider who sits pretty on a gorgeous diamond-stitched seat.

Out at Lake Gairdner and first-time salt racer Charlie Hallam broke the record on his first run, recording a 121.78mph, to smash the 119mph record. The crew was thrilled, but all fired up Charlie wanted more. “That afternoon, the Interceptor ran 130.370mph and was then impounded overnight until it could do a back-up run the next morning. This run, under increasingly stormy skies, saw a stunning 133.779mph top speed, for a new record of 132.050 MPH.” The result is a huge credit to Hallam Cycle Works and HRA, with Mid Life Cycles customers now able to enjoy the fruits of their labour for their own Royal Enfields. The oldest motorcycle company in continuous production might have simplicity as its foundation, but now their speed cannot be denied!