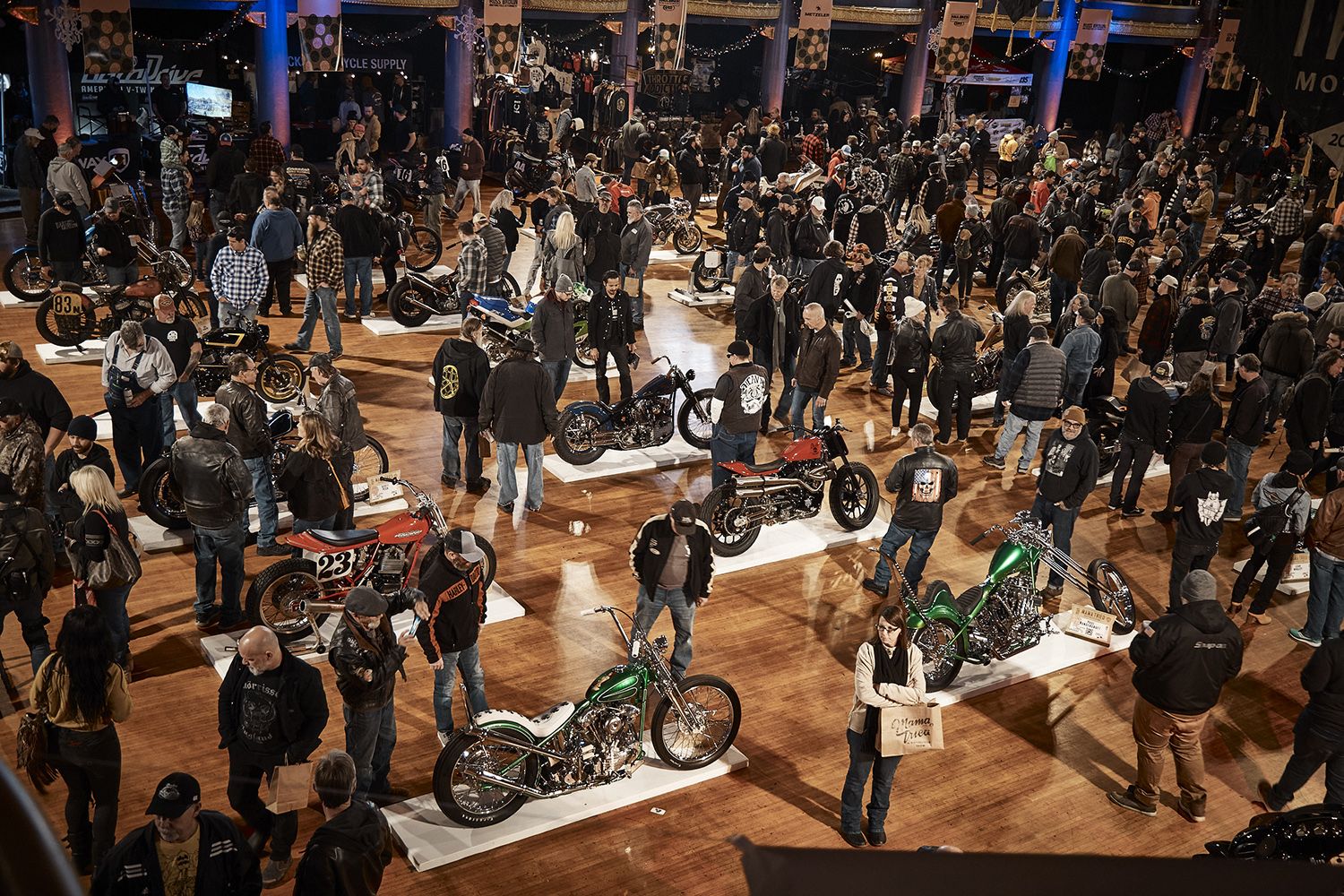 What do you call a motorcycle show that is more a party with some incredible custom bikes in attendance as patrons? Mama Tried. Held in the spectacular venue that is The Eagles Ballroom, Milwaukee, the invitational event brings the cold winter of the Northern Midwest to life, in a way only a proper shindig can. Builders, bikers, fans, and riders pack the ballroom floor to talk motorcycles, share a drink and take in the amazing machinery on display. It’s a truly eclectic group, which is what makes the whole thing so amazing, a far-out bobber next to flat tracking’s finest.

Luckily for those who couldn’t attend, Paulo Rosas from the moto gear brand Pagnol and the motorsports design and marketing studio Speed Machines Design was on the ground in Milwaukee and photographed the event for us, and all to enjoy. And like so many events over the past two years, Mama Tried has faced more than one cancellation, with this year’s banners hanging from the ceiling still wearing last year’s date. But the down-to-earth guys who put the gig together wanted it to be as good as ever, and despite the delays, the 2021 edition was a knockout.

The Ballroom in which the event is held truly sets the stage, with 25,000 square feet of wooden dance floor and a beautiful old dome roof, all completed in its 1920s regalia and having hosted the best concert performers for nearly a hundred years. Looking down from the rafters, if you could get past the bikes, the event almost looks like a Rock n Roll Hall of Fame induction ceremony, but without any of the bullshit, fake celebrities, and ego. This is where custom bikes that are drenched in their builder’s blood, sweat, and tears come to be appreciated amongst friends.

And many of our own were there to play, DesmoBibu’s Alex Maslin had his incredible Buell Blast on display, we featured his Thunderbolt from the same brand three years ago. This time he’s gone futuristic, with a very modern take on an urban scrambler, the perfect beast for any city’s back roads and an aesthetic that stands out from the crowd. Speaking of which, Marko Lazarevic’s Motorcycle Jet Ski was another head-turner, this show always brings out the wacky and wonderful.

Which is what Craig Rodsmith always does, whether he has a bike in attendance or not. The lovable Aussie with the no BS attitude did however have a bike, and what a build it is. A supercharged Ducati Monster, that once again shows off his ability to go to places nobody has been before. It’s not just the mouth-watering aluminium bodywork, of which he is a true master, but the whole mechanical mastery of a machine that lets you know how it works and looks like it’ll kick you in the nuts if you look at it the wrong way!

And that’s how I arrived at my personal favourite build of the entire show, it won’t be everyone’s cup of tea, and that’s the point. Mama Tried doesn’t just welcome those from left field, it embraces them and Hawke Lawshe of Vintage Technologies brought the sort of bike that has you standing around it, beer in hand for hours. The HD Drag/Digger is a piece of art standing still with its sumptuous amounts of gold and chrome. But oh baby, that engine, all 98-inches of centrifugal supercharged genny Shovelhead madness!

Never fear, however, if you’re a fan of classic iron, then there is plenty on display and few come better than one we know well. The ’47 Knuckle of Jordon Dickson from Union Speed & Style is simply a work of art! As far as wartime era customs go, it’s hard to think of a better piece of craftsmanship, but vote with your eyes as many of its kind were on display. And if that wasn’t variety enough for you then among the genuine flat track racers was Danny Eslick’s stunning Kawasaki slider.

A fitting vision given that Mama Tried and its organisers also birthed the highly entertaining Flat Out Friday, a wild ride of indoor flat track racing that takes place over the same weekend. This is an event like no other, where else will you see a Honda RC30 standing next to a goose-necked chopper, with neither looking out of place. So, as if in attendance, settle in with your favourite beverage and feast your eyes on the amazing machines that made it to Milwaukee for 2021.