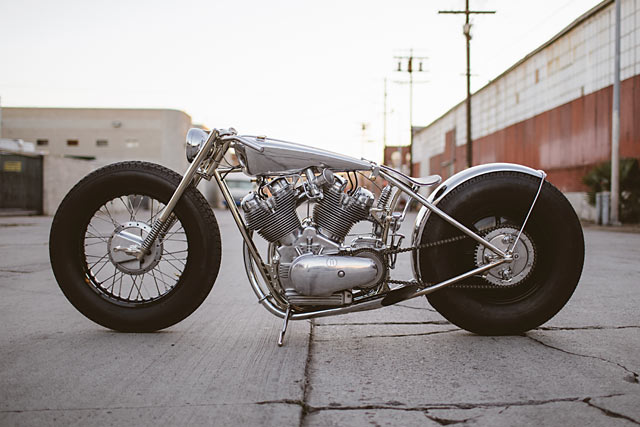 In a world full of creative minds and craftsmen he is a true renaissance man who doesn’t produce works of art to impress but simply because he is driven to. The ideas inspired by the world around him are manifest in metal with an uncompromising dedication to perfection, a standard he demands of himself. He is Max Hazan, the artisan that creates the most incredible two-wheeled machines you’re ever likely to see. For a man who never fashions the same bike twice, he’s made this one-off exception. Centred around a stunning engine that is its heart, sit down and feast your eyes on the new Hazan Motorworks ‘Musket II.’ More than just a multi-award winning motorcycle builder whose custom machines have been wowing the industry itself, Max has captured the attention of the globe by transcending the automotive world to be featured in giant newspapers like the LA Times and documented by chef and TV personality Anthony Bourdain. But none of it has distracted the man from his singular pursuit of motorcycle nirvana. His often complex creations are hand-formed using the oldest techniques; simple in nature, extraordinary in their outcome. So why go down a seemingly old path again? “I usually try to use a different engine for each bike and try to make something completely different from anything I have done before. I made an exception for this engine when a client approached me about building another Musket bobber. It’s a gorgeous piece of mechanical art on its own and there aren’t many of them around. The idea was to build a completely different bike without losing the feel that he loved about the first bike,” explains Mr H. The design process always starts the same way for Max, who puts the engine up on the bench and then the wheels on each side. Behind this is a large sheet of paper where the sketch is laid down in 1:1 scale, not only to allow his imagination to cascade out onto the canvas but to act as a template. Like the original, the heart of the beast is the remarkable Musket V-Twin engine, the brainchild and handiwork of Aniket Vardhan. In essence, it is two Royal Enfield 500cc singles, hand cast and machined to create a thumping 1000cc V-twin beast that shares the beauty and simplicity of every Hazan design. “The bike is kick only but it’s a fairly low compression motor, making about 55hp from its 1000 cc’s and is about the same as kicking over any old 500 single with no compression release. The shift/clutch linkage is one of the prettiest things I’ve ever made. It was something that developed as I was making it; I needed to find a new location for the foot clutch as I had the idea to make the left footpeg rotate and double as the kickstand and decided to have it on the actual jockey shift lever. It looks a little crazy but once you ride it for 5 minutes it feels totally natural.” But if that’s not wild enough, then the brakes take things to a whole new level with both front and rear operated by the foot pedal on the right-hand side.

Essentially a two-in-one operation, the split pedal allows you to engage both brakes at the same time, or roll your foot to the outside pedal and apply only the rear. The genius is further compounded by the fact that the inside pedal takes hold first allowing easy use of the front brake for normal motorcycle style reducing of speed. The operation of the rear brake from the pedal even gets Max excited, “I think my favourite part of the bike is the rear drum linkage, I couldn’t come up with a solid linkage that I liked, so I gave the cable setup a go and it came out pretty damn nice… and it worked just as well.”

[superquote]“the split pedal allows you to engage both brakes at the same time, or roll your foot to the outside pedal and apply only the rear.”[/superquote] All of this and we still haven’t touched on the incredible metal work that dominates this particular landscape; the signature look that lets you know this is a Hazan creation. The entire frame is made from thick wall, .125″ chromoly steel. Now that may sound heavy, but even with the enormous engine the total weight is just 385 lbs dry. “One of the challenges was to make the bike feel like it was balanced. I also made this bike 6″ shorter in length than the previous to give it a more traditional, less stretched out look.” But that still leaves plenty of room for the stunning handmade aluminium tank, with its flawless lines that sit astride the frame so beautifully. The seat is equally as beautiful, while the polished alloy continues rearward to that heaven-sent rear fender.

It wraps that incredible Excelsior rear tyre, but Max had something special in store for the rolling stock. “I went through a half-dozen wheel options before deciding to try a solid hot rod wheel I found on Summit Racing. I machined the drum from a 9″ bar of 6061. For the other side of the wheel, I machined down a 7″ bar of 6061 to house the two right side bearings as well as the 5 studs that run through the wheel in a normal 5 stud car setup. For the front, I went with a matching tyre style but mounted it to a traditional 40 spoke 19″ motorcycle rim and made the front hub from a small Honda rear hub that I reworked to run up front.” Controlling that front tyre is a stunning fork design, a unique piece that is never the same on one Hazan bike to another. Always too humble Max describes this one as, “nothing groundbreaking”. Which it really is when you consider the triples, headlight bracket and handlebars are all one piece. The liquid-like flow of the metal merges seamlessly into the legs which slide on brass bushings, while the springs were trial and error until they were 100% right. The small battery, coils and regulator are hidden in the tank creating an impossibly clean look. As a piece of art, this bobber simply superb. All the best adjectives apply, but kick it over and let those radiused pipes roar and as Max takes off down the road aboard Musket II, you can only smile in total awe and wonderment that once again we’ve been given a rare glimpse into the absolute best a custom bike can be.