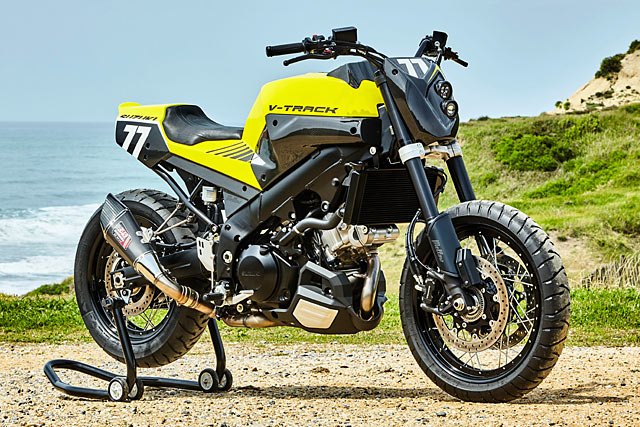 It’s a dream come true for most custom motorcycle workshops; to have a major manufacturer come to you with the offer of a new bike and a request to create a crazy custom. But everything that seems too good to be true usually is and when the list of demands start to roll out the dream can become a nightmare. Never before have so many manufacturers turned to small custom shops and yet so few have got it as right as the pairing of Suzuki and Germany’s Mellow Motorcycles. From a base of a new Suzuki DL1000 XT V-Strom that starts life as a bulky Sport Adventure Tourer. They’ve created a custom carbon flat tracker that’ll do it all, from Dakar to the drag strip, they call it Suzuki-Mellow V-TRACK 1000. Located near Stuttgart, Flo Hubert & Amir Brajan founded Mellow Motorcycles just a few years ago to compliment the other side of their business. “We are also running a “regular” motorcycle workshop since 1997,” Flo explains. With all work carried out in house and five full time employees it’s a successful company going from strength to strength. Suzuki Motorrad Deutschland couldn’t miss them, with Mellow Motorcycles machines gracing magazine covers, winning awards at EICMA and claiming victories in the Sultans of Sprint. But the request by Suzuki was going to provide a hell of a challenge for the team. They wanted the Adventure bike customised to compete in the ESSENZA sprint class for 1/8th mile drag racing. They also wanted the parts used to be easy to produce in kit form so they could on sold to the public and in tracker styling would be nice too. Oh and in case it wasn’t hard enough, no cutting of the hard to work with twin spar frame and all electronics, ABS and other factory features like the Bosch 5-axis IMU had to remain. You’d forgive Flo and Amir for being overwhelmed by it all but totally undaunted they stripped down the big V-Storm and got to work. “We shaped everything out of clay to get a feeling for the right dimensions and good proportions.” To start things off small they crafted the killer carbon front cowling, picking up design cues from the factory side panels. The complex details make forming the carbon a tricky task, but with two LED headlights moulded in, this is one of the best race plates for the road we’ve ever seen. “After shaping the whole body out of clay we built a 100% carbon fibre monocoque with 2 extra carbon fibre side panels to give the bike a slimmer and lighter design,” Flo casually explains of his masterpiece. The whole unit uses the factory mounting points and ingenuously covers all of the electronics and other gubbins you don’t want to see. The visual transformation is remarkable with the Adventure bike taking on a futuristic flat track design. The whole single piece was then painted in the factory Suzuki yellow, with just the right amount of exposed carbon and graphics to suit. But under the carbon fibre body work are even more examples of Mellow Motorcycles incredible craftsmanship as Suzuki had made more requests; retain the standard fuel pump and fuel cap. So to achieve this an aluminium tank was hand formed to squeeze around the airbox while mounting perfectly to pick up the stock pump. With all the effort going into the bike a simple cow hide seat just wouldn’t do explain the lads, “Its special naturally tanned leather called YAK-leather. It´s originally from Tibet and got tanned in Finland. The Mellow stamp is another detail you´ll find on every Mellow Motorcycle.” To transform the ergonomics to match the design Mellow Motorcycles raided the LSL catalogue and picked out a set of suitable rearsets. While up on the stock risers a set of LSL’s Flat Track bars are joined by the company’s fully adjustable levers. With such an advanced electronics system the switch gear remains factory, allowing the rider to select a variety of rider modes, traction control levels and motion track braking system that provides incredible performance on loose surfaces. But you couldn’t do this without also keeping the factory instrument cluster and yet again a little Mellow magic hides it half sunk into the fuel tank’s cowling. The hardware of the braking system is just as impressive with Tokico mono block calipers clamping a set of floating twin discs. The suspension is fully adjustable with front forks being 43mm items from Kayaba. Thankfully Suzuki also lashed out on wheels in stock trim on the XT model with Enkei tasked with producing lightweight spoked items for the task which are wrapped in Michelin all-purpose rubber. Powering the party is Suzuki’s 1037cc 90° V-Twin that delivers a healthy 100hp from the factory and a stonking 103nm of torque. It’s the pulling power at any engine speed that makes it such a fun engine to use, and easy with a slipper style clutch, anti-stall and 3 mode traction control. Stripped of much of the factory plastic cowling that normally shields the engine the exposed big twin adds to the overall aesthetic. While punching out some extra ponies and giving a grunty growl comes courtesy of a R-11 Yoshimura carbon can. So with the weight well down and the power up, how fast is she? “At the first race at the Cafe Racer Festival in Montlhery we finished the race in 3rd. place. It was never the goal to build the fastest bike – we wanted a Flat Track style bike – but the result is ok for such kind of bike.” OK? The winning bike was the purpose built Indian drag machine from YGSS running Nitrous, I’d say that’s a bloody brilliant result! And not only can the Mellow machine run the 1/8th mile its more than capable of riding at extreme speeds in any conditions and looks a million bucks standing still. It’s a truly remarkable achievement to create such a brilliant all round performer, constrained by imposed limitations and please Suzuki, we want one!