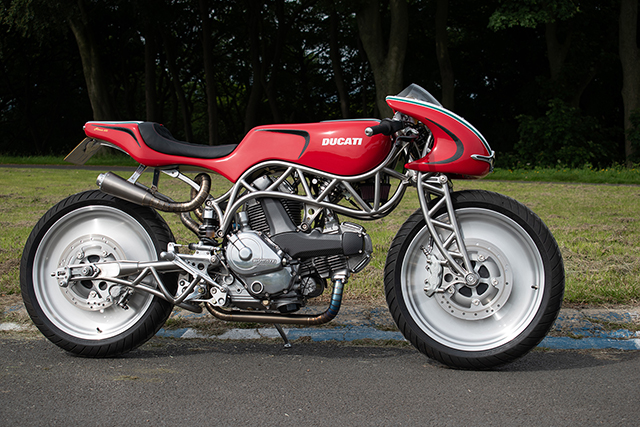 In the European guild system, the path to becoming a Master Craftsman is a long and laborious task that ensures only the very best in their field rise to the top. The final chapter of the process requires the building of a masterpiece so good the heads of the guild elevate the aspiring journeyman to the ultimate status. Already there in metal fabrication, Jim Alonze has found a way to add industrial design and now carbon fibre creation to his incredible skill set. So, in his downtime at Alonze Custom, Jim has crafted an incredible Ducati Monster 600 that combines the best of modern materials with supreme old school craftsmanship. 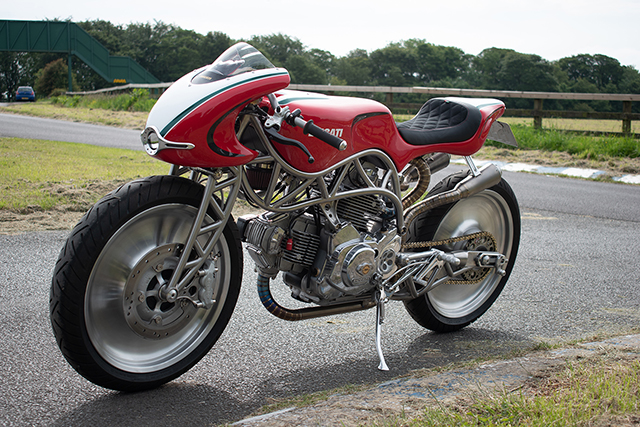 Jim and his father Dom run Alonze Custom in the seaside town of Scarborough, North Yorkshire, and with 50 years combined experience the quality of work is exceptional. But they don’t actually build custom bikes, their focus is on two-stroke exhaust systems and general high-level fab. Motorcycles are built after hours, “I just do it in my spare time. In winter I’d go back after my tea for a few hours pretty much every night and then do the weekends too. I get really stuck into them and won’t slow down until they are finished,” Jim explains. 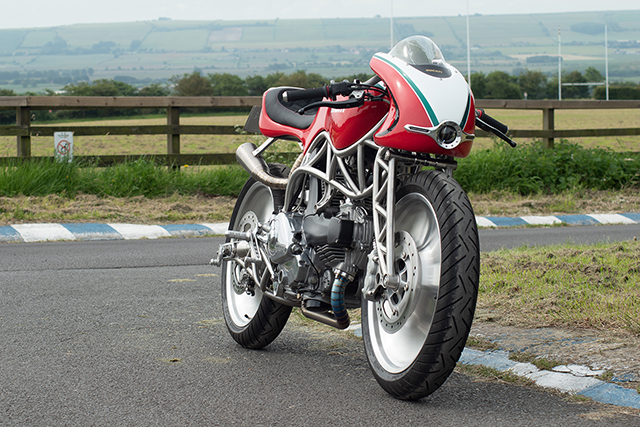 A similarly relaxed approach is taken to the design of each build, with an idea first coming to mind and then Jim grabbing a pencil and paper. “I don’t use any fancy computer design stuff I literally just scribbled down some sketches until I came up with something that looked cool.” A quick gaze around the shop at some bits that were laying around and Jim had a theme they’d fit into. And having received such high praise and exposure for his previous Ducati build this was a chance to go one better. 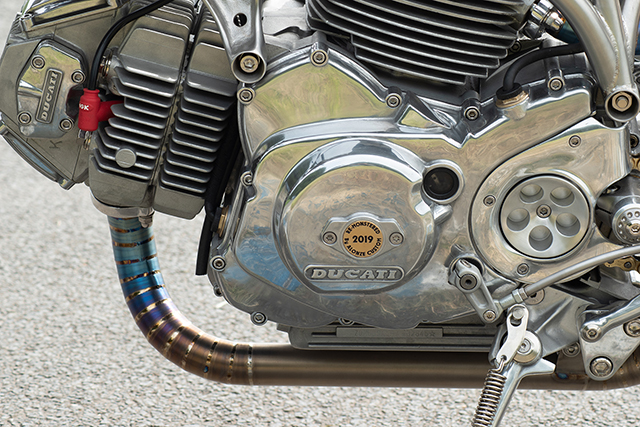 Knowing what engine he was after he went on the hunt, “I found a mid ’90s M600 donor bike, it was in a bad way but I didn’t mind as I knew I wouldn’t be using much of it. Basically all I used from the bike was the motor, the rear caliper and the rear shock. Pretty much the rest of the bike has all been hand made in house at my workshop.” So with the bare engine as a guide Jim started work on the frame that he’d previous sketched up, the organic lines of the incredible trellis frame providing a deliberately slim profile to match the Boardies of old. 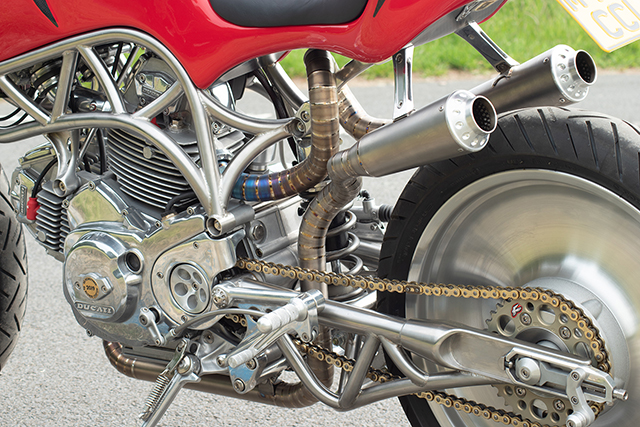 For most people the completion of such an incredible chassis would be a moment of pride and relief, but next Alonze wanted more of himself. “I really wanted to test myself and do something that I hadn’t done before. So I made the girder forks from scratch.” Again all the designing was done in a sketchbook before the welder was switched on and all the milling was done by hand utilising a manual machine. The classic design is brought into the modern era with custom radial mounts for the twin disc brakes and a fully adjustable shock. 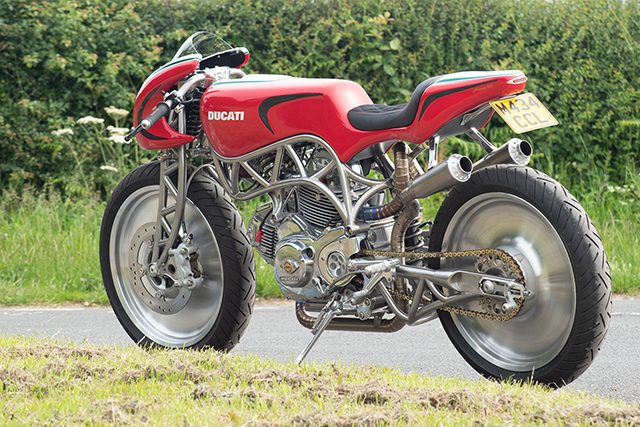 The rolling stock helped set the theme, “I happened to have the 19” Harley V-Rod front wheels laying around in the workshop for years.” And the tall solid brushed items wrapped in modern rubber give the bike a 21st-century board track racer vibe. Controlling the rear is an all new swingarm, once again a masterpiece crafted by Jim’s hand with a frame matching trellis design that also includes all the modern touches like quality chain adjusters securing the axle. With braking coming from a large rotor clamped by the factory Ducati parts, one of the only stock items. 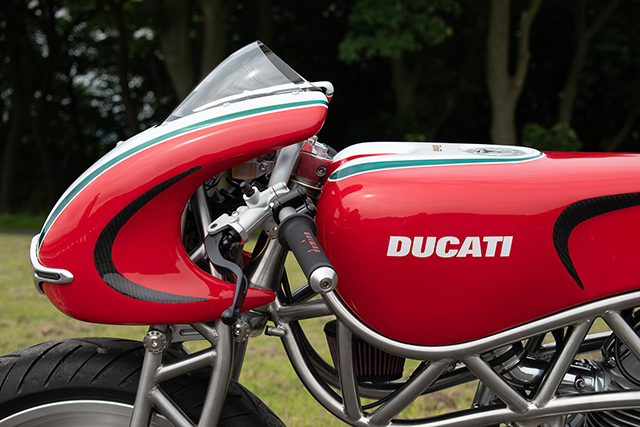 You could forgive Jim for resting on his laurels, but wanting to master a new skill he set about making the bodywork from carbon fibre. The skilled metal man clearly found his feet fashioning a gorgeous monocoque body and nose cone over many hours. The paintwork is no less impressive, with the classic tricolour scheme laid down with hints of carbon fibre allowed to shine through. Then there are the details like the indicators integrated into the exhaust hangers and the stunning lines are left undisturbed. 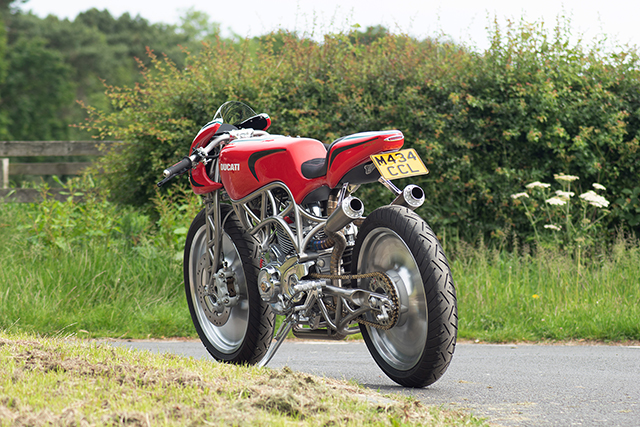 Of course the project is powered where it all began, the 600cc Ducati engine brought back to life and topped off with carbon belt covers and a hell of a polish. But try as you might you just can’t look past the truly glorious titanium exhaust that was of course made in house and snakes its way rearward. In addition to the perfect welds, the system also features custom mounting collars and WSBK style shotgun end cans.

There are simply too many amazing handbuilt parts to mention, hell Jim even made the perspex screen. But while most of us would call this remarkable build a forever bike, Jim plans to sell it and begin another project, “to be honest I just enjoy building them”. And you start to wonder what could possibly roll out next, from the humble and highly skilled Alonze Custom workshop. 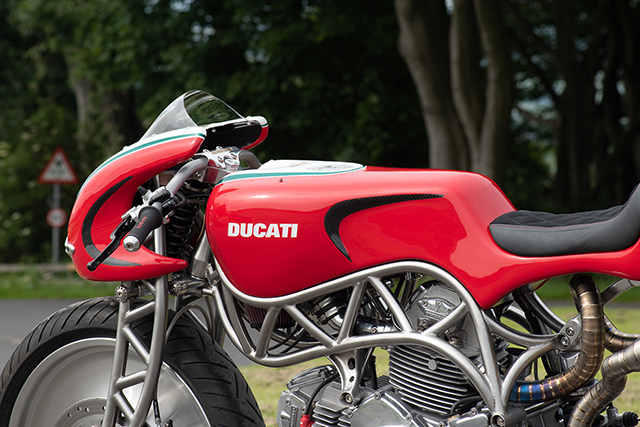 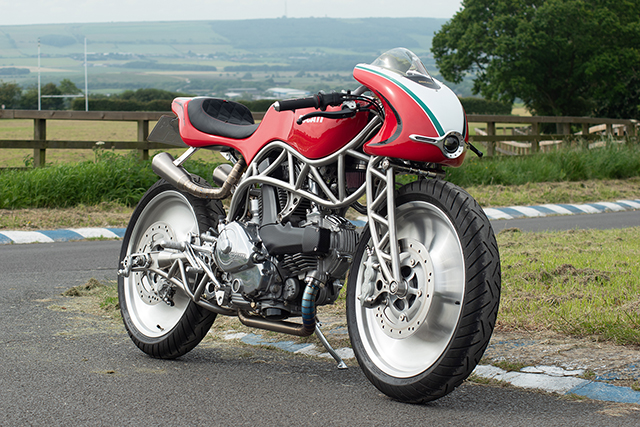 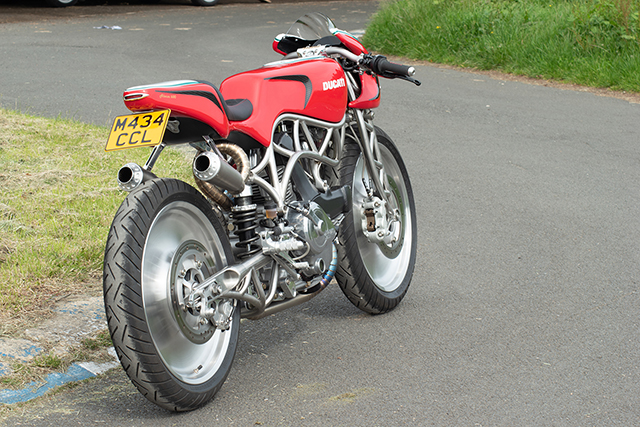 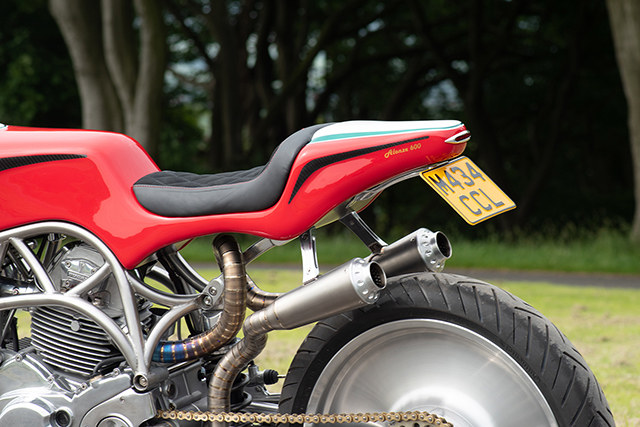 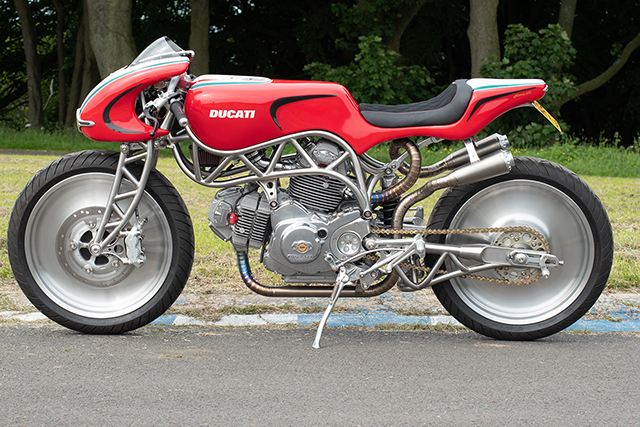 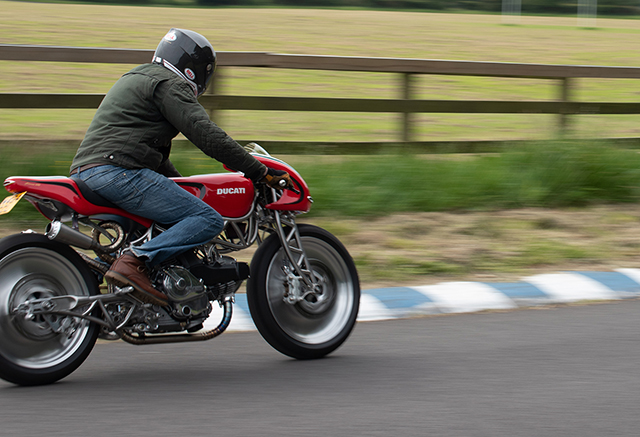