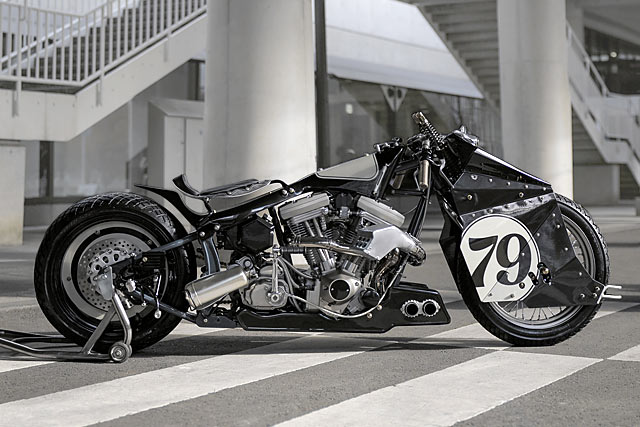 Among all species of creation there are occasionally specimens who are malformed in whole or in part; the most grossly abnormal of these have been referred to from ancient times as monsters. The name connotes something almost evil, physically intimidating, possessing unseen levels of power and generally considered freaks of nature. And as soon as you glimpse the first image of Beautiful Machines insane 1991 Harley Davidson Heritage Softail you know the name Monster fits. It’s been five years in the making at their workshop in Sunway, Malaysia, where it has been a passion project for head honcho Rajay Singh. The final incarnation rolled out of the Beautiful Machines laboratory just in time to make a splash at the recent Yokohama MoonEyes Hot Rod & Custom Show. While motorcycles are popular in Malaysia, it’s not the first place you think of when custom bikes are first mentioned. So to change that Rajay Singh and Eng Chin Guan established Beautiful Machines to build full custom creations that would put their nation on the map and Monster was always part of the plan. “Monster was built initially for Art Of Speed 2016, which we did manage to turn a few heads and won Best Of Show, and subsequently an invite to get a booth and show our bike at this year’s 25th Anniversary Yokohama Hot Rod Custom Show. That just blew our mind as we would be the first ever Malaysian bike to be at the show,” explains shop engineer Irwann. The build takes inspiration from an eclectic mix of designs, including a Leica M3 camera, a ’50s Biplane and even the stance of a Bison. But to get things started all that hideous Harley Heritage-line bodywork was unbolted to reveal the Softail frame. To get the long and low look the front of the frame has been stretched and modified with a neck chop to boot. The change in geometry and increased rake would have played havoc with the trail but Beautiful Machines are always one step ahead. The standard telescopic forks are no more with a short leg, hand-built, springer front end in their place. The brass fittings at the top of the springs help retain the springers vintage feel, but wrapped in that bodywork it’s nothing short of madness. Rather than simply modify an existing piece or use a dustbin fairing, it’s all hand crafted in-house. Trial and error plays a big part in the creative process but the skeleton is a round bar subframe that supports the entire structure. From here the shape of the panels was forms to flow with the rest of the bike, a mix of hard angles and smooth steel create an imposing aesthetic. How often do you see a race number shielding the front wheel? Carefully placed openings allow the springers linkages to be exposed with matching brass and chrome fittings holding it all together. With such an incredible piece of bodywork hovering over the front wheel the rest of the sheet metal couldn’t disappoint. Next the team turned to the tank and once again have knocked it out of the park. Considerably smaller than the stock unit in every possible way it neatly plays its roll while letting the engine take centre stage. The tanks sheet metal seamlessly wraps around the frame so that one component morphs into the next. These lines run all the way along the back bone where they blossom out to form the ruthlessly sharp rear fender; truly this black Harley rose’s thorn. The seat might be minimalist, but it didn’t come easy. “In the case of Monster, the trickiest thing was deciding on the kind of seat we wanted. Who knew that it was a seat pan that became the last detail to get right for the bike. In the end we settled on a floating seat that gave her a different posture that balanced everything up for us.” The negative space it creates only helps to further accentuate the contrast of the frames smooth lines with the fenders wicked edge. While to balance out the bodywork at the top of the frame, the side panels that shield the exhaust visually bring the whole bike closer to the ground. But for all the physical presence of the Monster much of it comes from its menacing eyes. The over under headlight arrangement gives it an alien feel. With the hand beaten bodywork and textured brass rings providing an organic element that brings it all to life. The hand formed metal work continues on the top of the front end from where each bar emerges, complete with brass grips. The controls are minimal, beautifully crafted and the electrics have been cleverly hidden away. The final piece of metal fab is the trick primary cover, a hand welded aluminium piece with bead making up the detail, the art work, the Malaysian flag. The engine is literally a monster and while you can’t take your eyes off that huge Aisin AMR500 supercharger hanging from the side, the motor is much more than that. The classic Harley 82ci Evo was originally built as an angry naturally aspirated engine, bored out, forged pistons and high-compression heads all from Screaming Eagle. But when the spot at the Yokohama Show came up “we knew we had to prep Monster further for this, this was when we decided to supercharge her.” To get it done the S&S carb now sits to the lower left of the engine with beautiful lobster cut piping connecting the entire system. Taking the lessons learnt from their blown Yamaha SR the pulley runs a belt off the enormous open primary drive. With air first being drawn from a unique airbox that was hand fabricated and mounted on the opposite side of the engine. The exhaust system is equally spectacular, crafted like the induction pipe it takes an unusual turn to the front of the engine. Here it exits with twin outlets on each side, four in total, that poke through the body work. But the basics haven’t been neglected either, big dollar components, braided lines and a custom oil tank keep the engine healthy. And yes, that’s a kick-start tranny on the side. But the mechanicals haven’t been left there, even their operation comes out of left field. Look above the clutch pack on the crazy open primary and you’ll see the beginning of a linkage. Through pure genius and 6 individual pivot points the gears are now selected thanks to a peg setup that is pure drag bike. With all that power to manage the Softail has also been converted to chain drive and the sprocket choice hints at some plans for a run on the strip. But when Guan fires her to life the lumpy, normally aspirated idle becomes a whirring blower roar as the revs build and you can’t help but giggle as the earth shakes. The rolling stock is not just for show, but a sign of what’s to come, a tall skinny tyre up front to cut through the air and the spiral solid wheel at the back leaves a monster’s foot print. So what to do with all that power now that it can be put to the ground? Having made their mark in Japan, 2017 will see this Harley Monster head for the salt flats of Bonneville where the Beautiful Machines team want to show their creation has the bark to match the bite. Which explains the fire extinguisher disguised as a nitrous bottle, with a Malaysian Monster this wild, spitting flames is just par for the course. The plans are for less weight and even more power as this monster morphs into a missile, time to draw straws to see who can tame the beast.