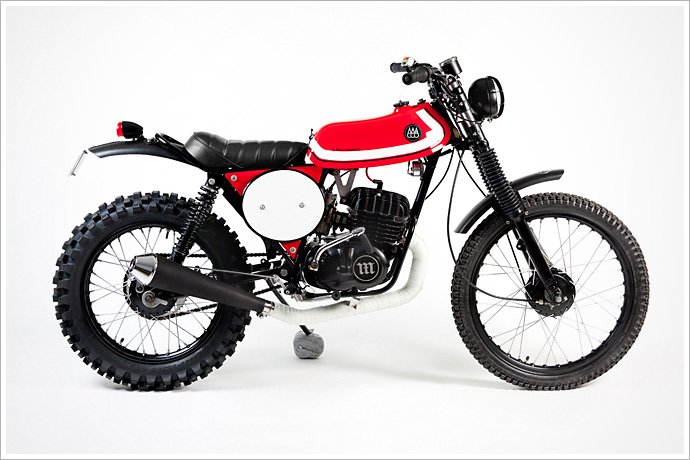 Sometimes when it comes to customisation, less is more. Small touches can make for better build ideas than large sweeping changes in the course of a build. This can help to keep the original spirit of an already cool bike, whilst making the machine unique in own right, something not all builders are capable of. It’s definitely something that Macco Motors has now shown they can accomplish, in only the second build released from their workshop in the south of Spain. After being brought a barn find 1976 Montesa Enduro 75L, the two brothers have added the Macco Motors touch, while following the owners words: “I want people to put their touch on it, but I want people to say that’s a Montesa Enduro…” and isn’t she gorgeous? With the brief for the build being to keep the bike looking like a classic enduro, the Macco Motors crew got to work. As with their first build, the Kwaka 1100ST featured here on Pipeburn, a good part of the custom metalwork was done inhouse. Custom steel side panels, aluminium number plate holder and exhaust header show the flexibility of this firm in their metal skills, showing there is little they aren’t afraid to make up themselves. To keep with the essence of the bike, an enduro style headlight has been fitted, and in true classic dirtbike style a single tachometer adorns the Rizoma handlebars. At the front sits a Pirelli MT013 tyre, at the rear a wider than factory Pirelli Scorpio MX, both topped with Macco Motors guards. Marzocchi E81 suspension has been deemed up to the task for rear suspension duties, the Montesa seat has been swapped out for a street tracker style seat, albeit these choices help in keeping Macco Motor’s desire for the bike to keep it’s ‘Spanish Soul’. In relation to looks, the bike is amazing. That 70s styling holds strong, with small details like Macco Motors badging adorning the rebuilt engine, the factory tailpipe being replaced with an upswept Dunstall style silencer. The frame, engine, panels and guards have all been given a new coat of paint, giving it a ‘just rolled off the production line’ look, while the wide rear tyre gives the diminutive bike an awesome (aesthetic/presence) when viewed from the rear end. With this being only the second build the brothers have completed, this is just proving our prediction that the Macco workshop is one to look for in relation to awesome builds. From an awesome big banger Kawasaki, to this baby Montesa, it is proof of the quality that Macco Motors can produce, and the scope of bikes they are willing to work with. The only thing to ask is: what’s next?