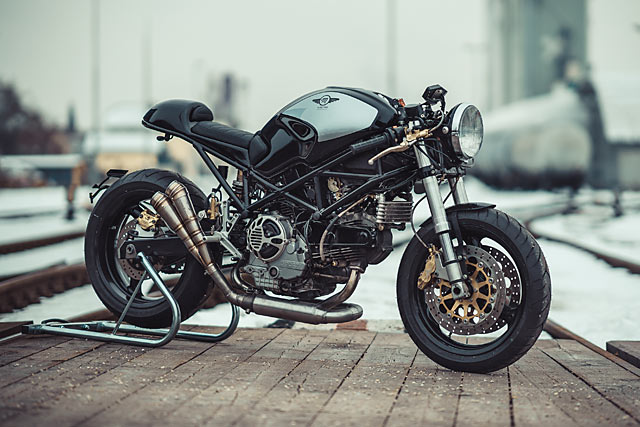 At the Southern end of Austria and just a yodel’s throw from the snow-capped alps sits a small town called Feldkirchen in Kärnten. It’s home to some gorgeous Austrian architecture, thousands of transient German skiers and NCT Motorcycles – a custom shop of incredible quality and impeccable taste. While they most frequently find themselves massaging bespoke BMWs, this time around they’ve diversified and produced this stunningly simple cafe racer, based on a 2001 Ducati Monster 900ie. Astute readers of Pipeburn and other, lesser bike blogs will notice more and more Ducati customs appearing in the last twelve months. Part of me thinks that it’s because every twin shock old Japanese shitter has now been rattlecanned black, fitted with Firestones and skidded off the road in the first light shower. But the better part of me likes to think it’s because we’re collectively realising how good some of these mid-life Italians are. Providing they’ve been serviced, old two-valve Ducatis are reliable, handle well and offer usable power for the street. But the owner of this Monster isn’t new to the marque. He actually purchased the bike brand new off the squeaking showroom floor all the way back in 2001. And it was his first motorcycle. It’s a long way from the battle-scarred DR250 held together with duct tape and hormonal enthusiasm that I learned to ride on. But I’m probably not NCT’s target market. [superquote]“NCT listen intently to their clientele and follow their instructions to the letter.”[/superquote]

National Custom Tech Motorcycles have a particularly Austrian approach to bike-building. Whereas some workshops treat a brief as a vague guide rather than express instructions NCT listen intently to their clientele and follow their instructions to the letter. In this case it was to craft a lowered, cafe’d take on the old Ducati Monster.

With well over a dozen bikes under their belt, NCT have the build process pretty much down pat. The motorcycle is completely reassembled, parts trimmed, blasted, powdercoated and painted before being reassembled, with a lightened loom and myriad of bespoke and aftermarket parts to cap it off. Sounds simple, doesn’t it? Well not quite. David Widmann, who founded NCT in 2015 is no stranger to bikes. He’s been riding and banging together his own rides from the tender age of 5 and prior to starting the shop he worked in the steel manufacturing sector. But even this relatively straightforward build threw out a challenge or two.

[superquote]“And all it takes is a good eye, shitloads of man hours and a lifetime of experience.”[/superquote]

In this case it was the seat. Made in-house from fibreglass it took countless hours to get right. But look at the thing – those angles, the gorgeous extra padding and smooth contours. Ladies and gentlemen, that’s how you design a seat. And all it takes is a good eye, shitloads of man hours and a lifetime of experience. The other hurdle that David and his team tackled was the Ducati’s snaking 2-1-2 exhaust. While the early mock-up looked and sounded fantastic, David figured the vigilant Austrian highway patrol wouldn’t appreciate the straight through throaty roar of a well tuned v-twin. So it was taken apart and fitted with some more baffling, which was packed into the centre section of the pipe that runs under the sump.

Other parts came together much more easily. The indicators with in-built brake lights, the clipons and subdued paint scheme all make this cafe Monster look gorgeous. There’s no one real part that screams, and it doesn’t shout ‘custom’ like many other bikes do. It’s a subdued riff on the original bike that the owner has loved and ridden for over fifteen years. It makes me wonder – what could NCT Motorcycles do with an old DR250?