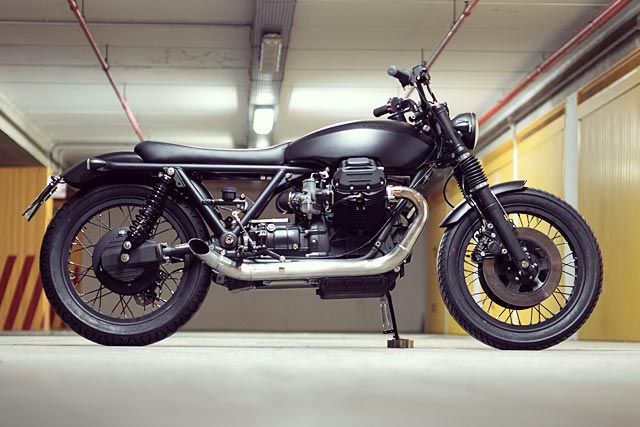 In almost every major religion and from ancient mythologies around the globe the Crow, or similar appearing Raven, makes an appearance. The legends are as much as 60,000 years old and although the authors never met, somehow the theme of death is common to them all. But when seeing a murder of the black birds flying past Abruzo’s Filippo Barbacane had an idea to build a bike that would push past the basic stereotype. A black beast that not only had the varying shades of black that crows display, but built with the brilliant intelligence they possess and a timeless appearance to honour the ancient gods they so often represent. From the home of the world’s most amazing Moto Guzzis, Officine Rossopuro delivers us a killer 850 T3 called ‘Corax’. For this build Filippo could have picked almost any Guzzi for the project, but in the T3 he chose a machine not only a favourite amongst the fans of the marque but also a classic design to appeal to the themes ancient roots. The design process was simple for Barbacane, “Starting from this was born the idea of making a motorcycle that had a low profile, a compact bike and its black colour enhanced by its features. So I realised a completely new bodywork, from the low and flowing lines that wrapped the chassis.” The bodywork might have a factory appearance but it’s all made from scratch in-house at Officine Rossopuro were doing anything less is simply unacceptable. Fashioned with a mix of old and new techniques Filippo has made it an art form, offering up each piece to the frame before returning to his work bench to further refine each section. The lines of the tank share the side crease and capacity of the standard but that’s where the similarities end. The new item is more curvaceous, has neat recesses for the rider’s knees and the perfect cut outs for the muscular V-Twins cylinder heads. But that’s not where the fancy metal fettling ends; the filler cap has been flush mounted so as not to disturb the swooping lines that form the top of the tank. But the pièce de résistance is what appears to be the raised factory filler inlet and is instead the housing for the single gauge speedo, neatly tilted back to catch the riders eye. The hand rolled rear fender is generous in proportions but without being the enormous piece that originally came from the factory floor. While the front guard is another custom piece, just enough to keep the stones off without ruining the newly crafted lines. With the major metal pieces finished off a new seat base was built to suit and the foam shaped to match the lines of the tank and frame. But before selecting the right leather to wrap it all up in Filippo emphasises his point, “the main idea was to make a completely black motorcycle, but not just paint it all in black but have a balance between various dark tones.” So just the right classic black leather was chosen before the different shades of black to complete the look were selected. The major pieces are all finished in a matte finish, while details like the rear shocks and starter motor are treated to a glossier hue. Raised black gloss lettering spells out the bikes name while the engine has been finished in a black textured look. But before it was painted the 844cc 2 Valve V-Twin and gearbox were pulled from the frame and placed on the bench for a full rebuild. No matter the condition of the bike or even if the engine is to remain relatively standard no project leaves the shop without being treated to a total engine overhaul. New gaskets and seals throughout, parts replaced where required and a complete set of new bolts have her purring like new. The twin carbs draw their air through a set of foam filters but it’s the spent gasses that make the roar. Oversized header pipes run rearward to even larger midsections before the exhaust finishes out at the pegs without turned shorties for a thunderous sound. The exhaust is one of the few things that is not made by Filippo, fabricated by MASS to supplied specifications for the exact look Filippo had in mind. With one order out, another was placed with Borrani for a set of their aluminium rims in black, even the spokes were powder coated the hue with just the nipples sent for chrome. With modern rubber mounted up and the lightweight wheels reducing unsprung weight that helps handling and braking. But things weren’t left there, the front forks were pulled down and rebuilt with progressive rate springs and out back a pair of big dollar Bitubo shocks take care of business. The twin front discs and single rear, that give the bike the T3 name, remain the factory hardware on the outside with modern upgrades added to greatly improve the Guzzi’s stopping power. Steering duties fall to a pair of low-rise bars, a much nicer look than the touring style items that come from the factory. Which wear just the basics, a nice set of grips, modern single switch block and a new more powerful master cylinder. The rest of the wiring has been neatly hidden in a special cavity under the tank, while the battery sits in a custom housing under the gearbox. Lighting duties fall to a smaller headlight and classic style indicators in black with clear lenses, even a few spots of amber was too much colour for Filippo’s liking. While a clever piece of electrical work means the rear indicators also act as the brake light to spare the intrusion of red on this bad in black beast. The end result from the Officine Rossopuro shop is “A bike ready to be used both in the city and on our beautiful mountain roads, with a classic but at the same time ‘bad’ look.” There is no murder of crows here, just one single killer flying solo and once again Filippo Barbacane has shown he’s not to be messed with when it comes to build the very best Moto Guzzi masterpieces.