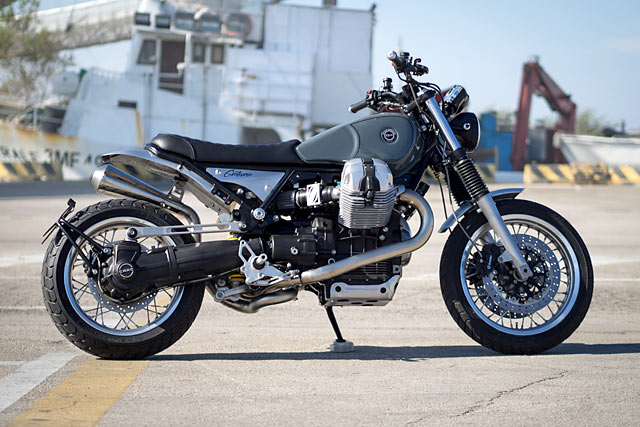 I’ll say it again. Moto Guzzis are like heroin. You don’t dabble in it, you don’t do a bit on the side. If you’re into Guzzis you live and breathe for them. And it turns out this addiction cripples shops as well as owners, as shown by Italy’s Officine Rossopuro. While they’ve produced scores of custom bikes over the years they’re nearly all of the Guzzi inclination. And their latest build continues this single-minded obsession with a modified Moto Guzzi Bellagio. Meet ‘Gimkana’. Don’t feel too left out if you haven’t heard of the Bellagio. It’s never gained much traction outside of the Guzzi nut crowd – but those nuts absolutely loved it. Head of Officine Rossopuro, Filippo Barbacane, is one of them. ‘The Bellagio is easily the most underrated motorcycle produced by Moto Guzzi,’ he says. ‘It combined the most positive aspects of the old Guzzi – a chassis derived from the famous Tonti, the two valve engine with dual spark ignition and less complicated electrics… but mixed with the best new aspects of Guzzi design’. [superquote]“He loves the Bellagio so much he owns one – and of all the Guzzis in his garage it’s the one he rides the most.”[/superquote]

Those new aspects were the CARC (the separate drive shaft housing that prevents the bike rising up when accelerating), the rear swingarm design and adjustable suspension. ‘All that allows you to have a very simple and vintage-looking motorcycle with excellent rideability in all conditions’ Filippo says. He loves the Bellagio so much he owns one – and of all the Guzzis in his garage it’s the one he rides the most. I know he says it’s good looking and to many it is. But to my eyes it still errs a little too much on the cruiser side of the equation. But Officine Rossopuro wanted to change that – albeit not completely. ‘I didn’t want to modify the frame of the Bellagio too much,’ Filippo says, ‘It’s already great. I modified the back a little but that’s it.’ Instead he turned his eye to shedding as much weight from the bike as possible. ‘Weight is a very important element to consider when I build a bike,’ he says ‘I often think that it’s more important than outright horsepower.’ The man’s right. For this reason he created a new set of aluminium bodywork, including fenders, sidecovers and tank which shed no small amount of weight. As well as making the bike sound a whole lot better, the new 2 into 1 exhaust system also shed a stack of kilos. The engine, which has a reputation of being long-lasting and reliable was left largely unmolested. In terms of running modifications not much has changed. Aside from the exhaust new air filters were also installed, saving more weight and opening up the standard airbox area under the seat. That new real estate now houses the electrical system and a new light lithium battery. There’s a few tidy smaller details as well – the adjustable footpegs were designed in house (and are now for sale, if you’re one of the Bellagio fan crowd) and risers were also added with new handlebars and brake reservoir. Interestingly for a Guzzi of this style, the team have added a bash plate underneath the bike. Officine Rossopuro have thought this through. ‘The Guzzi’s engine guard prevents damage to the engine from off-road use,’ Filippo says. ‘The Bellagio wasn’t designed for this riding, but now I can easily run the bike on poor quality country roads without any problems. It makes it more versatile, which I think is the most desirable thing on today’s bikes.’ It might just be me, but I’m noticing more and more people tackling unpaved roads on bikes that would never have been down them in the past. And that’s no bad thing. The whole package is one that Filippo thinks sums up the best parts of the current custom scene. ‘I think people are getting more focused on the use of the bike and what you can really do with it,’ he says. ‘I love to build bikes that are rideable, ones that can be used often and not just beautiful’. And so do we, Filippo.