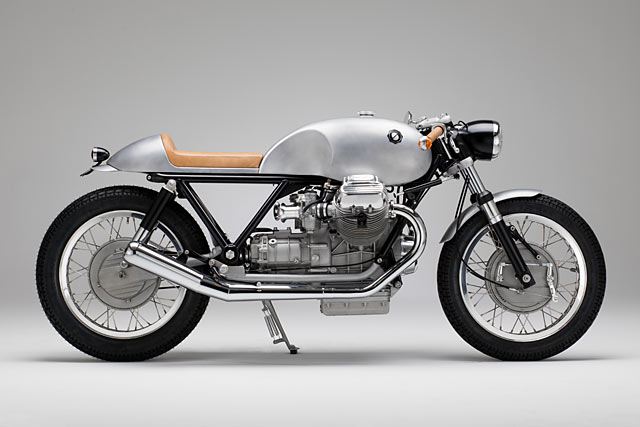 For decades scribes in motorcycling publications around the globe have been consistently using one word to describes the machines of Moto Guzzi, and that’s ‘beautiful.’ But for a brief period in the early ’80s the company produced some real horrors, none worse than the fully faired wind brick that was the Le Mans Mk 2. So it is a testament to the absolute skill and dedication of Axel Budde of Hamburg’s Kaffeemaschine that he’s used the ugly base to build this gorgeous creature. It’s all the very best bits of Moto Guzzi, with German engineering and know how, to produce the picture perfect cafe racer code-named KM912. 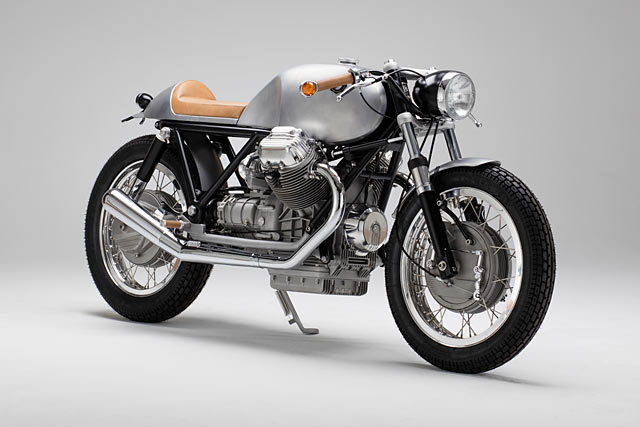 Axel has been crafting stunning Moto Guzzi customs for a while now and that success has resulted in some changes at the shop. “A partner joined Kaffeemaschine in April, so I have an employee and a much bigger and nicer workshop now. We hopefully can even increase my quality and standard that way. More output than 2-3 bikes a year, like it was, when I was on my own, would be nice, too.” explains Axel. But lifting the standard on the incredible bikes he already builds is no easy task. 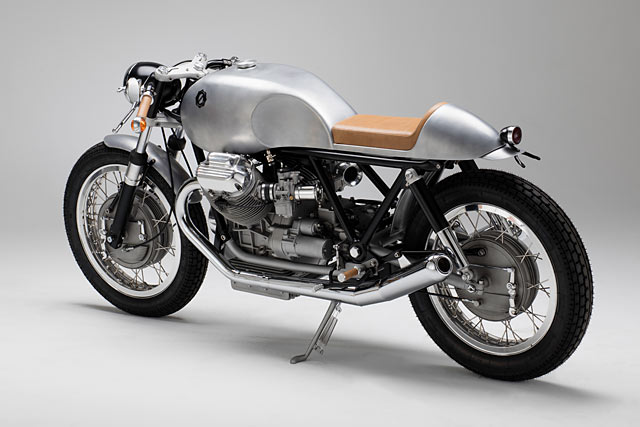 The client had seen a previous build by the Hamburg outfit and loved what he saw, that bike is KM19 and the major differences requested over that previous build was to have a single seat and be an even more sporty ride. Done and done thought Axel, as he could see the design take shape in his mind, but first he had to find a donor. The Le Mans Mk2 makes perfect sense as the bare bones are excellent, even if the factory looks leave something to be desired. And an encounter with an old ship captain located a suitable donor, in good condition and at a fair price. 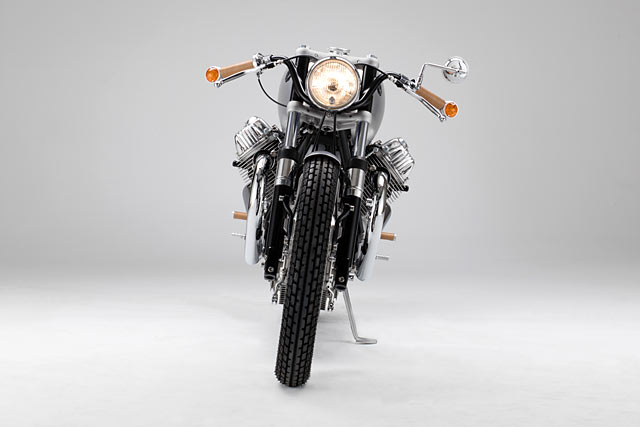 Hoisted onto the operating table, Axel is like a surgeon as he slices and dices a Moto Guzzi apart with surgical detail until he has a pile of parts that will then be treated to their own unique makeover. Knowing the path well-worn on piecing together a custom Guzzi, the frame could be smoothed out, the appropriate new brackets fabricated and all other holes and factory gubbins ground back and deleted. The shaft drive swingarm has also been heavily modified to accept the rear hub and brake change to come; deleting discs is not so easy! 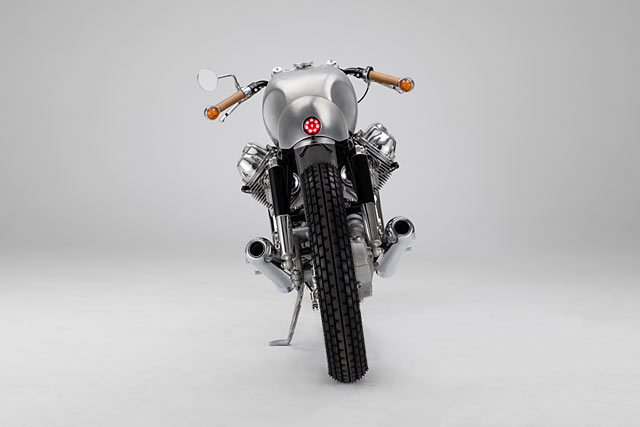 While he was working his magic on the rolling chassis, Axel sent out his body work designs to one of the best fabricators around. Shaped from 2mm aluminium the lightweight panels replace the boxy factory design and deliver unadulterated, raw cafe racer visuals that only the pictures can do justice. There is also a hand rolled pair of fenders from the same material and a machined filler cap to top it off. Axel builds the integrated headlight/handlebar combination himself, but he’ll tell you it’s no easy task, “It’s a massive effort and a pain in the ass.” But boy it looks good! 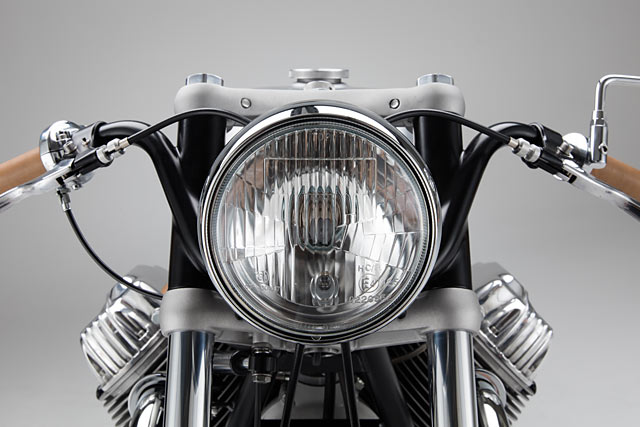 Those bars turn a set of Le Mans Mk2 forks in the front that have been completely rebuilt and with the lower legs modified to accept brackets for the modifications to come. The most visible of which is the big daddy double duplex brake hub that adds endless old school cool. The rear also features a drum brake hub with meticulous attention to detail taken to create the cable operated mechanisms. The extra weight is controlled with assistance thanks to the addition of a steering damper. While sleek high-shouldered alloy rims finish out the roller and are all wrapped up in Heidenau rubber. 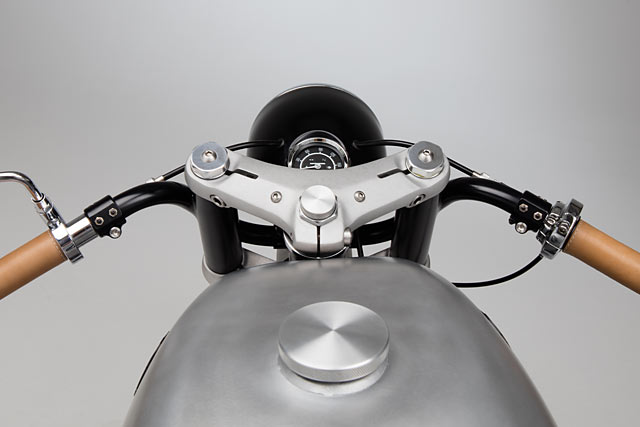 The driveline has looks to die for but it’s also been given one hell of an overhaul with literally nothing left untouched. No longer 850cc, the big Italian V-Twin has been blown out to a full litre of capacity with the compression increased thanks to new pistons. The entire bottom end is rebuilt and every gasket and seal has been replaced as the engine was assembled. Showing just how far the Hamburg outfit will go in the pursuit of perfection, there is even a conversion to twin spark for a complete burn. 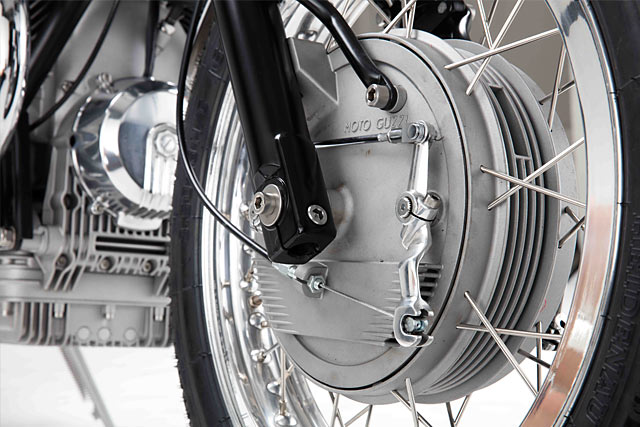 The Dell’Orto carbs have undergone their own precise rebuild with a re-jet to suit the growing fuel demands. Wearing a stunning pair of house made velocity stacks, Axel points out that the rubber carb boots are two of the only components bought in that haven’t been modified. Inside the casings is a new cam, lightened flywheel and a modified clutch to handle the extra power; which is now a stout 90hp at the rear wheel and truck loads of torque. To finish out the package is brilliant set of Kaffeemaschine stainless steel pipes and mufflers. 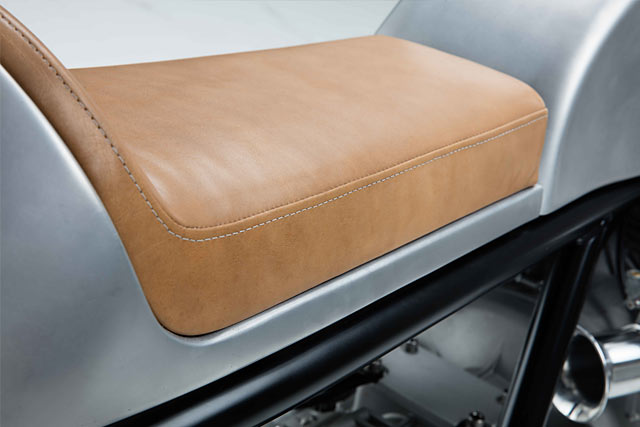 The entire machine has been given a painstaking re-wire with absolutely none of it seen for the cleanest of looks. Then there are the details like the Swiss clock like foot controls that are precision perfect and flawlessly integrated speedo. To wrap up the build light tan leather accents were added across the seat, grips and pegs that yield an amazing contrast against the raw metal surface. It seemed a tough ask for Axel to raise his game, but in rolling out Moto Guzzi KM912 the Kaffeemaschine shop have more than delivered: with a painfully beautiful cafe racer that sports mercurial mechanicals to match. 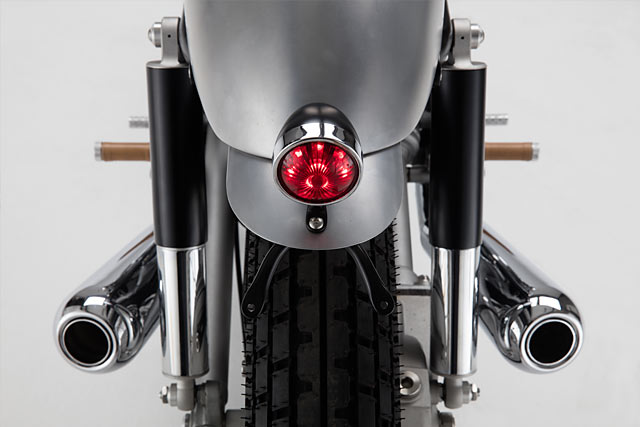