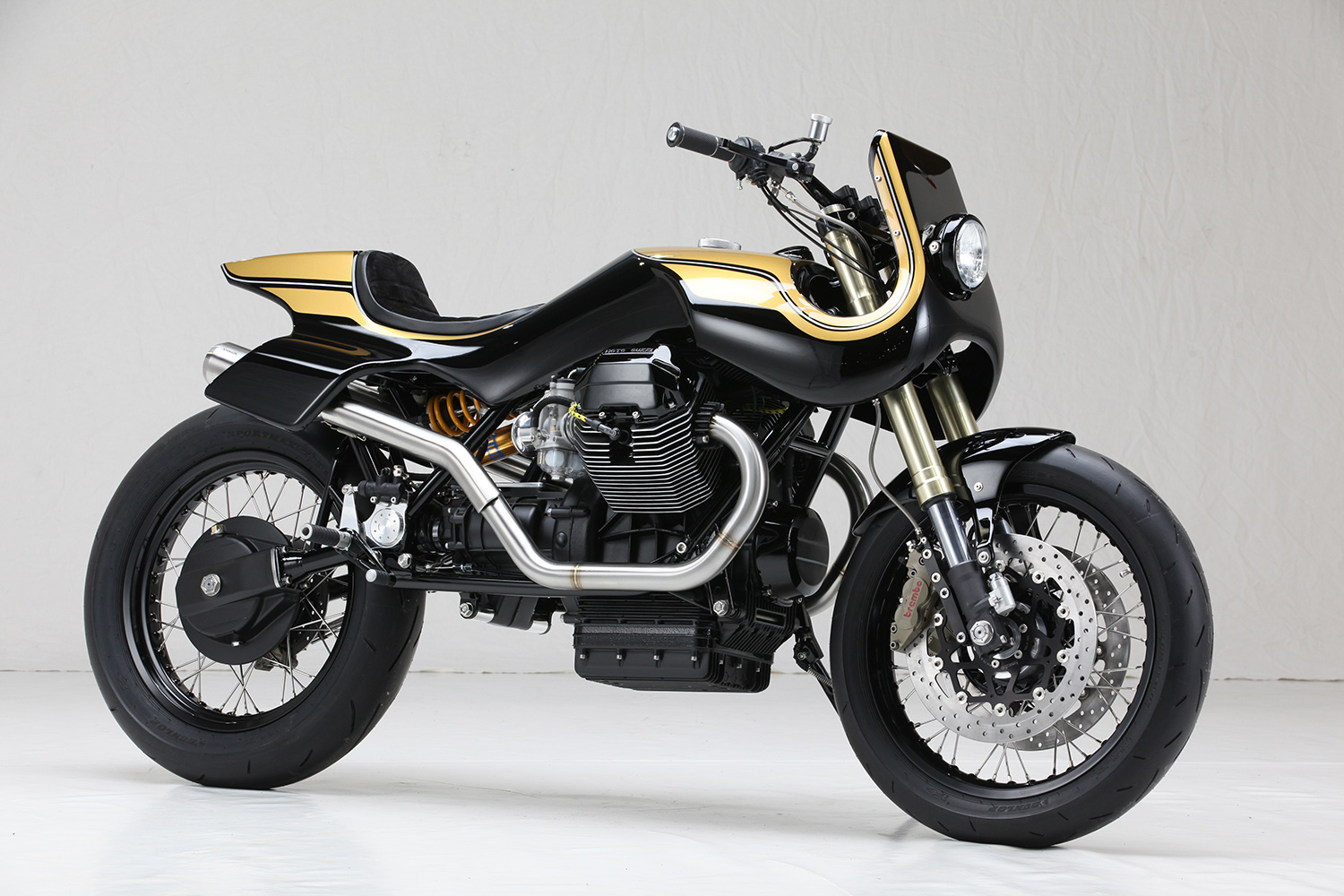 When you start a new business there are generally goals you want to reach, both in terms of the achievable, that will keep the bank manager happy, and the big dreams of breaking new ground. In the late ’90s with a love for all things automotive pumping through his veins, Gianluca Tiepolo founded Stile Italiano and simply refused to place a limit on what could be done. With a close team around him they’ve done it all, served as a bike dealer, raced at a national level, acted as an official importer for some of the world’s biggest brands and built an endless number of cool customs. But once a year they build something truly remarkable in their signature style, a black and gold monocoque masterpiece, this time based on the beloved Moto Guzzi Le Mans 850.

The last time we saw such a machine from the team in Northern Italy, it was their all-conquering Norvin, that dominated the European show circuit and reached number two in our own 2020 bike of the year awards. A whole host of motorcycles have been treated to the look, with handmade single-piece bodies in the stylish colour combination laid down over everything from a Laverda, to a BMW, Harley, Bimota, Norton and even a Vyrus 985. With a love for the heyday of the Cafe Racer scene, they’ve also built an array of Tritons, Noriels and of course that incredible Norvin. But now it was time to bring it all back home, an all-Italian team going black and gold on a home country icon.

They have built a signature Moto Guzzi before, but that bike was in the style of a vintage racer, this custom would venture more into the tracker style and as Gianluca says, “the monocoque is the only way to get the perfect flow of lines.” In a sense, the donor could have been almost any Guzzi, but when you’re going to be spending hundreds of hours on a machine, it needs to speak to you. So the team opted to go for one of the marque’s all-time great bikes and the Tonti engineered Le Mans offers the perfect basis for just about any build.

With the Stile signature style meaning the body and colour choice were already predetermined, the crew needed to create the foundation for the build. The heavily triangulated Tonti frame came in for some serious modifications, with every last inch of metal smoothed out, the headstock prepared for a front-end change and new stainless bolts and custom machined caps used throughout. For the ultra-clean lines that Gianluca had in mind, the twin shock rear end would never really work and so the decision was quickly made to give the monocoque a mono-shock. To achieve this a custom tubular swingarm was built in the same exacting style as the frame and a gusted upper mount was added.

To get their new creation rolling, the team started to assemble some of the best bits in the business, without going for a look that was so modern it wouldn’t fit with the overall theme. In the rear end, a remote reservoir Ohlins shock hides away nicely, and a custom underslung Brembo disc setup handles the braking. At the front end, the forks are Showa, with gold anodised stanchions joined by black lower legs and custom triple clamps that are perfect for the style. Brembo calipers are mounted on custom built brackets, and the wheels are completely handbuilt with stainless spokes and purpose machined hubs.

Now the process of creating that single skin could begin, and despite the enormous experience the team has in creating such objects of desire, there is simply no escaping the fact it is an enormously labour intensive task. Brilliantly shaped from aluminium the whole thing begins with a hammer and an English wheel, always offering up the shapes to the bike to make finer tweaks to the detail.

Not only does this piece incorporate the rear number boards into the combined seat and tank design, but the flowing lines wrap around the new suspension and swing upward to also add the front plate. The look is simply beautiful, hugging the Tonti design in an unbroken line from start to finish.

Underneath is a building masterclass that you don’t see, from the front fairing stay to the integrated tank and the clever subframe mounts, it all helps to create an illusion that the single piece is floating over the bike almost unrestrained. To do it all justice the paintwork has to be picture perfect and the entire bike is hit with a base of gloss black.

The old school gold goes on next and is neatly broken up by silver pinstriping, with all of the paint used to further show off the custom bodywork’s lines. In a similar fashion, the seat slots into the metal like the saddle on the back of a racehorse, and has been stitched in a combination of leather and Alcantara.

There is simply no part of the bike that has gone untouched, with the engine detailed within an inch of its life and painted up to match. A custom stainless exhaust helps to unlock more horsepower and looks simply amazing, finishing out in a set of one-off Virex mufflers.

The big carbs get their own machined velocity stacks and even the plug wires have been wrapped in black and gold shielding. The controls are a mix of custom rearsets with beautiful linkages and new flat bars on a chunky set of risers. Then you notice the details, like the matching machined steering nut and fork caps.

The signature style of Stile Italiano is always instantly recognisable, and yet the genius of it all is that no two of the bikes ever look the same, leaving this gorgeous Guzzi to break new ground all of its own.